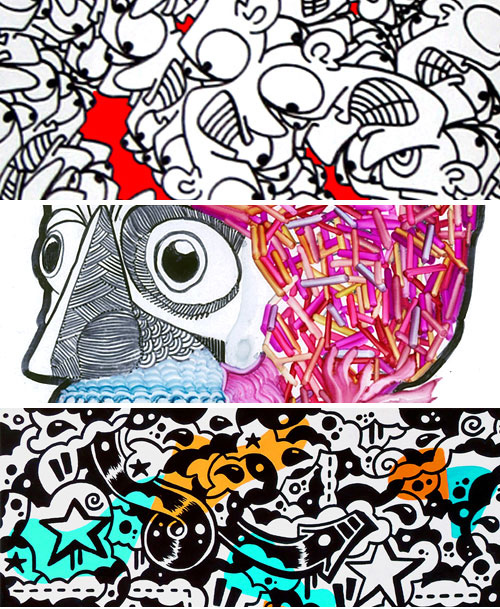 The March exhibition at Black Book Gallery is going to be a powerhouse display of three well-established, international street artists: OTTOGRAPH, GALO and 2501, all accomplished in their craft and all bringing their big style and influence to Denver.

Big style is not just a metaphor. Ottograph, Galo and 2501 all work large. 2501, for example, reads spacious surfaces like animate objects and then gives them the dignity of character they deserve with paint. Born in Milan as Jacopo Ceccarelli, the name 2501 marks a deliberate style shift and focus on blending wall painting, paint on canvas, sculpture and video. Circulating between Milan, Sao Paulo and Berlin, 2501s work is best recognized in massive, highly detailed mural paintings. They are pretty amazing and give new meaning to the term, urban renewal.

Ottograph, also a large-scale muralist, has been slinging paint since the age of ten. Starting out in Amsterdam, where he is from, and then moving on to become an internationally sought after artist, Ottograph has established himself squarely in the middle of the global street and graffiti art movement. Simultaneously though, Ottograph has bridged the fine art gap with his work, an advantage that comes with age and time dedicated to painting. The Modern Art Museum of Antwerpen (Belgium) is home to a giant Ottograph mural. Ottographs contribution to street art extends beyond his own work, as he is also a community leader, having organized several cooperative painting commissions and operating the website I Paint Everyday www.ipainteveryday.com to encourage the tedious, yet necessary practice of serious painting.

Hailing from the same underground culture in Amsterdam, street artist Galo, will be the third of the group showing at Black Book Gallery in March. Originally from Italy, Galo moved to Amsterdam in 1998 to start his career and fell into opportunity after opportunity to paint. This is where Galo developed the bulk of his artistic abilities and a network that would take him on a world-class tour of painting, spanning ten years and four continents. Galo now resides in Italy and has recently opened the first official street gallery in Turin, The Galo Art Gallery (Ottograph was commissioned to deck the interior out). Galos signature characters are recognizable by their bulbous eyes, long jaws and open-teeth smiles, most of the time intertwined into a tessallation-like graphic, spanning whatever surface it is that catches Galos attention. In part, he is known for his willingness to tag anything in sight.

Black Book Gallery is located on the West side of Santa Fe Dr. Santa Fe is a North bound one-way street. Meter free parking is available on both sides of street.

BSA Film Friday: 11.16.18
D*Face / AGAINST THE WALL / MOVEMBER FOUNDATION Suicide is the biggest killer of men under the age of 44. In this short film, street artist D*Face discusses his own issues with isolation and loneline...
Portraiture by Case Maclaim and Helen Bur in Madrid for Urvanity 2021
Frankfurt-based ultra-talent Case Maclaim is with the Urvanity Art Fair this week, and he has created a new mural in Madrid's old, historical city center. His work is being shown by Brussells Ruby Ga...
Banksy Hoax, Does Dutch Master Remix of "Girl With the Pearl Earring"
Two things in the news today about Street Art man of mystery, Banksy: Thing 1: He was not arrested, cuffed and covered with a shroud yesterday as reported and re-Tweeted throughout the street-art-isp...
Know Hope, Icy & Sot, and Eron Produce "The Distance Between" in Berlin
Somber and sorrowful, this distance in between. Distance between people geographically, politically, ideologically. Distance between dreams and reality, between what is possible and what we achieve. ...
Koralie's Trippy Folk Precision is Harmonized for "Indigo Blood Project"
Former French Street Artist Koralie is currently having an extensive solo gallery show of paintings, sculpture and installation with Johnathan LeVine Projects in Jersey City, and her geisha is not har...
2501 Black Book Gallery Brooklyn Street Art Colorado Denver Galo Ottograph