Since 2004 artist Ryan McGinness has been at work on a series of round paintings on canvasses and on wood panels he calls “Black Holes”. He completed the series in 2010 and, since December,  twenty-four of these paintings have been running at the Phillips de Pury galleries in the Meat Packing District of Manhattan. Influenced by skateboard culture, poster design, and graffiti, the artist synthesizes the energy from the street in this entrancing collection. 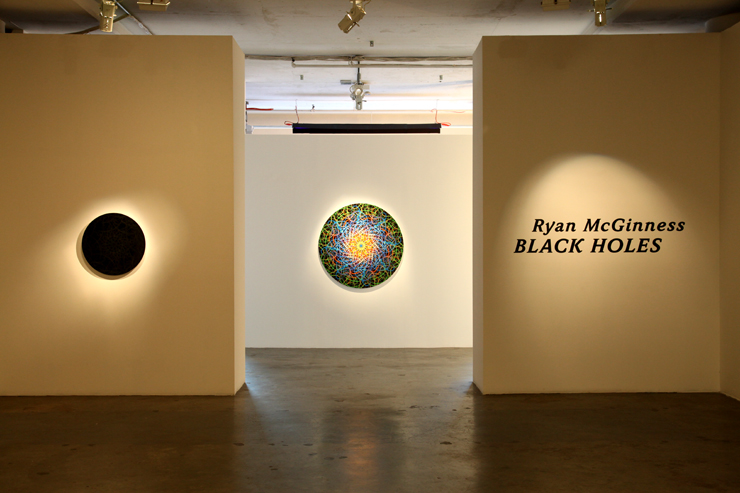 The Black Holes paintings, blasting flourescent arabesque patterns too crisp for hippy psychedelic reveries, will instantly mesmerize you and draw you ever further into them. It’s a natural high, and suddenly it is apparent why they are called “Black Holes”. 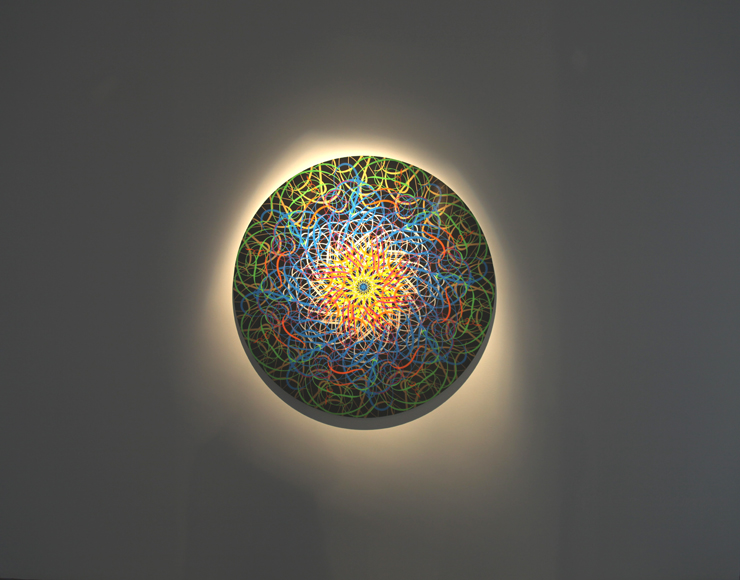 The labyrinthine floor plan of the galleries assists your light infused discovery of increasingly vivid contrasts and pattern and color until suddenly you find yourself lost in a dark universe of exploding stars. From the gallery’s press release we learn that the panels comprise layers of screen printed concentric symmetrical “event horizons” which McGinness defines as the “point in space-time before which everything disappears into the black hole”. 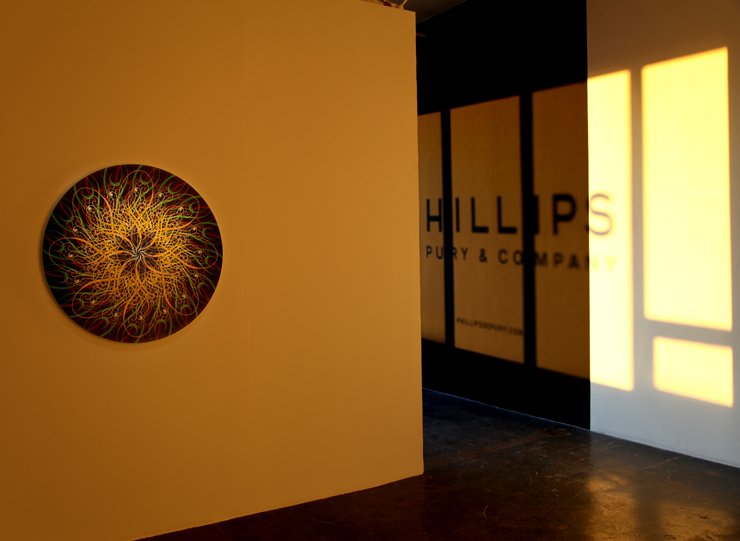 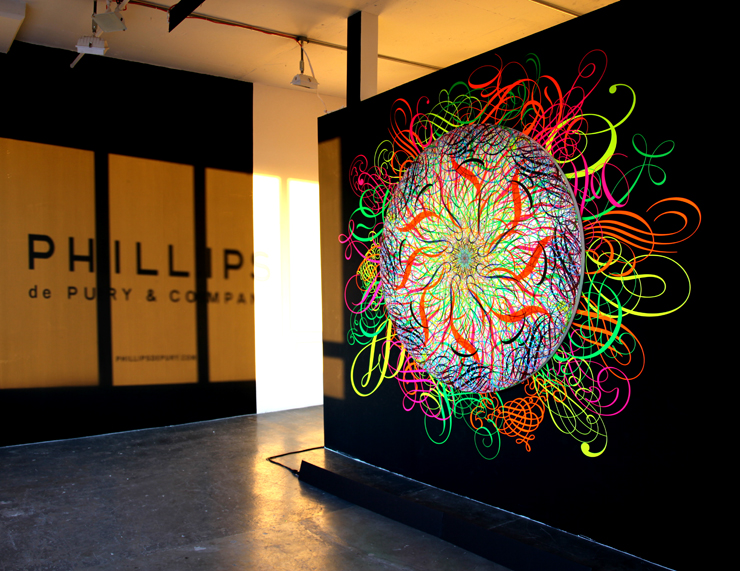 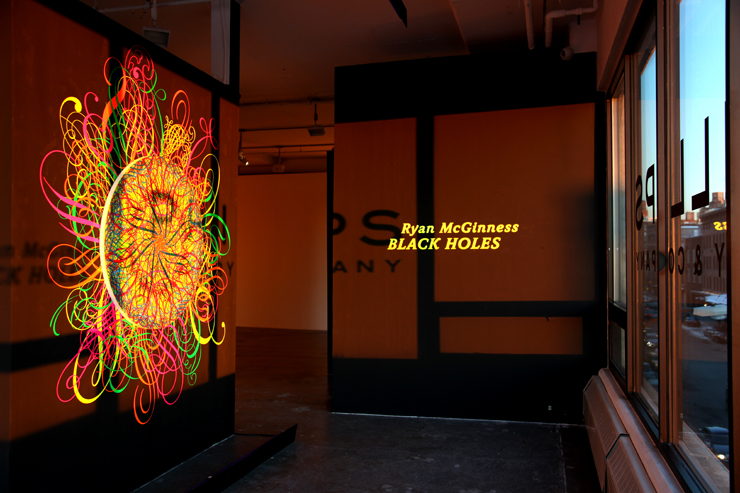 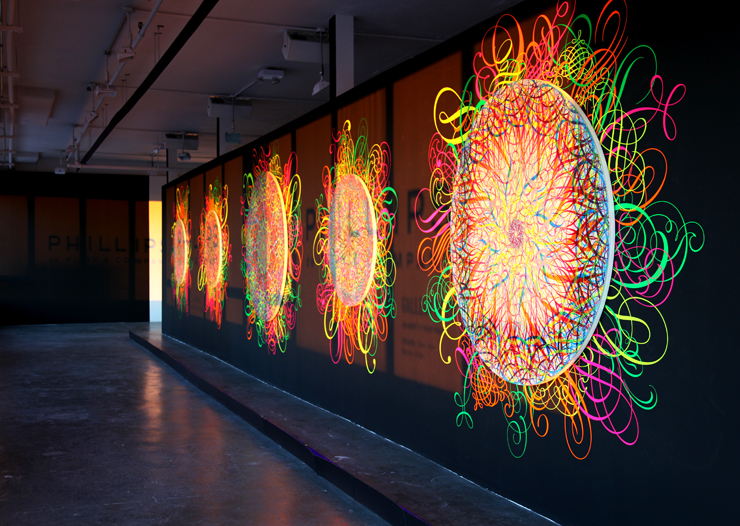 As the sun is setting on the public walkway called The High Line that rises above this part of Chelsea, you can enjoy the show from your vantage point in the public sphere as well.  McGinness has created ten site-specific large-scale paintings positioned along the gallery windows facing the High Line and at night these paintings are illuminated from inside the gallery to give the public an experience of a black-lit extravaganza.

As the outside light fades the flowering glow of rich pungent color punctures the pale winter grays – rather, laser cuts it. The paintings escape from the confines of the canvas and run like newly freed ivy through the windows to meet you, a surreal garden of exotic flowers no longer behind glass. 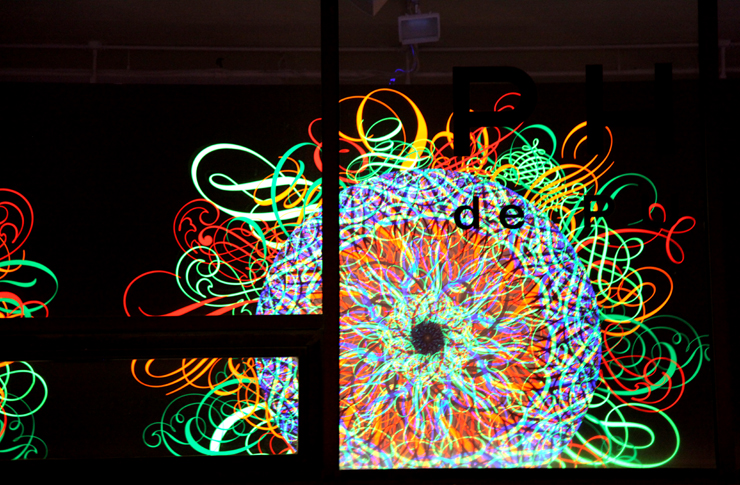 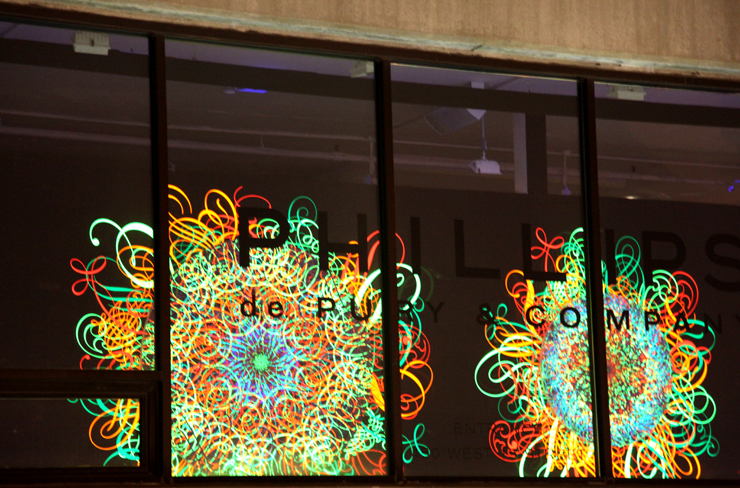 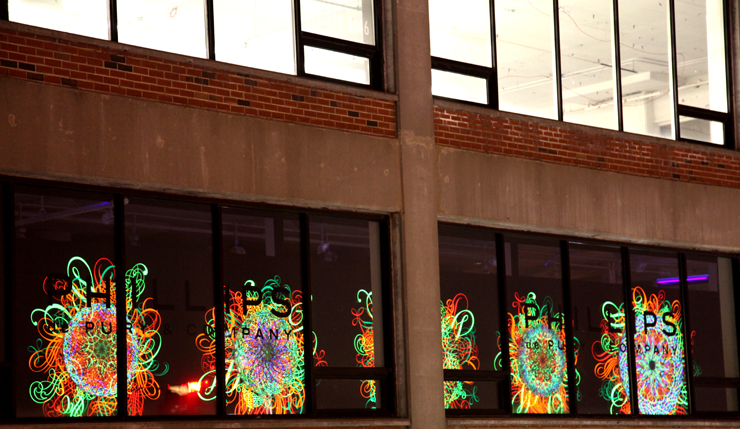 If you do go to view this portion of the installation from the High Line, it’s good to know two things; the park closes at 8:00 pm and the last entrance to the park is 7:45. Also, to see the paintings from the High Line one must look up slightly as the pieces are not precisely at eye level and the bottom portion of the paintings is lost. If they were hung a little higher the windows could better frame them without cropping from this vantage point, but maybe that would have made the indoor show off-kilter. You could also wear platform boots.

“Black Holes” is up until March 8

Images Of The Week: 04.06.14
Here's our weekly interview with the street, this week featuring Bob J, Bradley Theodore, Damon, EC13, Jerk Face, KK, L'amour Supreme, Martin Parker, Nick Walker, Rockit, Sampsa, Shok 1, Swoon, ...
April Showers...
Yes, it's April 1st in Brooklyn. And of course it's raining all day today. But you know what they say: April showers bring May flowers. Truthfully, New Yorkers won't have to wait until May ...
Os Gemeos Photographed by Hieronymous
We're counting down the last 12 days of 2012 with Street Art photos chosen by BSA readers. Each one was nominated because it has special meaning to a reader or is simply a great photograph from 2012 t...
Images of the Week 01.29.12
The streets have been seeing an uptick in socio-political messages recently, whether because of the Occupy protests, or because artists are exercising their speech in low cost, low-tech, person-to-p...
BSA Images Of The Week: 11.01.20
Welcome to BSA Images of the Week. How was your blue moon, and your time switch, and your Beyloween? And your 6-3 Supreme Court? Feeling dizzy? Not much to worry about should be a slow we...
Black Holes Brooklyn Street Art High Line Jaime Rojo Manhattan NYC Phillips De Pury Gallery Ryan McGinness Steven P. Harrington