Yesterday BSA participated in the first annual PaperGirl NYC where  pieces of original art were handed out for free to incredulous recipients in Bushwick, Williamsburg, Greenpoint, The Lower East Side, Union Square, The Meat Packing District, The West End Highway, The Upper West Side, Central Park, The Upper East Side and Long Island City. 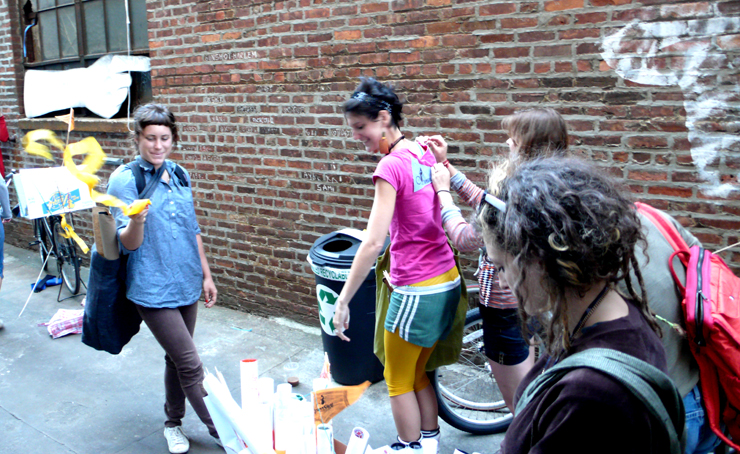 NewYorkers can be suspicious when it comes to free stuff on the street from strangers. Curious like cats, they love schwaaaaaag, and they’ll  grab shiny packaged free gum, energy drinks or diet nut bars from corporate vans and pickup trucks wrapped in splashy advertisements. Sometimes they’ll even wait, flirt and be nice to you to get a free sample of whatever food or drink it is that you are presenting to them.

But if you are pushing free original one of a kind pieces of free art – the responses can range from just flat out “no thank you”, to just “no” or a shake of their head. And that’s when they are being nice. In many cases they will just ignore you or give you nasty looks. Other times they’ll give you a hug and pose for pictures. You just never know. 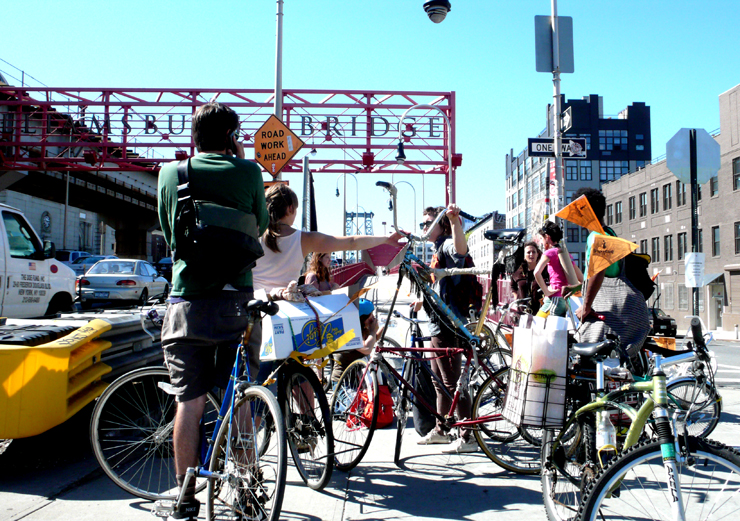 Manhattanites are a tough crowd indeed. The number of people that rejected the free art in Manhattan was very surprising to many of us. The crowds in Union Square Park, for example, had little interest in free art and the same pretty much goes for the rest of the island. Williamsburg, Bushwick, Greenpoint and Long Island City residents were far more receptive and nice to our overtures and when they heard “It’s free art” you would see their faces light up and take the art with a big smile. 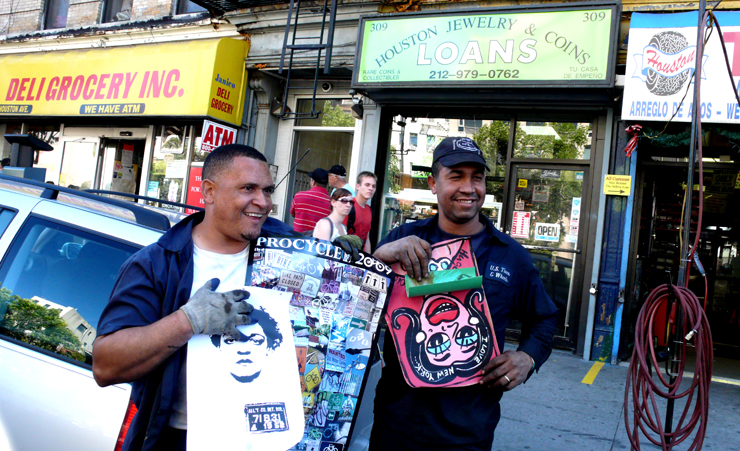 The people waiting in line to enter the studios TV show The Colbert Report were definitely not interested. When one standee timidly reached out to grab the art being handed to him on the sidewalk, a studio security guard promptly snatched the art from his hands and proceeded to lecture us about the dangers of handing down anything to them.

“These people, waiting in line, they belong to The Colbert Report,” he intoned with a straight face.

Of course when we challenged that ridiculous assertion of a public street somehow containing people who were enslaved and controlled by a television show, he became a bit more conciliatory. He explained that it was a matter of courtesy not to give free art to these people. The Colbert Report fans can’t enter the show with rolls of paper that might offend the host or gasp! the audiences back at home. Got it. 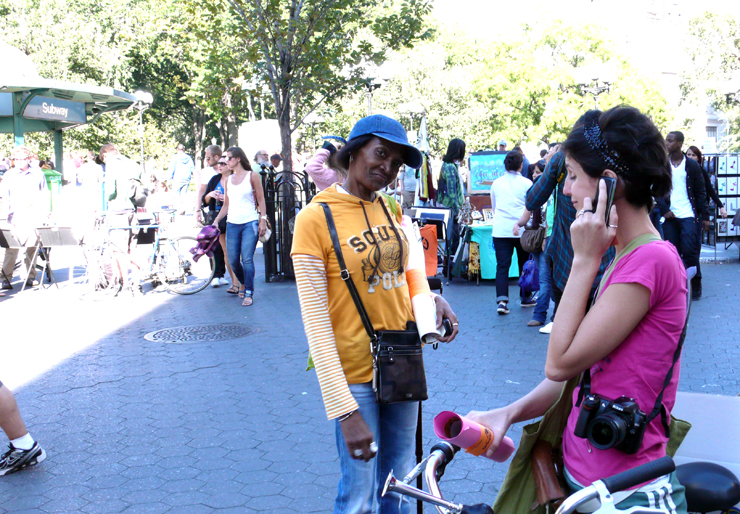 A pleased recipient with her rolled up piece. Photo © Jaime Rojo

PaperGirl NY is a collective of artists and art lovers that put out a call to artists to create art and to participate on this adventure. Artists from 12 countries responded and the art was shown briefly in New York City and in Albany before it was rolled up and given away. It was street art indeed. The concept is different from what you normally consider street art to be but the art was on the streets and this time some lucky people got to take it home. 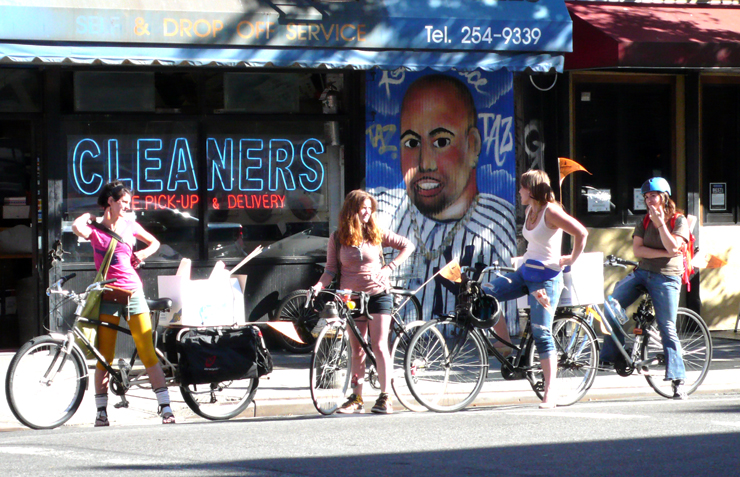 The notion that someone would reject free art, or anything free for that matter seemed alien. The enthusiasm and glee in which those that accepted the art were contagious and pure joy to watch. That made the day an unforgettable one… and the weather was perfect. 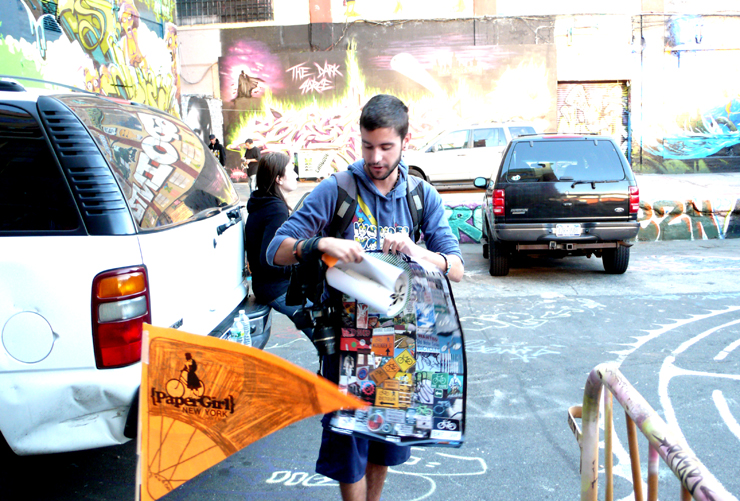 Yo, check it out. Free Art! Photo © Jaime Rojo 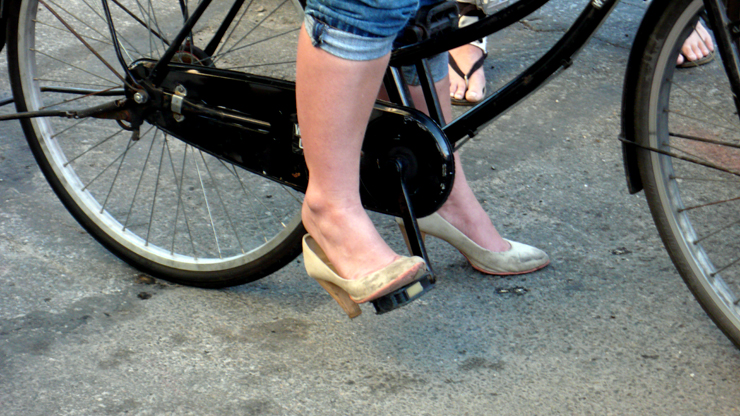 Heels on wheels. This PaperGirl pumped in these pumps all day throughout the city. (Photo © Jaime Rojo)

To learn more about PaperGir-NY please visit the site below:

∆∆ Sina B. Hickey ∆∆ ∆∆ PaperGirl-NYState ∆∆Founder and Lead Organizer
518.379.7642, PaperGirl.Albany@gmail.comBringing Art from the Gallery to the Street
www.PaperGirl-NY.comFacebook

The Thealang Collective: "El Cuco" Stealing Souls of Children, Notre Dame, & the Amazon / Dispatch ...
A new joint mural from LAPIZ and Elmar Karla as the newly formed "Thealang Collective". Both formerly living in Argentina, the two artists have distinctly different styles to combine here in a scene ...
Rammellzee, Racing For Thunder, and Interview with Carlo McCormick
Intergalactic Godhead and one of New York’s lost sons, the multidimensional Rammellzee is here, at least his pyramidic urn is. The train writer, performance artist, plastic artist, language master, ma...
NohJ Coley: Noise in Your Head
Storied Portraits In a Texan Music Warehouse Street Artist NohJColey travelled to Texas for a few weeks to visit friends and put up these new portraits in the studios of a de facto music factory. The...
Pine Tree Balls : A Public Art Recipe from Various & Gould
Overstuffed yourself with crackers and holiday cheeseballs? Why not try making some of these to burn off those extra calories? 3 Kings Day is in the bag and Christmas is a fading memory and we still ...
Cane Morto "TOYS" Exhibition in Milan
Man against man. Man against God. Man against himself. Man against gratuitously opinionated and parochial graff heads, Street Art fanboys, and self-appointed explainers of the “rules” of the street. ...
3rd Ward 59th Street Bridge Albany Brooklyn Brooklyn Street Art Bushwick Central Park Colber Report Greenpoint Jaime Rojo Long Island City Manhattan NYC PaperGirl-NY Pulaski Bridge Queens Sina B. Hickey Steven P. Harrington The Lower East Side The Meat Packing District The Upper East Side The Upper West Side The West End Highway Union Square Williamsburg Williamsburg Bridge