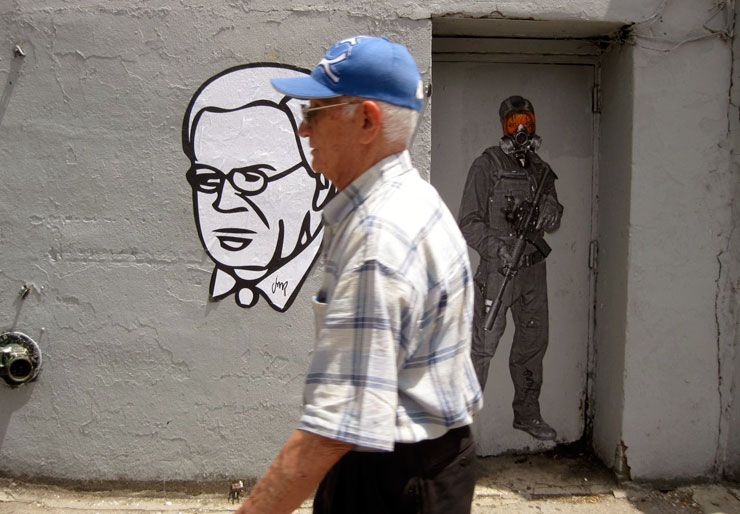 You’ve been seeing a new direction for Brooklyn Street Artist JMR recently. Instead of huge multi-colored abstracts that sometimes contain a portrait within, we have seen a number of smaller black and white wheat-paste portraits. We’d heard that JMR was a doing a new series about white men and their consternation. Understandably that seems like a timely topic. BSA wanted to ask JMR what’s driving this change in direction. 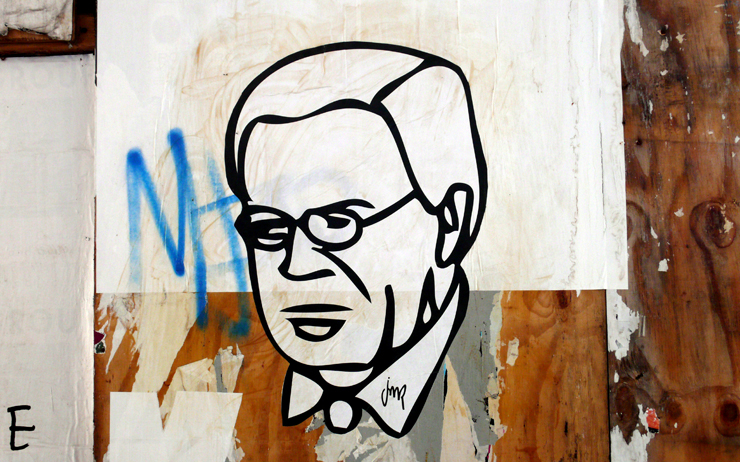 It took a little bit, but we found JMR. As it turns out, he’s abandoned NYC for the moment and is in a frigid underground vault in Texas, to hear him tell it.

“I am held prisoner to my air conditioning, as the sun burns all vegetation around me to a light umber. No one wanders aimlessly in this climate. It is as if the outside were contaminated by nuclear fallout and my neighbors are holed up in their backyard bunkers.” 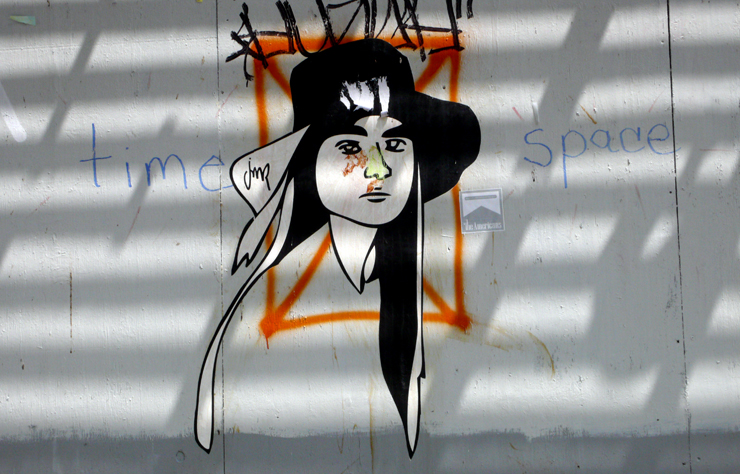 BSA: So what is going on with these white guys? And why has the human form become clarified and less abstract?
JMR: I haven’t written a cohesive description of what I am doing in ages, and have begun to wonder exactly what that is. Not what to write, but what I am doing. In the push to stay relevant as an artist, there is a fine line between putting your name out, and putting out something relevant.

In a nutshell, ultimately, and I use that word loosely, my goal is to express some sort of emotion in these portraits. I’ve spent much of my artistic career in the dark shadows of abstraction, but to put abstract work out to the general masses seems less affective. A black and white paste-up seems more relatable than an abstract one. Not that I am trying to get people to recognize the humanity around them, because I am not. I am trying to portray some humanity in my art. 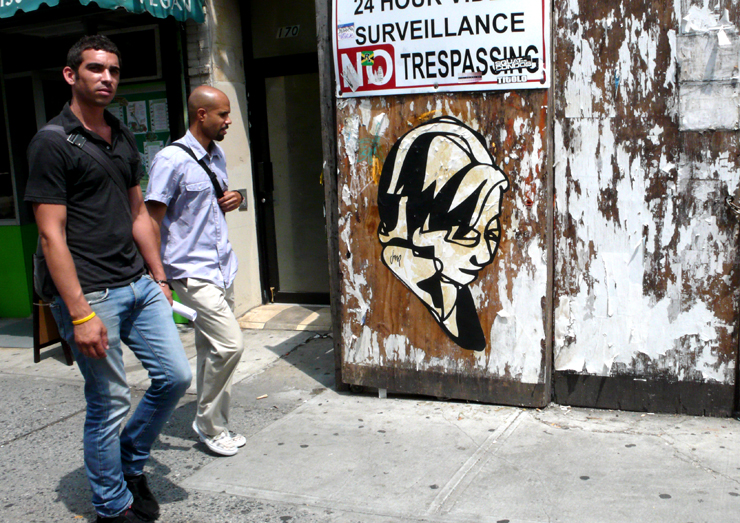 While that explanation was clear enough, you can’t say with certitude that this is where he’ll stay. It may in fact be a transition stage to where JMR is going. He gave a funny sort of series of observations that reveal a funny sort of self-reflective artist who may be at a turning point. He even gave this startlingly clear analogy that sounds a lot like the race for recognition among artists in a city full of artists, everyone following a source of light in hopes of sustenance or recognition.

“I take my daughter to feed these giant carp at the lake nearby and there are hundreds of them (carp, not lakes). When you throw whatever it is you’ve brought to feed them, they frenzy; thrusting their open mouths to the surface in hopes that something falls in. It’s violent. Some fish actually get pushed to the point where their whole bodies are out the water. I can’t help but equate that to all of us, regardless of craft or profession, and what we are aiming to do; Trying to stay at the top of the pile. Just to get those pieces of bread, cereal, stale pretzels, bagels, hotdog buns.” 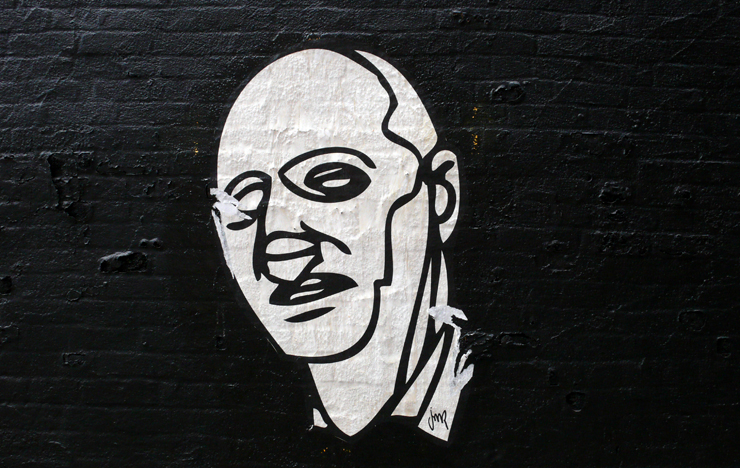 Take that for what you may. I’m taking it with an icy cold six-pack of PBR out on the lake. Have a nice Saturday everybody. 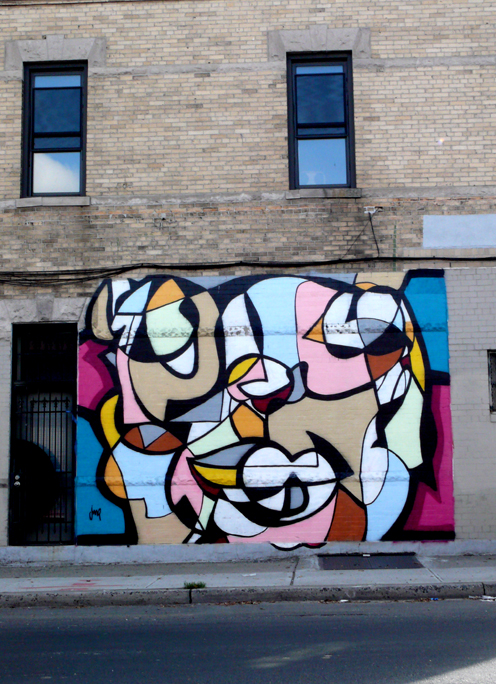 Jay Shells: The "Rap Quotes" Book
Context and placement are key to the success of Street Art. Jay Shells's project, "The Rap Quotes" more than meets those standards. Indeed his project might be one of the most relevant examples of st...
BSA Images Of The Week: 01.17.21
Here's our weekly interview with the streets, this week featuring Chupa, Elsie the Cowww, Gane, Gemma Gene, Kai, Li-Hill, Mr. Babby, Panic, Peachee Blue, Pork, Skewville, Sydney G. James, and Zex...
Toven in Baltimore: One Giant Leap for Poets
A recent sunny day brought Baltimore Street Artist Toven outside to install some new work, including his humorous mashup of American romantic writer Edgar Allan Poe and an astronaut. An avid reader, t...
Guerilla Spam and 108 Paint 2 Versions of the “Quarantana”
The Turin-based illustrator Guerrilla Spam has interpreted the “Quarantana” as a stylized toy extended from the arm of an elegant, almost Egyptian figure in a tall fez. Alessandria-born Street Artist...
Urban Nation Museum. Art Mile: Installations In Progress. Dispatch 5
Today some progress shots - these projects were not completed while we were shooting so you’ll want to go to the Museum Mile today along Bülowstraße (Berlin U-Bahn). The Urban Nation Art Mile (Artme...
Jaime Rojo Jim Rizzi JMR NYC Steven P. Harrington