MORE INFORMATION REGARDING THIS SHOW TO BE UPDATED 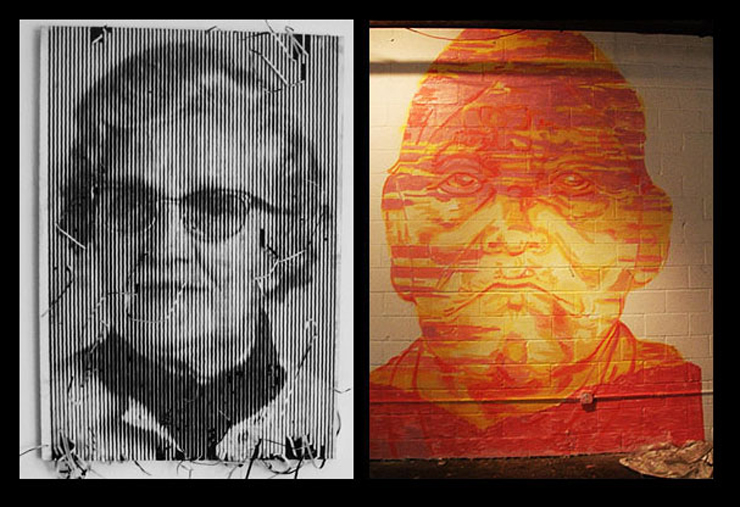 The world’s oldest known “Portrait” is believe to be created over 27,000 year ago. So why after all this time is it still the most often used subject of creation? A portrait often speaks much less about the physical features we are viewing, then it does about what’s behind the gaze in ones eyes or the telling angles of their mouth. This fascination continues to intrigue us through the work of three street artists who use traditional and non-traditional techniques to create their own brand of “PORTRAITS”.

Just because street art tandem, STEN & LEX are widely considered to be the pioneers of “stencil graffiti” in their Italian homeland, doesn’t necessarily mean they are content with resting on the title. Best known for introducing their “halftone stencil” technique, these two self-proclamined “Hole School” artists spend ample time hand-cutting pixel dots and lines to compose their imagery which is best viewed from a distance. Choosing to forgo the common pop culture imagery often associated with street art, STEN & LEX’s subject matter pulls no punches. Saints, Popes and the Italian Christian Church were primarily referenced early on –minus the often added social commentary. However, most recently and for their upcoming exhibition here, the subjects of choice comes from the historic Italian archives they’ve rescued. The 1960’s, 70’s and 80’s portraits from all walks of life are the focus this time around, as they are put through the rigorous transformation of stencil cutting style that is trademark STEN & LEX. The final appearance of these portraits appear to have been fed halfway through a paper shredder then pulled back at the last minute leaving the shreds left to dangle. The images are for the most part of common folk—young and old. People who have lived lives and have stories to tell. Just read their faces.
Seems as if the young, hard charging NYC street artist GAIA has been showcasing his bold imagery to the masses since before he could walk. Well maybe it hasn’t been quite that long but over the past few years he’s managed to garner a lot of attention by using more traditional techniques to create his wildlife animals and distinguishing human portraits. Taking a more intelligent, reflective approach to his work, this “old sole” uses wood block carvings and hand-drawn methods to achieve the fur textures of bears, tigers and rabbits as well as the worn lines in the faces of his latest portrait series entitled, “Legacy.” At it’s core, “Legacy” raises the question of infrastructure design and how we are forced to live with the decisions, good or bad, created by figures such as Robert Moses, James Wilson Rouse & Mies van der Rehoboth, all of whom have shaped parts of the American landscape. GAIA also plans on featuring a series of faded self portraits called “Sunsets”. Sunsets are a portrait of the nature of the street artist as an identity. It’s a pseudonym, to the person behind the work and the conflict between the secret, the collective and the fame of the individual. Some of the work is directly painted onto reclaimed street posters and found materials.

Gallery hours: Thursday – Saturday from 1pm – 7pm or by appointment.