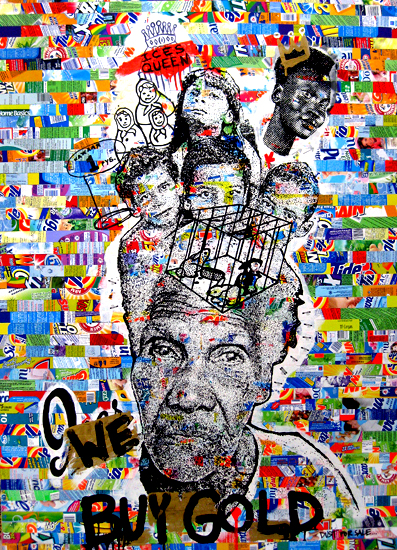 “UNCONVENTIONAL CONVICTION”
RAE
November 20 – December 18
OPENING RECEPTION: November 20, 6-9PM
. . . . . . . . . . . . . . . . . . . . . . . . .
Long before the emergence of Brooklynite Gallery, owner and curator Rae McGrath was constructing artwork of his own in many forms. Schooled in fine arts, raised immersed in the graffiti/breakdance culture of the 80’s and holding down a diverse range of blue collar jobs, has allowed RAE to create an eclectic range of visuals for an exhibition aptly titled “Unconventional Conviction”.
Over the years RAE has spent countless hours on the streets of New York City and other parts of the world, engaging then photographing the everyday person. Usually drawn to the elderly or youth— because of their experiences or lack thereof, RAE often finds similarities to his own life, connecting the dots through his grainy black and white photos which are then hand-painted or silk-screened into pieces that include block text and hand-drawn areas. The second part to RAE’s work involves the gathering and transformation of found objects— namely hundreds of brightly colored plastic laundry detergent bottles. Spending ample time in and around laundromat dumpsters throughout Brooklyn, RAE has amassed quite a collection of these bottles which he then dissects, using cutting techniques once learned while working as a deli worker and butcher. His tales are told on top of mosaic patterns full of vibrant colors and textual information.
For RAE, the vivid and hopeful Pop Art color schemes and graphic detail of the laundry bottles prove to be the perfect juxtaposition to his own urban Brooklyn upbringing and the countless cast of characters of his youthful working class existence. In the end, RAE uses these dynamic combinations to his advantage creating rich and strange alternate realities.

The Weird World of the Weird Crew in BK
Things are looking weird in Brooklyn at the moment thanks to Cone, Dxtr, Hrvb, Look, and Vidam. The Berlin based crew are in town for their show at Exit Room that opened last night and as soon as t...
BSA Film Friday: 10.26.18
Our weekly focus on the moving image and art in the streets. And other oddities. Now screening : 1. One Minute of Dance Per Day : Nadia Vadori-Gauthier 2. Nina Chanel Abney Talks About New Work...
"The Nashville Walls Project 2017" Brings Jason Woodside and Ian Ross
"The Nashville Walls Project," a privately funded business improvement initiative in the downtown district referred to as “The Gulch” has already brought Street Artists like Rone, Above, Herakut, Curi...
"ABOVE" in New York City
In dense cities like Hong Kong and Tokyo and New York there is so much activity that takes place above you, yet we primarily grant relevancy to what happens at street level from our pedestrian perspec...
Spider Tag Casts His Glowing Web Higher in Helsingborg
When Street Art passes into the realm of public art it takes on the character of permanence that will withstand time. While that may happen with the occasional graffiti burner or mural, more conventio...
Brooklkynite Gallery Brooklyn Brooklyn Street Art NYC Rae McGrath