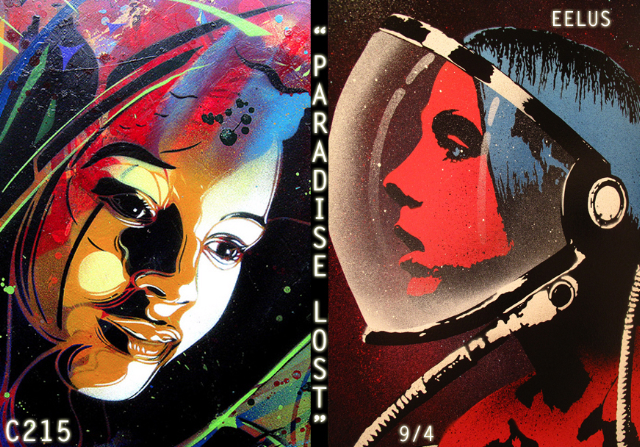 Image Courtesy of the Gallery

Never is there more an exciting time for a gallery and it’s curators than when they are in a position to be able to present work from artists who are on the cusp of breaking out and distancing themselves from the pack.  As we at Brooklynite Gallery proudly present, “Paradise Lost” a two-man exhibition by stencil-based artists C215 and Eelus —this is clearly the case. Loosely exploring themes of innocence, wonder and the imagination we experience as kids, both artists approach these themes from unique perspectives in both subject matter and stencil technique —clearly at the top of their games.

No other artist working in the public space today connects with the streets like C215. With striking murals in varying size and scope all over the globe, he not only paints pictures of everyday people and society’s “outcasts” —he connects with them.  Portraits of the elderly, middle-aged and children are carefully chosen; often reflecting the past, present and future in the gaze of their expressions.  At times his subjects gain your attention with grittiness and distress —and his stencils are cut that way; short, sharp and of the two-color variety.  Other times his subjects are radiant and fantastical —and again, his stencils are cut that way; graceful, curved and full movement.  Now, as C215 begins to evenly balance the time between doing ‘street work’ and having a gallery presence, we’re beginning to see this well-rounded artist can no longer be put into one single ‘category’.  Highly regarded by his peers as one of the top stencil artists working today, more than ever C215′s work exudes confidence.  Continually transforming and perfecting his stencil techniques, experimenting with various surfaces and color theories, C215 doesn’t have to speak a word about the range of emotions he channels through his work…   We can easily see and feel it for ourselves.

On the heels of his high impact solo exhibition in London last February, UK artist Eelus has officially arrived on the scene with an unusual set of tricks up his sleeve.  Toying with the future expectations of adolescence, while juxtaposing sci-fi, sexual tension and poignant text, his imagery is reminiscent of a bizarre dream you wake up from and struggle to find it’s meaning.  Eelus’ work often feels like a still frame from a complex film that points us in the right direction, yet still manages to give us only enough information to draw our own conclusions.   Depending on which strings he wants to tug, his often three-color palette is used to strike just the right emotion when applied to surfaces ranging from canvas and wood to vintage metal signage.  It all seems to be coming together as Eelus‘ work continues to stir conversation amongst his early fans as well new ones, both of whom anticipate his next print release and debate on which image it should contain.

Join us at Brooklynite during the un-official, last weekend of summer for an Opening Night Party and new work from both C215 and Eelus, including outside murals that is sure leave viewers wanting more.  For further information or photos, kindly contact Hope McGrath at pr@brooklynitegallery.com.