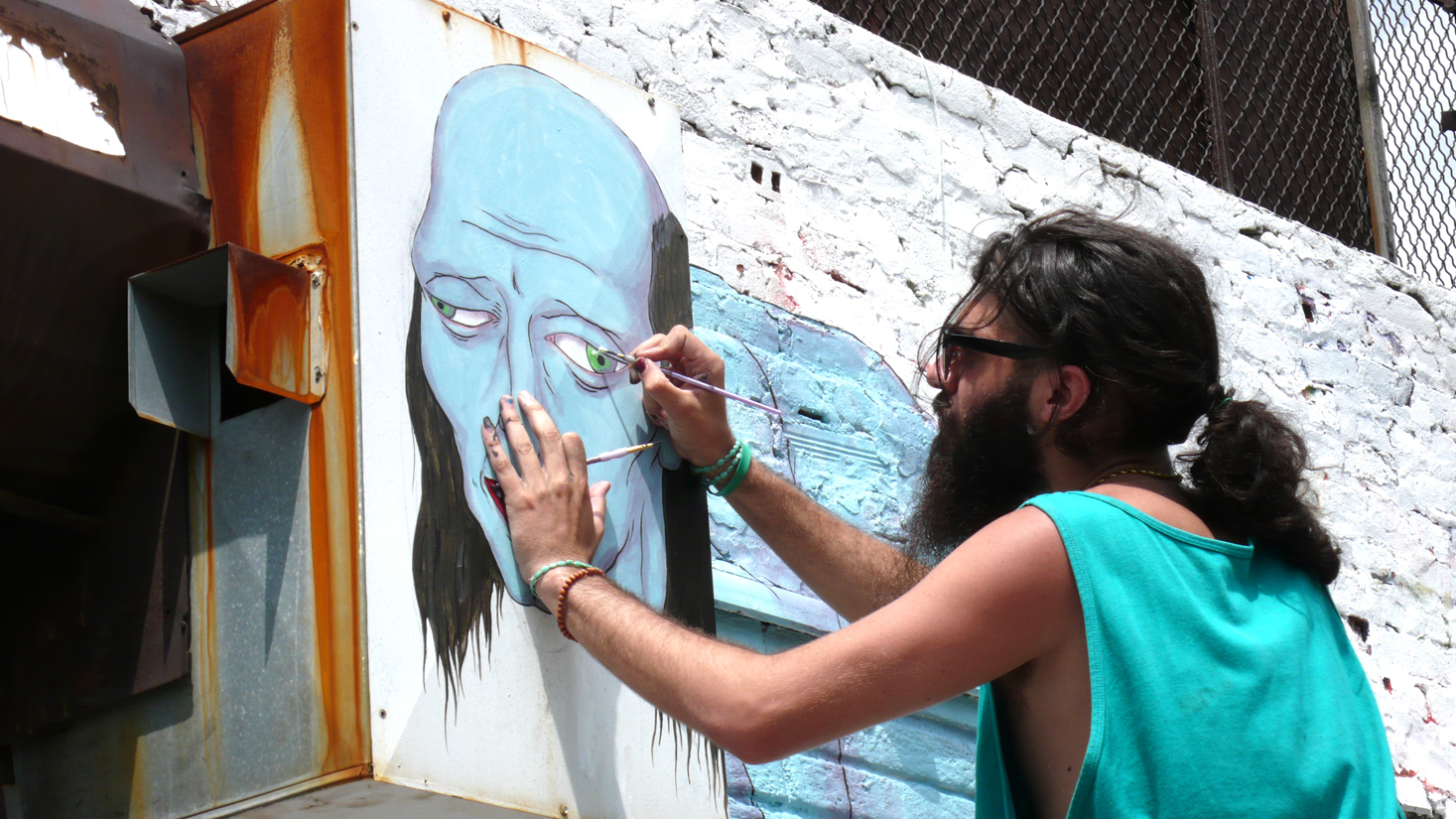 Having recently lost a testicle, Don Pablo Pedro sure has balls.

He might tell you that himself, or you could just go to his first solo show at English Kills Gallery in Bushwick that closes tomorrow.  They’ll be having a “Closing Barbecue” and gallery owner Chris Harding advises you to bring your own meat. Whether to eat it before of after viewing the “One-Ball Show” is a very good question.

Speaking of barbecues, it’s a good thing the mighty Church of England or the Vatican don’t chase down artists for heresy or blasphemy anymore, because our poor young Pablo would be roasting over an open pit right about now. Witness the scroll canvasses with gaping vaginas in the middle of bellies and foreheads, a four-armed chanteuse sucking her own turgid finger, a man giving birth to a screaming baby out of his rectum, and gender bending not seen since the bathroom at Don Hill’s.  Simultaneously riveting and repulsing, after seeing this bevy of multi-colored psycho-sexual torment, I felt guilty and sickened and a little bit turned on.

His name is Don Pablo. And he is a warm person who speaks freely, if mischievously, and if there is torment, you wouldn’t know it. With long hair, bushy beard, nail polish, and a knockout fashion designer girlfriend, Don Pablo looks part Jesus of Nazareth, part Devendra Banhart.

She was quite a dish (Don Pablo Pedro) (photo Steven P. Harrington)

And now he’s done a big blue multi-breasted piece on a wall – so that is pretty much all it takes to get on this blog.  As a painter, the dude’s no slouch either – taking it slowly and methodically with careful rendering and attention to detail.  On a sunny afternoon last week we finally saw the gallery show (Opened Aug. 1), and saw DPP in action.

Sometimes it’s hard to get a head in this city (photo Steven P. Harrington)

And you complain about YOUR family (photo Steven P. Harrington)

Brooklyn Street Art: So, for how long have you been painting?

Don Pablo Pedro: My father handed me a brush as soon as I came out of my mothers vagina.

Brooklyn Street Art: Your gallery show features creatures that are very human, yet have multiple variations of genitalia, as well as clever locations for them.

Don Pablo Pedro: Yes they do.

Brooklyn Street Art: You recently had a very serious medical crisis. How did that affect you personally and how has it affected your work?

Don Pablo Pedro: I’m lighter now only having one testicle and faster and more efficient.

Don Pablo Pedro: Very easy that’s why I love them.

Brooklyn Street Art: Have you ventured out of the studio to do much street art?

Don Pablo Pedro: Not much lately but maybe more soon.

Brooklyn Street Art: Whose this blue friend on the wall?

Panmela Castro, Olympic Goddess in Rio for the Games
From Rio, “The Goddess of Victory” by Brazilian artist Panmela Castro on the Boulevard Olímpico. Fresh off her PM/10 mural in front of the under construction Urban Nation in Berlin, Panmela says that ...
BSA Film Friday: 06.22.18
1. Rammellzee: It's Not Who But What 2. JANZ Artist in Time - Joanna Kiernan - Trailer 3. Frida Kahlo at V&A on FWTV 4. Sonner's Sonnet by Resoborg
BSA Film Friday: 05.31.19
Our weekly focus on the moving image and art in the streets. And other oddities. Now screening : 1. ENCHENTE (FLOOD) Eduardo Srur and Tché Ruggi2. “LA PARED ES NUESTRA” por ESCIF (spanish)3. ...
Swoon - A Peak Inside "The Archivist's Circle"
Old, rare, nearly lost pieces of Swoon are rotating through her new The Archivist’s Circle online, along with small editions of recreated pieces like the first sticker designs, wallpapers, paper cuts,...
2010-2020 : 10 Impactful Street Art & Graffiti Interventions & Events of the Decade
BSA has been here with you for this entire decade - an honor and a privilege. Reviewing the many interventions and events we witnessed and shared with our readers, we realize that this grassroots peo...