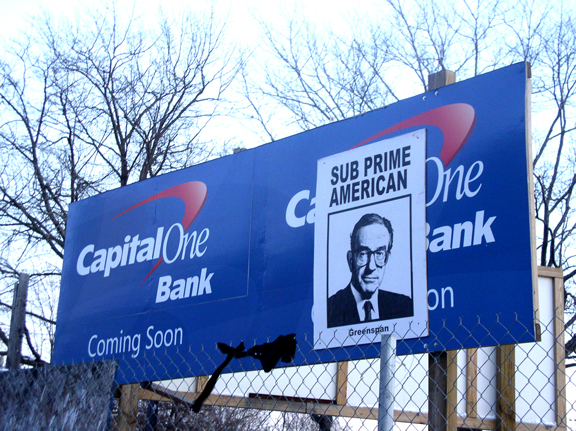 We’ve been a little busy on that “Street Crush” KRAZEE-ness for a few weeks,

so we thought everyone should just take it easy, and not put up any work on the street until we could get back out there and take a look around. Well, that didn’t really work very well, did it? What the heck?

Remember your patriotism being questioned at every corner a couple years ago? Specter would like to continue the conversation apparently. (photo Jaime Rojo)

Don't know where Zoso is going with this, but Shin Shin is surrounding it with spring flowers (photo Jaime Rojo)

Oh, you are like, such a square. I mean, like you are so square you are like a cube, or whatever. (Aakash Nihilahni) (photo Jaime Rojo)

This was on a floor, which means it is probably destroyed by now. (Aakash Nihilahni) (photo Jaime Rojo)

Someone needs a bib (Robots Will Kill) (photo Chris)

All tied up (Chris from Robots Will Kill) (photo Jaime Rojo)

Like my new Stoll? Filene's Basement of course! I know, PETA would probably have a fit, but it was 40% off. (Art Goons, C215) (photo Jaime Rojo)

Siiiiinnngggiin in the Rain, Just Singing -- In the Rain!! (Haculla) (photo Jaime Rojo)

I used to live in this apartment on the upper east side near Gracie Mansion, and sometimes at night a golf-ball sized cockroach would run across my bed and thump onto the hardwood floor and run away. I kid you not. (Hellbent) (photo Jaime Rojo)

Deeks and Stikman on a corroded wall (photo Jaime Rojo)

BSA Images Of The Week: 11.09.14
It's a free-for-all bag of mushrooms this week - or psychedelic toads to lick, in the case of Don't Fret, who starts us off with a 2014 NYC tourist dressed head to toe in an Ebola suit. Naturally,...
GAIA and Fereshta Ludin - "Persons of Interest"
BSA is in Berlin this month to present a new show of 12 important Brooklyn Street Artists at the Urban Nation haus as part of Project M/7. PERSONS OF INTEREST brings to our sister city a diverse c...
BSA Images Of The Week: 11.01.15
A stunning panoply of events all at once this Halloween weekend in New York - The Mets are in the "World Series" playing here and everybody is a fan, the New York City Marathon is today (oldest pa...
Images of the Week 02.21.10
Our weekly Interview with the street, this week featuring : WK Interact, Dwyane Wade, Miami Heat, Bishop203, Bangel, Celso, Sweat Shop, Stikman, Tazmat Rednose, Primo da Clown, Invader, Pink Eye, Jaim...
Geometricks Opens - Shots of the Gallery
Here are shots of the new GEOMETRICKS show as installed and opening this evening in Red Hook, Brooklyn at Gallery Brooklyn. These images look so austere and crisp, unlike the wildness on the canvasses...
Aakash Nihalani Bishop 203 Blanco C215 Chris from Robots Will Kill Deeker Ellis Gallagher A.K.A. (C)ELLIS G. Gaia General Howe Haculla Hellbent Imminent Disaster Keely MBW Momo Shin Shin Specter Stikman The Dude Company UFO Veng from Robots Will Kill Zoso