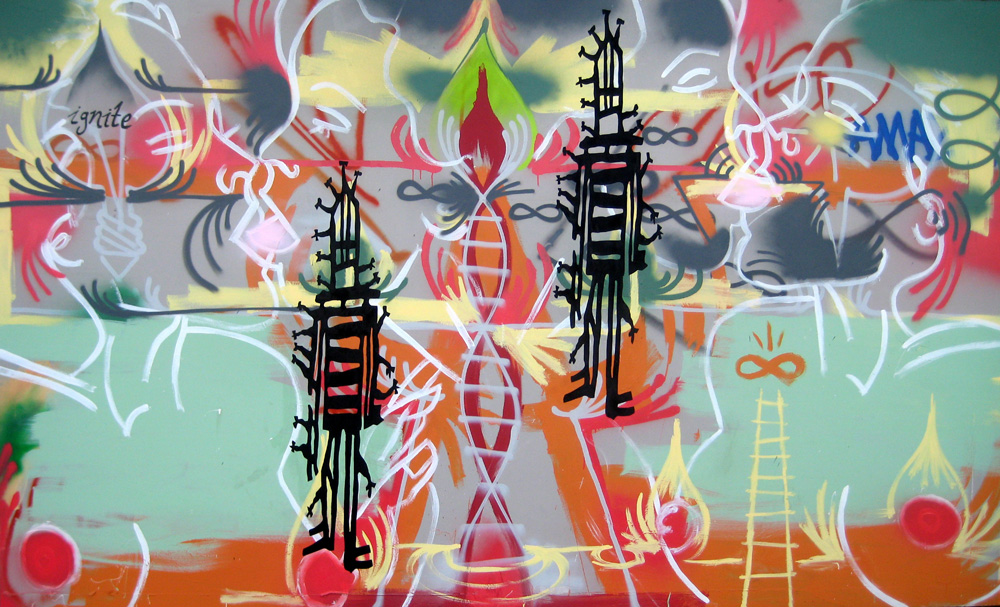 Staring through the window of Factory Fresh (photo Celso)

Brooklyn street artist Infinity talks about his new show with Celso and friends, symbolism, and how we are all “big bang breath”

Part of the appeal of street art is the act of discovery. Even though urban planners may love to tell you that the chaotic grid of broken streets in New York’s largest borough have logic, I’m always getting lost. It’s a giant maze of wonderment and frustration.

And don’t tell me that GPS is going to solve that problem…. BTW, Don’t you love your newly techno-nuttified corner taxi service guy now that he’s got one of those $79 electronic global positioning map rectangles perched atop his dashboard? – you climb in the back seat and suddenly he’s going 115 miles an hour down side streets with his eyes sucked into that little screen like it’s real live PSP crack, blithely running over dogs and small children in real time!

Right, so this artists’ life — it’s about discovery, a veritable MAZE of possibilities around every corner in Brooklyn neighborhoods; Art, advertisements, billboards, street signs – everybody is always communicating. Maybe you are going to find a new Swoon smacked up under the highway, or maybe you’ll find a cat smashed on the pavement. Or maybe you’ll see that new HELLBENT angel with arrows sticking in her torso. And it’s right next to a Judith Supine way up on the side of a factory. How do they get up there anyway?

Keep your eyes peeled, the messages on the street seem infinite. Just ask Infinity! He is co-curating a maze of his own with Celso, opening this weekend at Factory Fresh. Infinity says the maze reflects his own interpretation of the streets, “For me the maze is like our urban cityscape, a semiotic landscape of signs and symbols, messages to buy, expressions of human spirit, traffic regulations, political persuasions, etcetera”.

Celso calls their new installation, “a multidimensional environment designed to overwhelm the senses”. Together these two ELC alumni have completely been pushing themselves and each other to make a great show of it – and they’ve brought along 3 friends to add to the mix; the newly morphing Stikman, the New York multi-storied old-schooler LAII, and relative newcomer Cbeauty.

Collaboration is the key for Infinity, Celso, and the Stikman (photo Celso)

Infinity took a moment to talk with us about his approach to the creative spirit and the upcoming show;
Brooklyn Street Art: How did you come up with the idea of A MAZE?

Infinity: I don’t know exactly where Celso got his initial inspiration, but I was immediately into it when we started throwing ideas around in the spray room in our studios. We’ve totally crushed the walls in there so we are surrounded by two-stories of art by our friends and us. Basically we work in a maze of art. Osmosis in the petri dish.

Celso and I painted the majority of the walls, which are 6×10 feet, but Stikman, LA2, and Cbeauty worked on a few too. We are showing all kinds of smaller pieces, art objects and books too. Stikman has a customized-condom dispenser, and I’ll be showing my passion poster series. The backyard will have some sculptural stuff and also a new mural. LA2 will be hooking up a DJ and possibly break dancers.

Brooklyn Street Art: How does the MAZE reflect the urban cityscape and your experience on the street?
Infinity: I find it interesting that the painted maze ends up being like a diorama of a city, creating a simile, like an urban semiotic landscape. The city is a maze of signs and symbols, messages, coercion, personal expressions, traffic regulations, political persuasions, buy-sell-buy-sell, etc. Everything is crafted to tell us something by someone, and it’s all mediated, and the medium is the mess! It’s all mediated by the exchange of money and private property, whether it’s an advertiser, your clothes, your privacy, the government, or the ruling class making everything monolithic and orderly so they/we can feel safe, in control and keep us/them in line. I have no friends living in Manhattan any longer. Broken window theory? Human spirit before real estate! It’s the paradox of safety versus control.

But, for me, I think our painted maze-scape is a celebration, a burst of the human spirit, an amazing month of collaboration, improvisation, and experimentation. Although Manhattan might eventually be one sterile monolithic symbol of power, of real estate over people, so every time someone makes art, has a show, or puts something out, I enjoy it as some kind of communication, a rallying yelp, an aesthetic action, a statement in favor of the individual, the mutating aspiring tumescent resonant human spirit. We are big bang breath and we are mutating our culture, and eventually our biology, our cells, our dna. Rewrite the human genome!!!

Brooklyn Street Art: Is it true you guys did some dumpster-diving to create this show?
Infinity:We were going to build the walls but luckily fate intervened. El Mighty Celso just happened to notice eight union-built, theatre set walls in the garbage in Manhattan. He immediately rented a truck and brought them to the studio. My hero. Such great quality and totally free. A cool connection to and energy from the City. Then we spent a month just painting ‘em back and forth, over and over. It was one of the most fun months ever in my life.

Brooklyn Street Art: Infinity, your work is full of symbols, like scientific notations, maybe they are little DNA strands… And in collaborative pieces you like to mix your DNA symbols freely. Are you trying to fool around with the gene pool?
Infinity:A resonant symbol can change everything from the mind to the heart to the cells. I am working on a Grand Semiotic Unification Theory to tie together all the different sign systems from different disciplines, such as chemistry, algebra, the alphabet, and create grammatically mutating equations of unity, aspiration, and infiltration. This should allow for a cohesion and amplification of resonance of the resulting talismans, the recombinant charms, so that this resulting lexicon would be the equivalent of a witch’s spell book, and we could simply twitch our noses, and advance humanity.

Putting stuff on the street imbues it with a statement based in personal risk, masked-avenger mystery and anti-status-quo symbolism. It can be a direct personal connection, an unmediated communication from artist to viewer, amplifying the resonance, and multiplying transmissions.

So the ugly duckling, the errant lunatic, the artistic psychotic, the political activist, the disenfranchised, the visionary evangelist, etc. can take matters into there own hands, hit the streets, and spread the word, the seeds, their respelled genome. This allows for that one lone mutant prestidigitator to cut through the system and mutate our cultural DNA, giving it a chance to change the world. 88+)

Brooklyn Street Art: Can you talk a little bit about the other artists in the show? Is Stikman kind of skinny and robotic?
Infinity: I dont know… He uses a cloaking device most of the time …

Brooklyn Street Art: Where did LA2 come from?
Infinity: He is an old-school graffiti artist from the Lower East Side in Manhattan. He grew up there in the Seventies where he met Keith Haring and became a constant collaborator. His work still resonates with that energy and practically shakes itself off the wall with its visual vibrations.

Brooklyn Street Art: Is this the first show for Cbeauty?
Infinity: Yes. She does beautiful stencils, drawings and wheat pastes. Like Stikman, she is a phantom, only revealing herself through her aesthetic apparitions.

Brooklyn Street Art: You suffered some serious back problems this year, which really limited your ability to move around much. How did that affect your creative life?
Infinity: I was laid up with a pinched nerve for three months, confined pretty much to a matt on the floor, crawling to physical therapy three times a week. I became totally stir crazy and depressed, but at least a few interesting paintings, and a new compositional strategy, came out of it. One time, when I was panicking about getting supplies for the work for this show, I just took the panels off of the cabinets in the kitchen and bathroom and did some very intense ink-and-scratch paintings on them. They have some weird energy now, covered with a kind of agoraphobic, toxic spew, like fumes from all the chemicals and poisonous products mixing and mutating underneath your sink, your skin, your cells.

Brooklyn Street Art: Is Celso kind of Bossy?
Infinity: Huh? No. But very interesting and revealing question. I’m betting that there is someone else out there who could answer it cattier than I.

Show Me the Munny! (photo Celso)

Brooklyn Street Art: You have a little book in the show called APPENDIX: ANTHEM. Is it self-published?
Infinity: Yes. I like to make personal little books, especially mini-comics and chapbooks, which are xeroxed, but also have a personal touch involved. Falls somewhere between book arts and artist’s books.

Brooklyn Street Art: Can you talk about what’s inside the book?
Infinity: First, I used orange spray paint in specified spots on graph paper. Then I xeroxed a handwritten pencil manuscript onto the pages. Lastly, it was saddle-stapled with a black cover. Its called APPENDIX: ANTHEM because its sort of a poetic lexicon that attempts to define some of the words and symbols that I use as motifs in my work. It’s also about the aspirational nature of the human spirit as expressed through street art, the community it creates, and its affect on mainstream culture. But mainly it’s a celebration of all the great people that I have in my life now since first sending a street signal. Thank you!!!

Brooklyn Street Art: Are you working on ideas for your next show?
Infinity: There are a couple cool ELC + friends shows in the works for next year which I am really excited about. Abe Lincoln Jr,! Royce Bannon! Anera! Kickin’ ass! Then in January there is the AdHoc/ThinkSpace group show in Los Angeles which we are all in too. I also am working on a game composition or the visual arts called TRIDENT. It’s a creation strategy for a quartet of painters based on cue cards, dice and a timer. The cards are a comprehensive system categorizing all aspects of the creative process. This system creates an authority-and-ego-free environment of inspiration and collaboration. I hope to finish the piece soon and start rehearsals, but who knows because I’ve been sayin that for two years now! I also have a solo game piece that I hope to perform which I haven’t done since 2006.

The exhibition opens Friday November 14 at Factory Fresh Gallery and in addition to tackling the whole space, check out the special performances in the back yard.

Opening Reception: Friday, November 14, 6-10pm
November 14 – December 2, 2008
New York City street artists Celso & infinity present A Maze, an exhibition and installation of work based on networks and passages. A gallery-sized, 7-foot-tall maze, constructed entirely out of original art, will immerse participants in a multidimensional environment designed to overwhelm the senses.

The work invites viewers to choose their path to a destination that, ultimately, is unknown. Random decisions have to be made at each artistic obstruction: Continue right or left? Go back and chose another route? The end result could offer great reward. Likewise, it could be a dead end. You choose.

A Maze is a site specific installation made for Factory Fresh that is curated and conceived by Celso and infinity in an attempt to better understand the challenges presented by working in an ever changing artistic landscape.