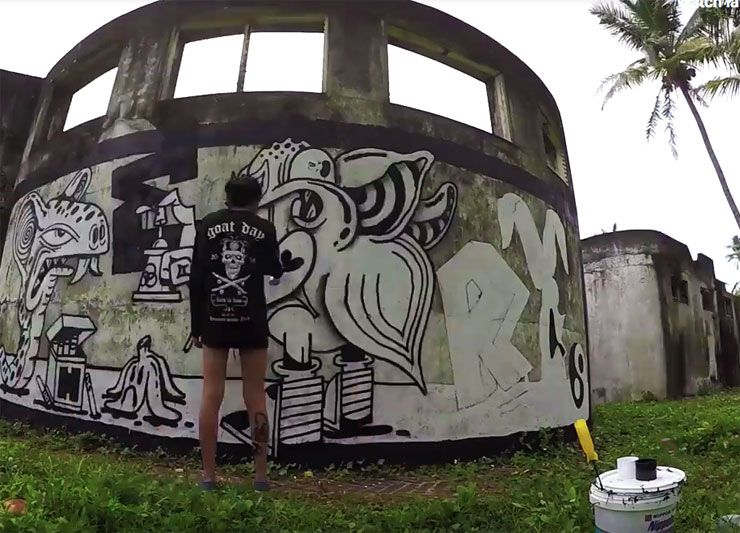 Now screening :
1. The Yok & Sheryo in Sri Lanka
2. “Perpetual Flow” by Jorge Gerada in Morocco
3. Etnik in Barcelona with Contorno Urbano Foundation
4. Haroshi at his studio in Tokyo

Always a feeling of non-linear tropical adventure awaiting when you pop open a new spraycation video from the Street Art duo Yok & Sheryo, who would be just as happy to learn a local craft in your town as to paint a wall. Here they are painting and riding tuk tuks and running with a pack of wild dogs, as you do.

Land artist Jorge Gerada mounts a large project in Ouarzazate, Morocco that extends over 37,500 meters in this commissioned job for a coffee brand calendar. Using rakes, stones, dark gravel, and vegetable oil, a scene of two hands under running water is created.

“Born in Stockholm and living in Torino, Etnik feels right at home on the street of many cities and the dense, designed, deliberate defining of the man-made environment,” we write in yesterdays posting on BSA. “What is new here is the inclusion of a leaf motif, imperfectly biomorphic, a visual paean to the natural world that precedes us and will outlast every cityscape we devise.”

Haroshi at his studio in Tokyo

“Calling Haroshi a sculptor seems too simple, because he is a collector, architect, painter and industrial designer, as well,” says Evan Pricco in the intro and interview he does on Juxtapoz with the Tokyo based artist. “What he has done throughout his career is take recycled skateboard decks, transforming and crafting them into sculptures that range from classic graphics, pop iconography, installations, and the present, where he currently recreates Japanese toys, including those from childhood.” See the new video by Chop Em Down and read the full piece here.

Never Crew Brings the Bear in Satka, Russia
Never Crew is in the Ural Mountains in Satka, Russia with a message about man’s disconnection with nature. Their murals often contain one large animal, and this time a bear takes center stage – rather...
Avant Garde Tudela 2020. Part I - Mina Hamada
Japan’s Mina Hamada has just completed her mural for the 2020 edition of Avant Garde Tudela in Spain. Curated by artist Jorge Rodríguez-Gerada and organized by Tudela-Cultura, the northern Spanish ci...
BSA Film Friday: 05.08.20 / Dispatch From Isolation # 47
Our weekly focus on the moving image and art in the streets. And other oddities. Now screening : 1. Kraftwerk: Pop Art, Remembering Florian Schneider BSA Special Feature: Kraftwerk: Po...
Clubhouse Chemistry in a Warehouse : BSA x UN BERLIN ART BASEL 2016: Dispatch 4
One of the fantastic parts of Miami’s Art Basel / Wynwood craziness, aside from the colorful drinks and hair sculptures and accidental tripping over almost every Street Artist you have heard of (and...
Searching For Stikman: An Interview With The Elusive Artist
Startling Revelations With Him in the Back Yard Stikman (photo © Jaime Rojo) When the D.I.Y. movement met graffiti in the early 2000s in cities like New York, LA, Paris, Berlin, and London, it als...
Barcelona Brooklyn Street Art BSA Film Friday Contorno Urbano Etnik Haroshi Jaime Rojo Jorge Rodriguez Gerarda Sheryo Steven P. Harrington The Yok