Optically entertaining Street Artists Dalek and Buff Monster don’t typically work together and are known for uniquely different approaches although their new “Spaced Out” double-solo show at GR Gallery in NYC gives a new example of how artists can work together and compliment one another, if not integrate entirely.

In this show of original artworks, wall paintings, editions, and installations, the two find a common language of color while bringing their individual take on character to the party. With Dalek’s Space Monkey making a few appearances and Buff’s melty family popping up throughout this blended linear splatter of optic cosmos, the two personalities come together for the session in a welcoming and satisfying way. 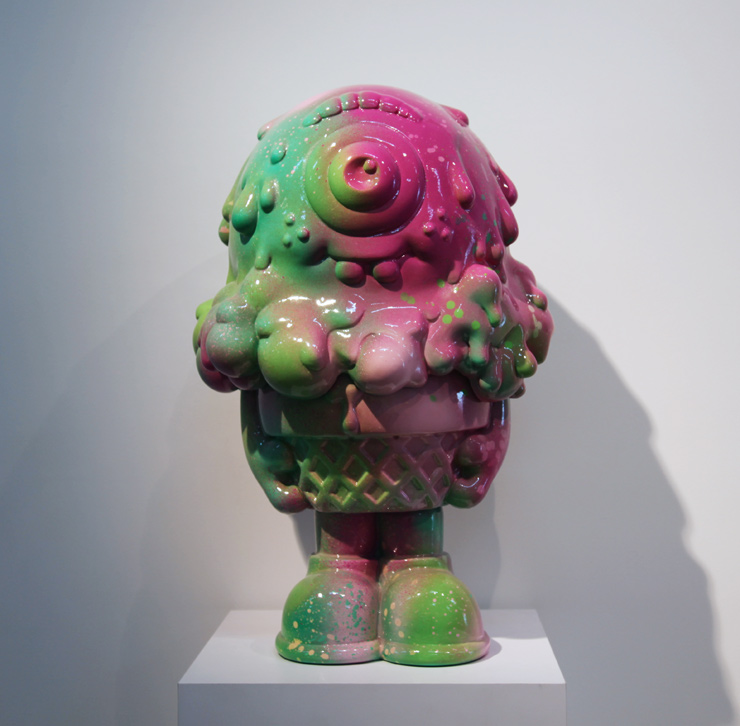 We asked both artists about the show and how they worked together to find a common route in outer space.

BSA: Can you tell us a little about the process of creating work for this dual show with Buff Monster. Was there an effort to find a common aesthetic or approach?

Dalek: I’ve known Buff for years but we’ve really never crossed paths in shows or projects. So when GR started talking to me about this show they mentioned doing it with Buff and my first reaction was “that could be super fun”. I think there is a natural commonality to our work on a certain level so i knew it’d flow well regardless. We didn’t plan much; I’m a horrible planner with shows so i went into it just figuring I’d make it colorful and fun and get done what I could. Once I got in the space with him we definitely got rolling and although there wasn’t any particular attempt to gel everything we were definitely feeding off each others’ energy when getting in the work zone and the show felt really cohesive to me at the end. 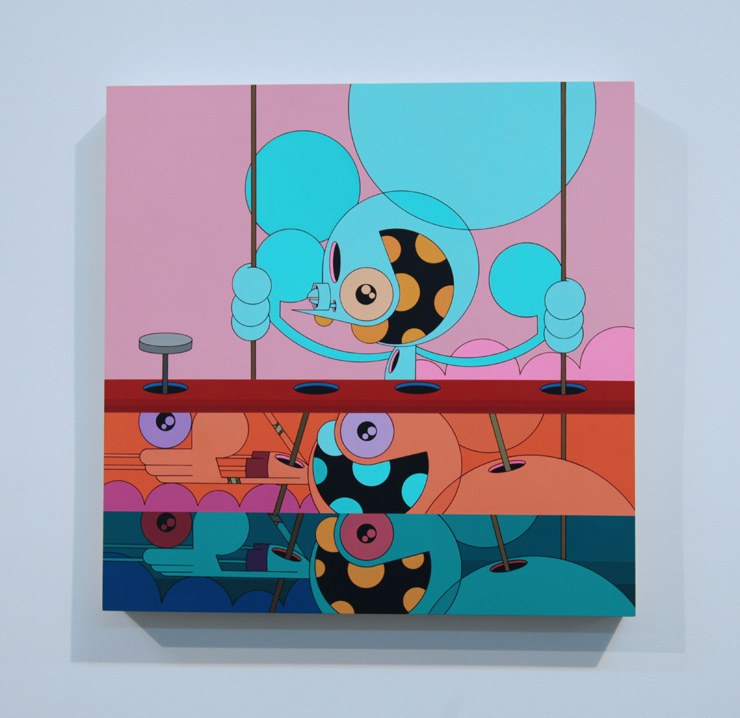 BSA: Your alter ego the Space Monkey often is swimming through pattern and color and contemplating the rate and velocity of technological change. Is he changed or affected by this dual effort in these new compositions? What’s he thinking about?

Dalek: Space Monkey is definitely contemplating a lot – although not fully aware of what contemplation is. I’d say its more effected by my own growth and change through the years than this specific situation. But he certainly felt right at home amongst the goings on and happenings. Mostly Space Monkey is considering how to escape the confines of its 2 dimensional world. The walls are closing in and the struggle intensifies to break free of the ever shrinking constrictive planes. 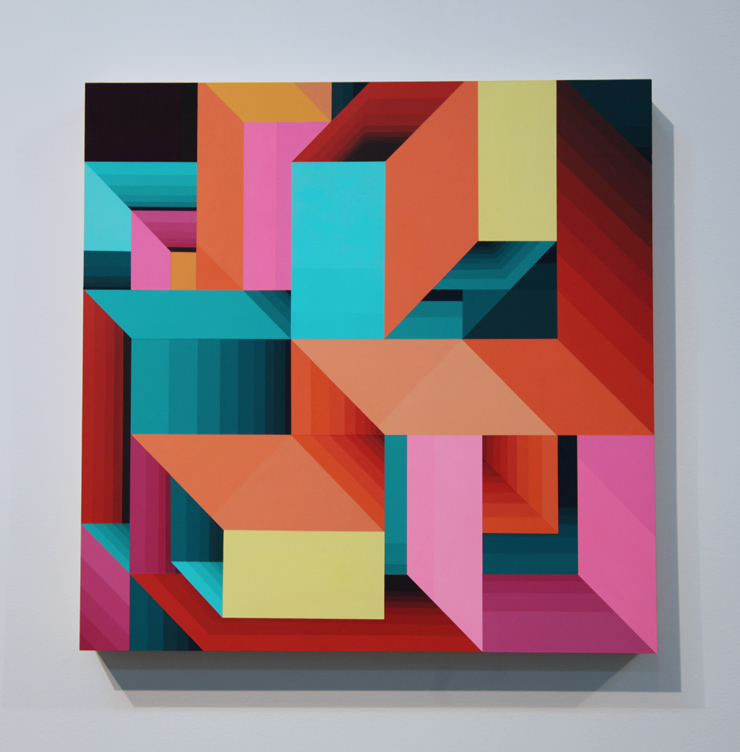 BSA: When you are creating and experiencing the geometric orchestrations that you manifest, do the optics sometimes vibrate or move before your eyes? Do you ever hear or feel a rhythm when gazing upon them?

Dalek: There is definitely a Kandinsky-like approach in it for sure. Compositions are never planned out – they just go where they naturally feel the need to move. So I listen and engage and react accordingly. There is a rhythm and a flow that moves from beginning to end, sometimes switching tempo or intensity. The colors will vibrate for sure – gets my eyes all crazy and that is probably why I gotta wear glasses these days. 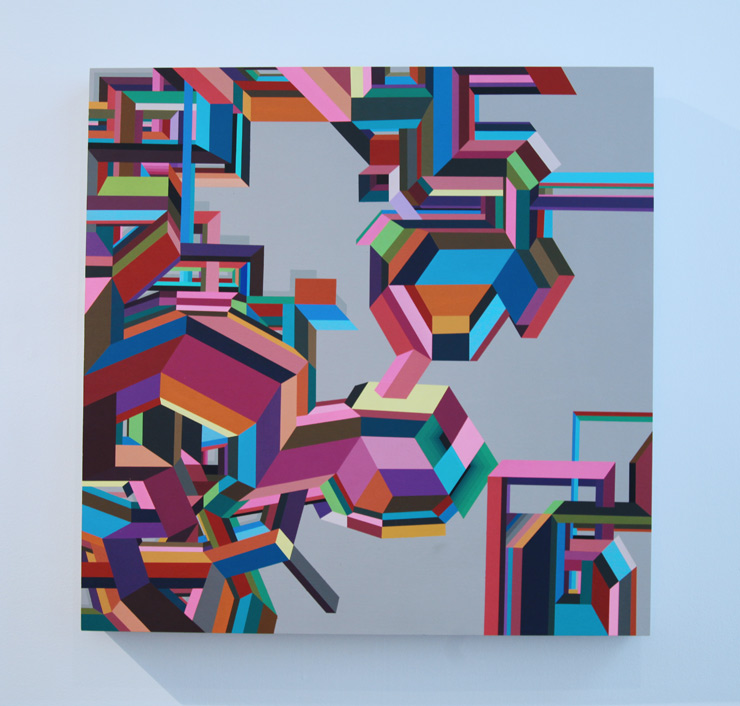 BSA: Buff Monster, you are working with a new color palette than your fans have seen very much in the past. What inspired you to venture into this selection of colors.

Buff Monster: I think the unique (limited) traditional Buff Monster color palette is great, but I really wanted these new paintings to have a different feel. Half the pieces in the show are very experimental for me and one of the limitations I gave myself was no black (and similarly, no gray either). When I launched the Stay Melty brand last year, I settled on a new color palette: teal, yellow and of course pink. I guess even though I live in NYC, I’ve really been into exploring a much more tropical and optimistic color palette. I even used the flattest varnish I could find (as opposed to the very glossy varnish I normally use) so that the pieces feel extra soft. 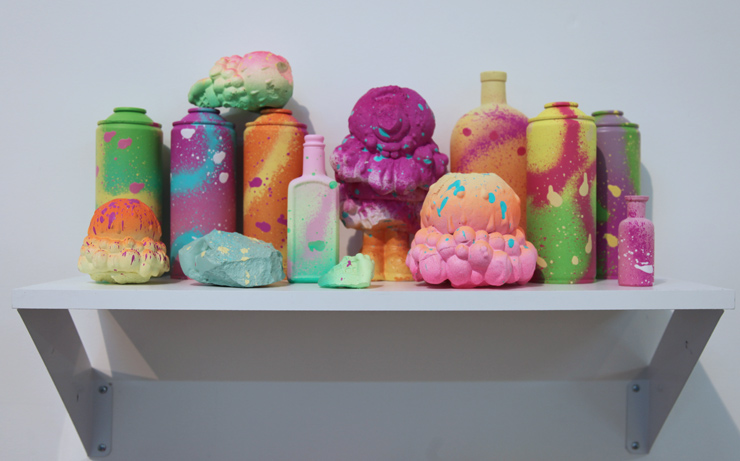 BSA: We also notice that there is a digitized aspect to some of your reappearing images – does this aesthetic draw on early computer graphics, video games, or something similar?

Buff Monster: Last year I published the Melty Manifesto, and that discusses the value and integrity of the hand made. It also discusses some of the downfalls of this modern age. I’ve always loved the old ways of doing things (in art creation and reproduction specifically) but how do I deal with this increasing digital world? All my hand-drawn lines get digitized and spread around the world, so why not just digitize them myself? I quite like painting pixels because they’re always off but that’s really appealing to me. 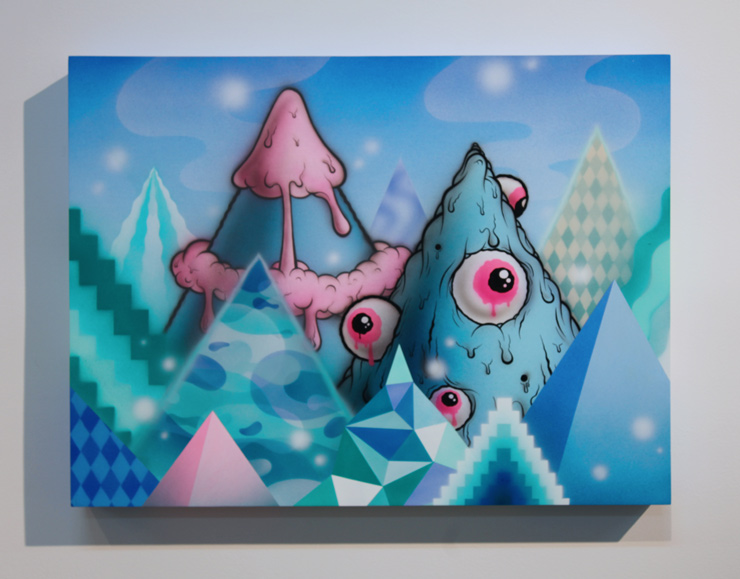 BSA: Was it a challenge to create a single exhibition with an artist like Dalek, whose own work could be described as more optic and kinectic in discipline?

Buff Monster: I’ve been a fan of his for a long time, which should come as no surprise. Even though he’s been at it longer than I have, I think we’ve both arrived in a similar place with our work. Namely, we created these characters that people know us for, but we’re keen to explore other things. I still make lots of character-based work, but the new work in the show doesn’t have any characters. I quite like how it all came together. The geometric nature of most of his pieces alongside the organic nature of my pieces plays really well; our similar color palette ties it all together. I’m very happy with the show! 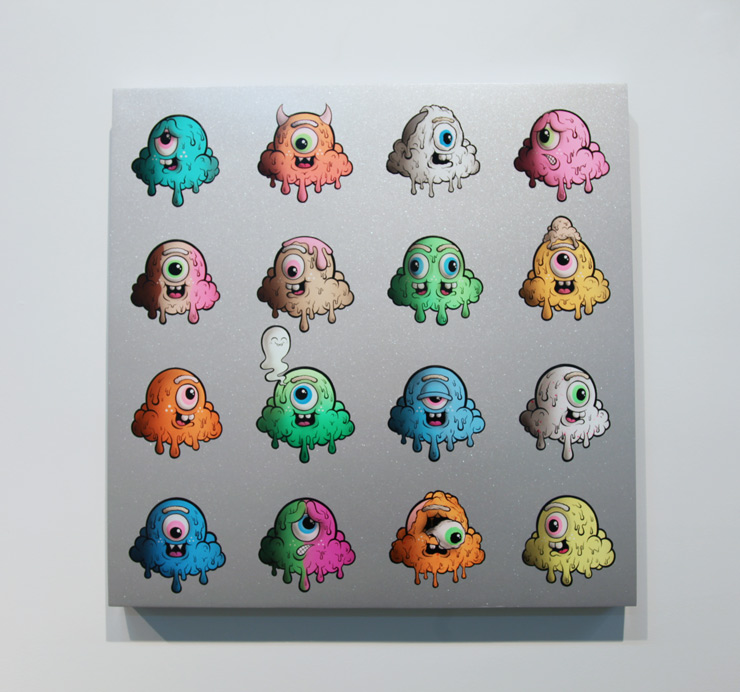 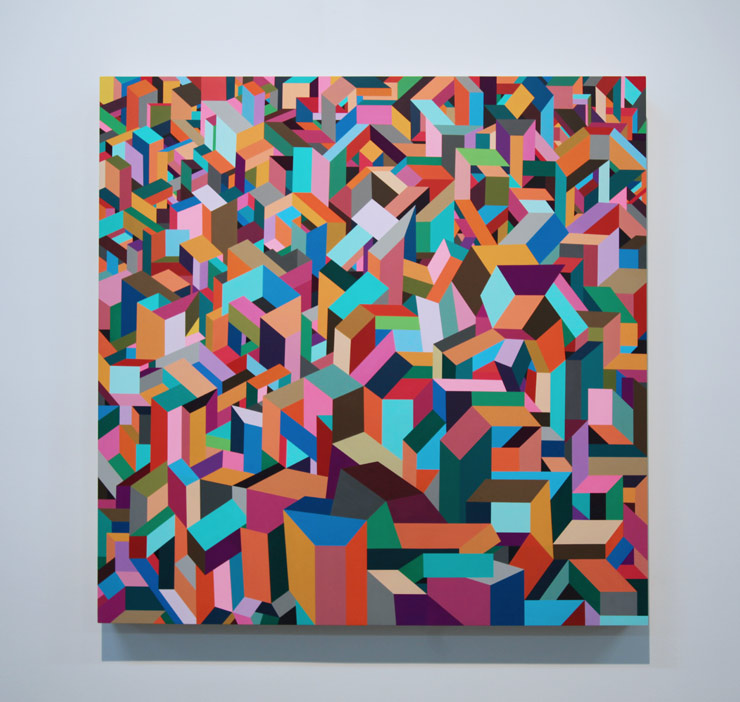 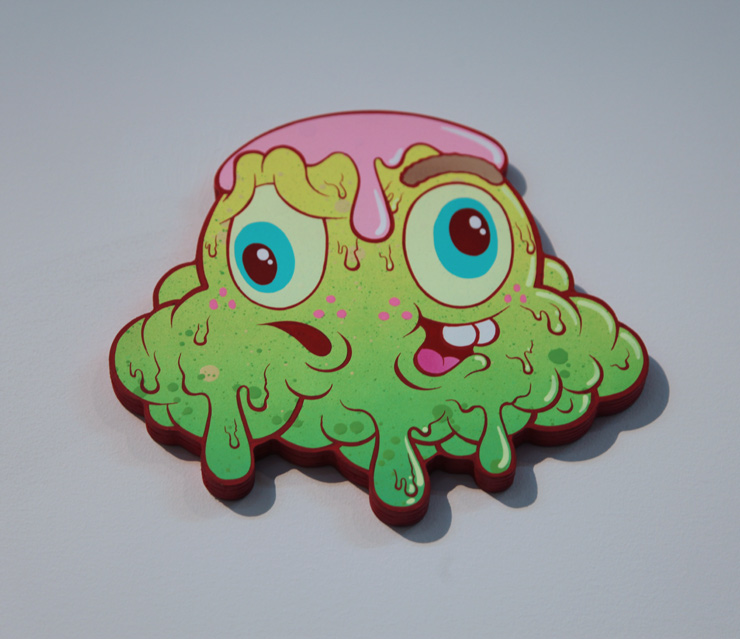 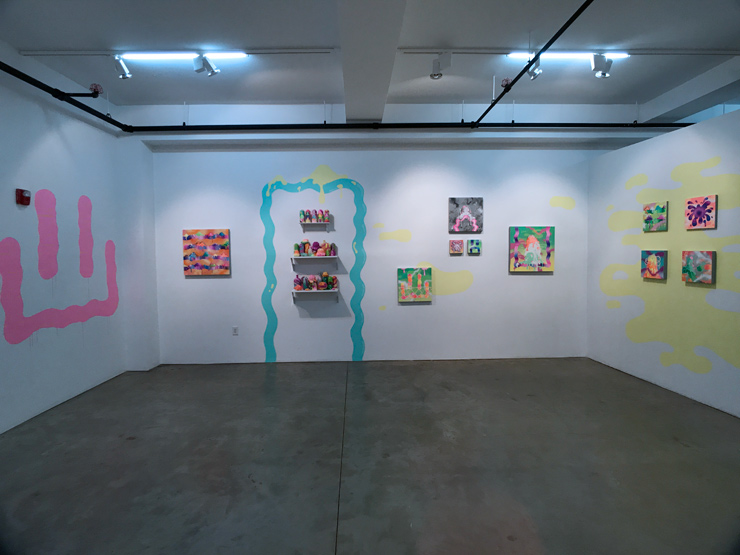 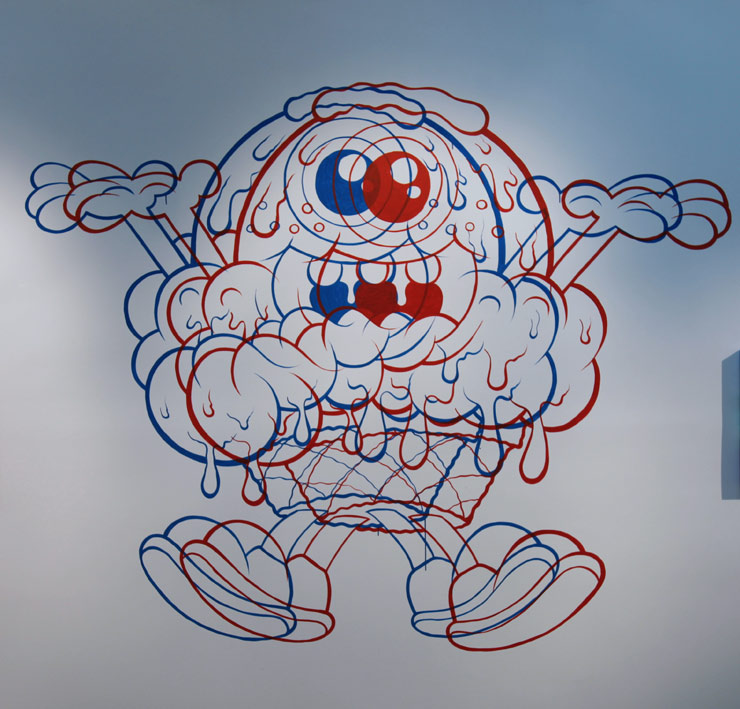 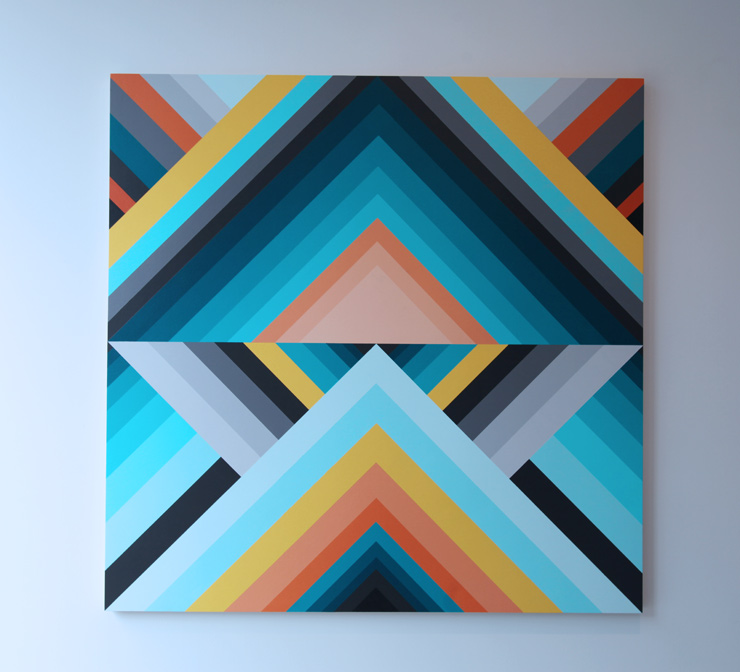 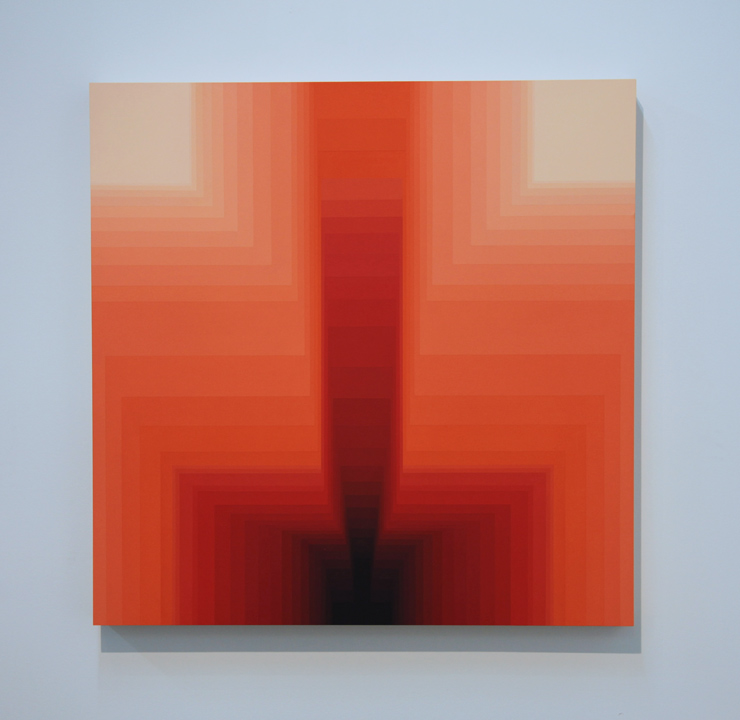 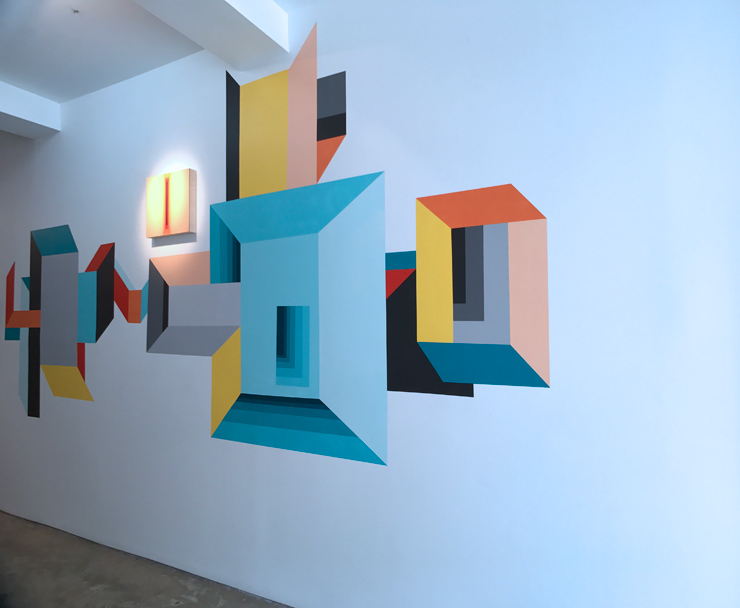 Dalek. Painted directly on the wall of the gallery. (photo © Jaime Rojo)

Tuco Wallach Moves to "Humasks" on the Street and Beach in France
Perhaps more studied than the typical aerosol vandal, Tuco Wallach works for days in studio to prepare his works that go into the public sphere. Stencils based on his merged photo collages emerge as ...
FaithXLVII x Moniker x BSA
In advance of Moniker in Brooklyn this May, we are interviewing some of the artists who are influenced both by street practice and fine art as the contemporary urban art category continues to ...
Images Of The Week: 03.30.14
Here's our weekly interview with the street, this week featuring Adam Dare, Bunny M, COL Wallnuts, Don't Fret, Icy & Sot, JMR, John Ahearn, Judith Supine, Michael McKeawn, Miss Me, Mr. Toll,...
Canemorto X Studio Cromie Salute this "Golden Age" in Famed Grottaglie
“Angelo, you've brought many oafs here,” says his mom at the dinner table, “but these guys… ” “They really look like rabid dogs,” remarks his father. Yo Daddy, you’re closer to the truth than you ma...
Spaik in Medellin, Colombia for "Pictopia"
The third edition of the Street Art and graffiti festival called Pictopia is taking place in Colombia right now and through November 19th in four cities; Cali, Medellín, Manizales, and Copacabana. Beg...
Brooklyn Street Art Buff Monster Dalek GR Gallery Jaime Rojo Steven P. Harrington