Here is the first public look at the new print by Li-Hill which he made especially to aid Heliotrope programs in Haiti and Braddock, Pennsylvania for Swoon and Heliotrope Prints. The limited run print will be released this week, April 6th, at a pop up show opening in Manhattan and we hope you can come. 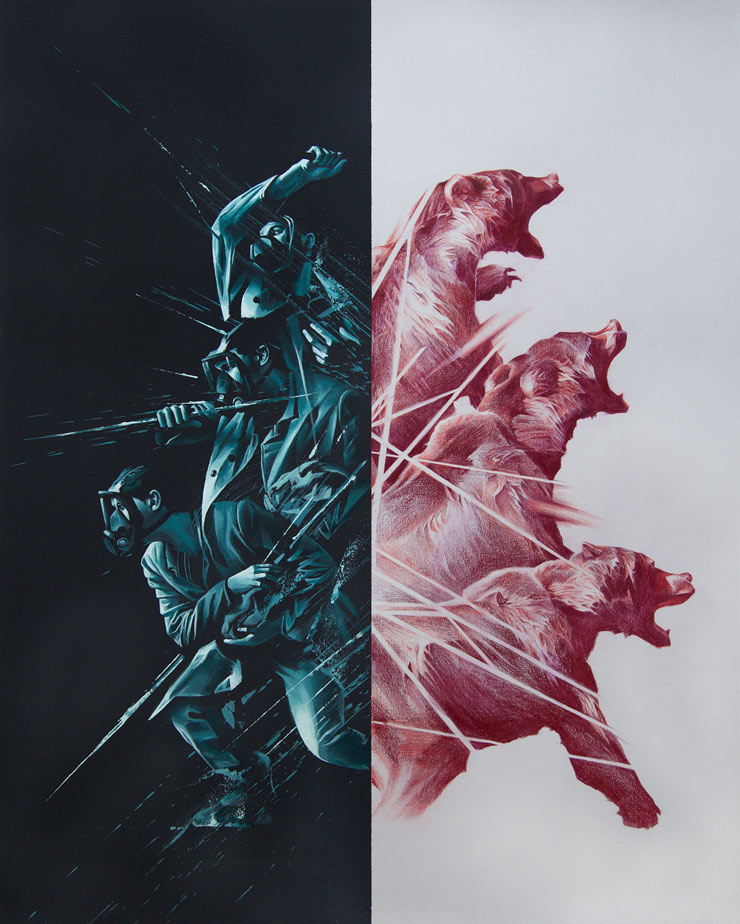 Li-Hill “Crumbling As We Climb” (image courtesy of the artist)

Street Artist Swoon asked BSA to curate this special Spring 2017 edition of prints and we chose Li-Hill as one of six world renowned Street Artists whose work we admire greatly and whom we think you will appreciate as well.

Canada-now-Brooklyn-based Li-Hill uses some of the language of graffiti in his mural painting, but you can be sure where it originates. There is a definite wildstyle, but it is scientific in nature, arrays of nerve receptors and transmitters; beams of light shooting outward, mirroring back. His figures are heroic, his animals allegorical, his diagnosis a thunderbolt of revelation. He says the works are meant as critique of the modern expressions of age-old battles of man against nature, man against himself, fears of losing our grip on technology. The complex sculptural installations, the painting, illustration, and stenciling – it blends and balances, and takes him around the world including Australia, Thailand, China, Myanmar… we last saw him in Moscow. Now he’s heading back to Montreal, closer to his familiar Toronto… but we’ll let him tell you about it.

We asked Li – Hill about this new piece for the Heliotrope benefit.

BSA: Can you tell us about the image you have chosen for this new release?
Li-Hill: The image I have chosen is something newly made for the release.

Lately I have been creating these split scenes, dividing the picture plane into a dark background and a light background to marrying two thematic and stylistic approaches into a single idea. This is the first time utilizing this approach off of a wall.

A lot of my work is about the effects our current global dynamic of information saturation, technological advancements and economic structures effect the outside and inner worlds. Many of my figures are about the psychological impact while the animals allude to the ecological effects. Here they are both represented and reacting to the circumstances of their world. There is also a reoccurring theme of man versus nature in my work and at it’s most basic level that is what this design depicts but the fact the two main subjects (the figure and the bear) face away from each other creates a more ambiguous reading, they could be attacking each other or both reacting to their own hostile individual situations.

BSA: Do you have a special connection with the people of Haiti or Swoon?
Li-Hill: Not specifically besides knowing her work for a long time. She has been an inspiration through so many of her projects. I find it really inspiring that she works to change the world around her by not just making artwork about that change but using that work in practical ways to benefit people. I think the first project that really impressed me about her approach were the floating ships. The fact that the project wasn’t just the act of having these floating artworks but that it created a community around them was so impactful. I also own a print of hers from donating to one of her projects years ago. It was the music box in New Orleans and the idea of a house as an instrument was so intriguing to me.

BSA: How do you see the role of an artist in relation to addressing socio-political/humanitarian issues in the world?
Li-Hill: I see this role shifting between artists and the work they create. I think it depends a lot on the artist and what they are addressing. I use to think that work that did not address these issues was a missed opportunity, that artwork should address the ills of the world to help better it. But sometimes I see it in another light, that if every artist and artwork were political or heavy with message, we would be over burdened. Sometimes touching on other subjects can allow the viewer a break from the pressures of the world. I do personally think that it is very important that artists do address these issues because in many ways we are set up in our society to impact a lot. It reminds me of a quote by Queen Victoria that one should “Beware of artists. They mix with all classes of society and are therefore the most dangerous.”

BSA: Many art fans are excited to buy prints of their favorite artists – have you made many prints in the past?
Li-Hill: No, I actually have only made 3 prints in the past and small runs of each. I have also never made a print of one of my figures in motion.

BSA: What new project are you looking forward to this year?
Li-Hill: I am really looking forward to the Montreal Mural festival where my proposal to create a semi-permanent installation has been approved. I am excited because it will be one of the first outdoor installations that is on the street as well as combining a community element. I will be asking neighbors to house elements of the installation on their balconies and in windows. It should be really interesting and a fun project. I also really love Montreal and haven’t been back in years.

We are honored that Li-Hill agreed to participate in this show with us and pleased that she is part of this great effort.

Joereal Takes Painting to the Roof top and Beyond (Video)
Joereal in Los Angeles likes to paint up on his roof and think about yoga and the spiritual life. He sends this brief video for you to contemplate many such things as you travel through this Saturday....
Never Crew, Wishes And Hopes For 2019
Today's special guest: Never Crew, (Christian Rebecchi and Pablo Togni), Swiss Street Art duo, environmentalists, neo-realist naturalists, mural interventionists We love this picture because in a simp...
"A Hounding Obsession": Armer, DarkCloud, Deeker, and GoreB at Factory Fresh
Interview with the artists; Talking about New York, dumpster diving for canvasses, hidden spots, and hounding obsessions. "A Hounding Obsession"  is a great name for this show because it aptly ...
Futura 2000 In Studio and "The 5 Elements"
EARTH, AIR, FIRE, and WATER. And FUTURA 2000. These are the five elements. “Hey Guys!” he bellows from the doorway and invites us in. Futura (photo © Jaime Rojo) A non-stop full-voiced welcome fill...
"Born In The Bronx" Expanded: Joe Conzo's Intuitive Eye on Early Hip Hop
Born in the Bronx: A Visual Record of the Early Days of Hip Hop Yes, Yes, Y'all, it's been a decade since this volume, “Born in the Bronx,” was released. The images here by photographer Joe Conzo ...