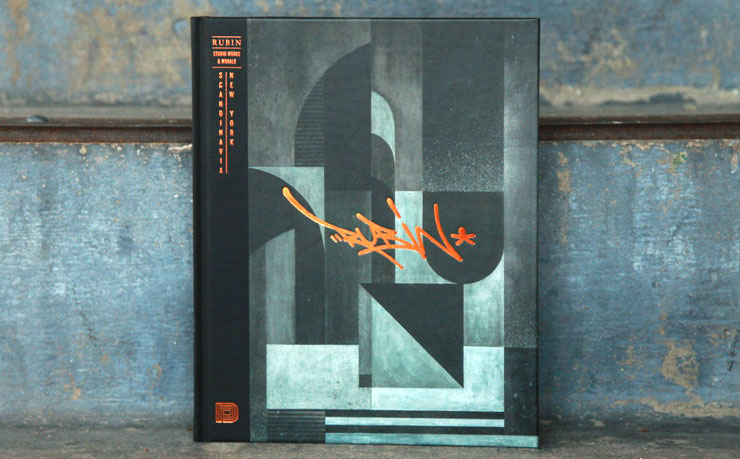 An immigrant’s tale, Rubin’s, and a New York story as well. For his first artists monograph the Fin by way of Sweden brazenly tells you his story in a most deliberate and considered way. It’s brazen because it’s a truth that has taken him a long time to be ready to tell, ready to be vulnerable. It’s carefully considered because – that’s his style. 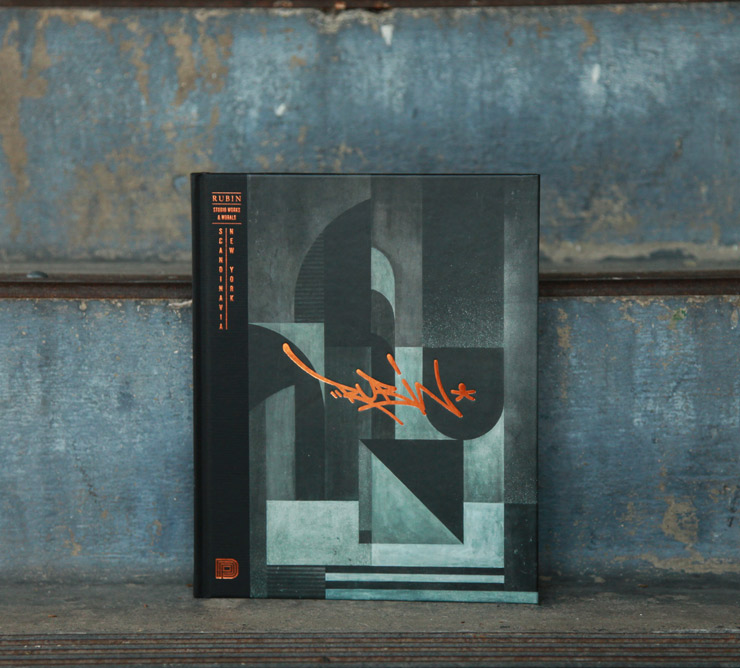 “New York is still very much a city of opportunities, but only if you are willing to work hard,” he says in the interview, and as you read his story of growing up in working class Sweden, treated as a second class Fin son of two guest workers living in a housing project, losing his father as an adolescent, running the streets and riding trains to nearby Gothenburg as a teen while the drug trade grew – you clearly get the idea that hard work is a lifestyle.

Along the way through his history to his current art on the streets you are regaled with the black and white geometric simplicity and spare dynamism of photography looking across roofs at brutalist architecture, down a long empty escalator at the tram station, up into the gray sky overtaken by a concrete water tower in his hometown Bergsjön, and across a detail of his own monochromatic mid-century modern abstraction on a canvas, spattered strategically to give gently curving geometric forms a crisp, celestial aura. 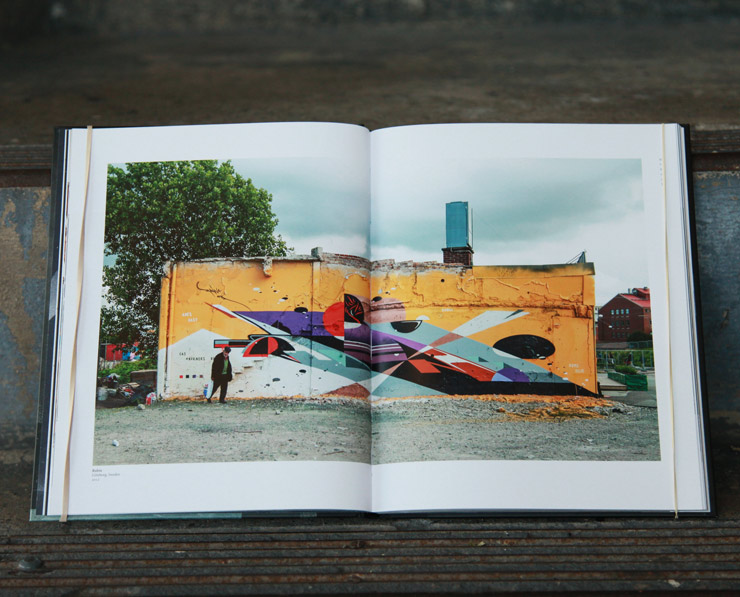 In fact it is when he takes a summer college class in photography as a young man that Rubin sights a shift in his worldview. His sharpened observation skills previously had been honed as a hell-raising graff writer and student of style, but now he was framing and containing and seeing the planes and the forms differently.

Seeing the book and speaking with him in person, you’ll quickly know that graffiti is at the root of his work today. Björn Almqvist, author, publisher, and editor of “Graffiti Burners”, also published by Dokument, offers a clear assessment of the graffiti writer who eventually stripped his style down and parlayed it into what we know today. 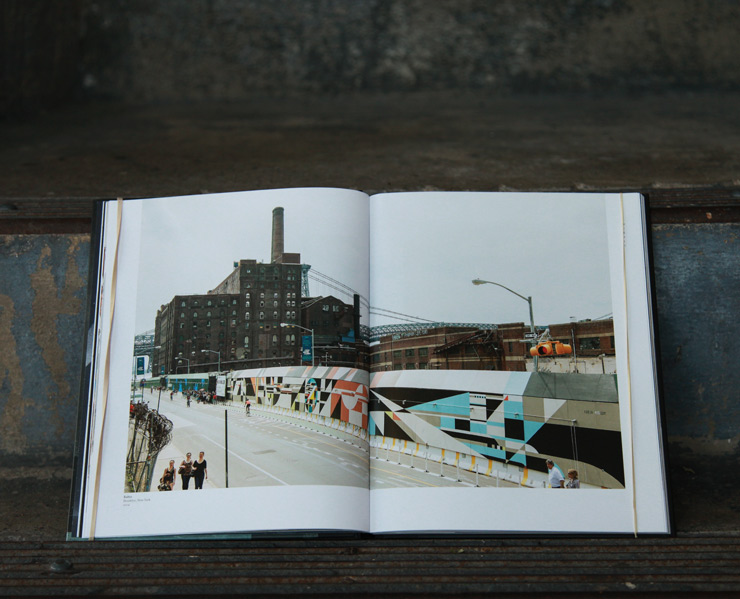 “Rubin spent the summer months with his grandmother in Finnish Lapland, but during the rest of the year his who existence revolved around the corner from Rymtorget, with the school and the tram stop only a couple of minutes away,” writes Almqvist. “Nearby was also the garage that Rubin and his friend discovered and transformed into Gothenburg’s most popular Hall of Fame. Rubin soon distinguished himself as a dedicated and skilled graffiti artist. He tried unusual styles and soon found his own forms of expression that inspred graffiti far beyond Bergsjön and Gothenburg. Art became his way of life, his identity and a way for him to relate to society.” 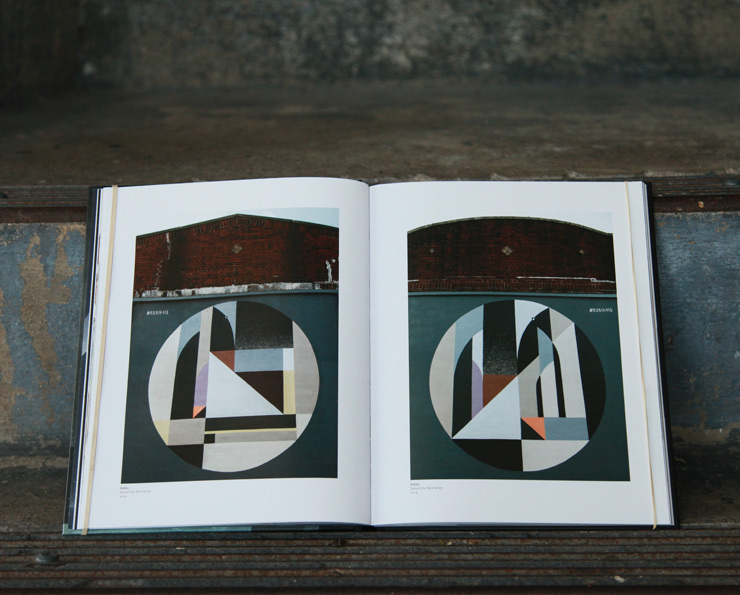 Years later Rubin still says that “everything originates from graffiti letters,” even though he tired of the restrictions and repetitiveness of simply writing his five letter tag- or five letters and three numbers: Rubin415. “I’ve been told that my style resembles traditional graffiti but with Scandinavian-style clean lines and shapes,” he says. Certainly he has attacked and regaled Brooklyn, Bronx and Manhattan and points around New York with this developing style over the last handful of years; murals indoors and outside, and a growing number of finished fine art works coming from his Brooklyn studio.

With an un-erring sense of color, the contained compositions offer an antidote to the chaotic quality of city living, but he carefully steps aside of any suburban pleasantry for the sake of safety. These are soaring city lights, swerving streetscapes, jutting smokestacks, rusted hulks, plump water towers, throbbing beams of light, hidden peeping entrances, refracted urban revelation. 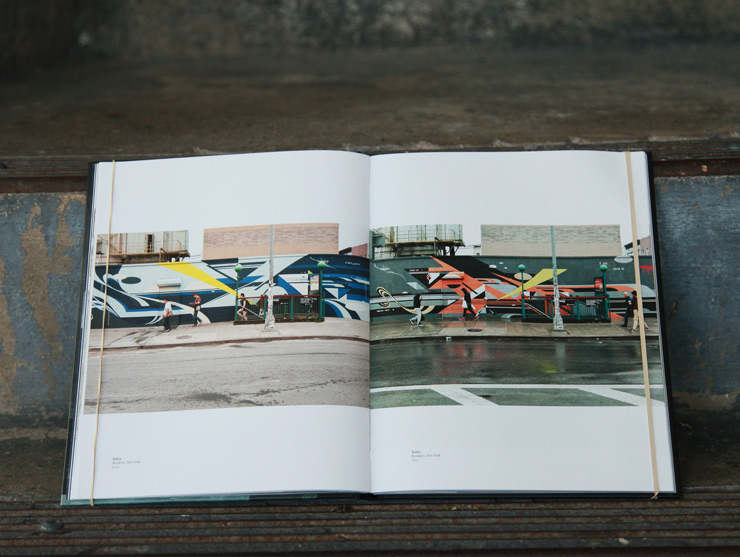 Not only has Rubin quietly made a name for himself with an industrious string of projects that doesn’t seem to end, he has knocked out brick walls, construction fences, rooftops and even a church backyard with sensitivity to context, an awareness of modern design history, and a strength of conviction big enough to alter whatever environment he’s in. 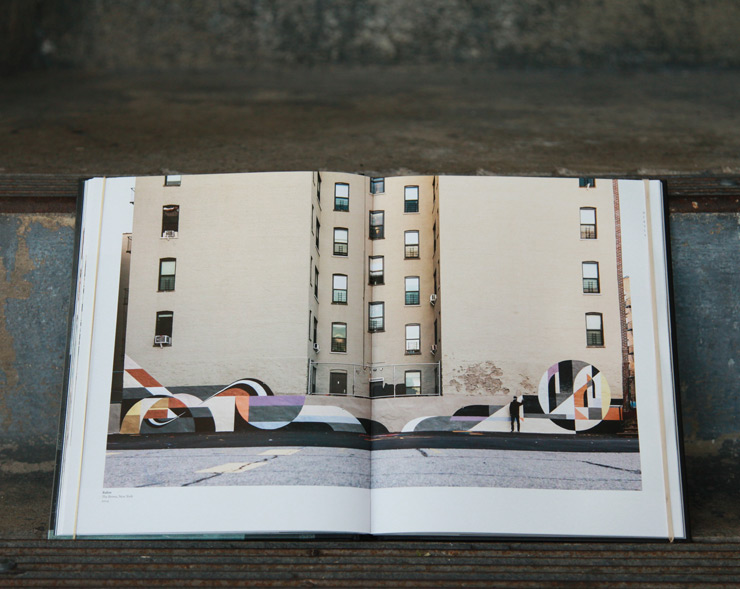 Rubin exhibition Scandinavia / New York is currently on view at the WallsWorks Gallery in The Bronx. Click HERE for further information.

BSA Film Friday: 02.13.15
Our weekly focus on the moving image and art in the streets. And other oddities. Now screening : 1. The Lurkers: "Bricks of Parmigiano" 2. India's Largest Mural: Tribute to Dadasaheb Phalke ...
Get Lucky in Brooklyn: Dont Fret Has Lottery Tickets!
“O god, there are noises I am going to be hungry for” - Carl Sandburg “The art world has always felt like a lottery to me,” Dont Fret says as he paints one of his distinctively odd and fabulously ...
Everyday Magic In The Navajo Nation with Stinkfish, Grafica Mazatl, and Killjoy Press.
Who is your muse? Most artists have one, or a few. The portraits that Street Artists leave on walls usually have a story behind them, a personal connection to the figure depicted. The Bogata based Sti...
Blek Le Rat Hits New York with New Hambleton Street Stencil and Solo Exhibition
Good to see pioneer stencil artist Blek le Rat on the streets of New York again last week for the first time in the US since Covid, according to his charming partner in crime, Sybille. Of course ...
Wall\Therapy 2015 Day 2
A lot of great action at Wall\Therapy yesterday with Daze, Jeff Soto, Maxx Gramajo, Onur, Never Crew, Nate Hodge, Vexta, and Andreas making a lot of progress on their murals in Rochester. "The arti...
Brooklyn Street Art Jaime Rojo Rubin Steven P. Harrington Street Art Book Review