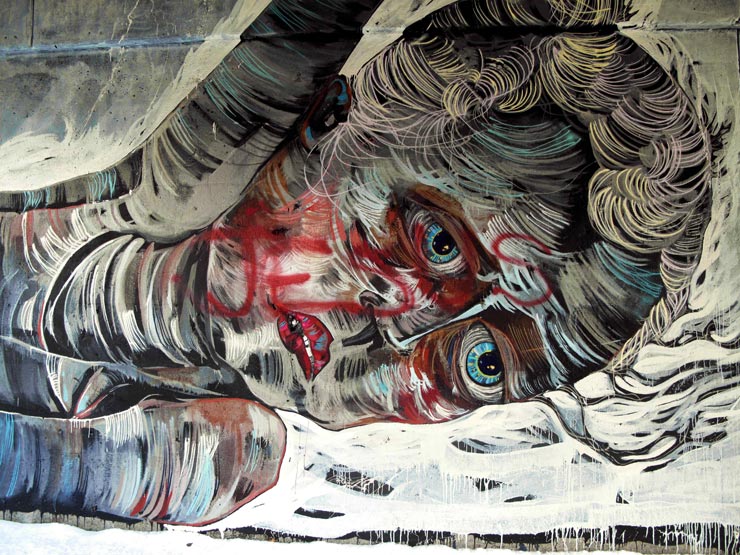 Street Artist Faring Purth is in many places and none of them as she likes to travel and paint and couch surf a bit – whether its Boston and Rochester or places further away like Uraguay, Argentina and California. Her slim and tapered figures and longly distorted portraits have character and sometimes symbolism, but usually they reflect her personal relationships and imagination. 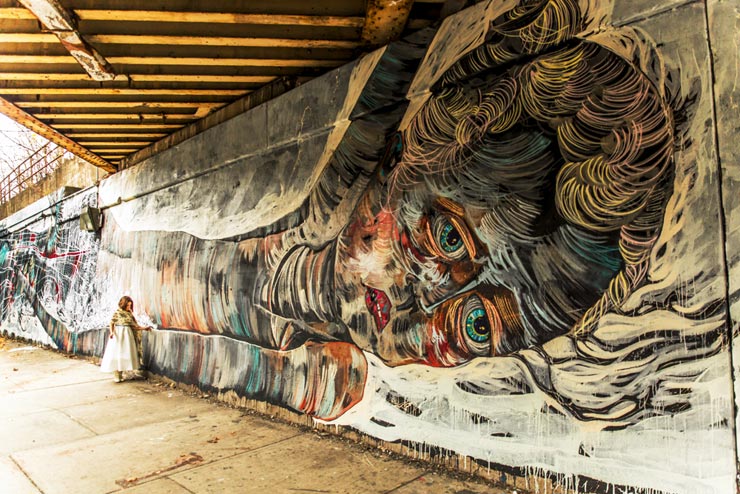 In contrast with the hyper sensual or sexualized depictions of the female perhaps more common in graffiti or street art, Purth wraps and unwraps the layering and complexities of character in the humans she depicts. She takes her time to create, sometimes painting over days or even weeks in a public space, where the work usually remains untouched by more than the sun, wind, rain, snow.

In the case of Etty, her piece completed in December in Rochester, New York for Wall Therapy, it was damaged almost immediately, and the act caught her by surprise, but maybe it shouldn’t have.

“Etty created some waves. As you know, a lot of my work involves blatant female nudity. With the tension Roa’s Sleeping Bears and Faith 47’s piece caused last year, they asked me to refrain from having her completely nude. So, I tried,” she says of the long figure lying (or floating) parallel to the sidewalk in an underpass. In fact the figure is not nude, at least not in any conventional sense, but it bothered someone enough for them to spray religious references in aerosol across the artwork. The birds are unclothed, maybe that was what upset them. 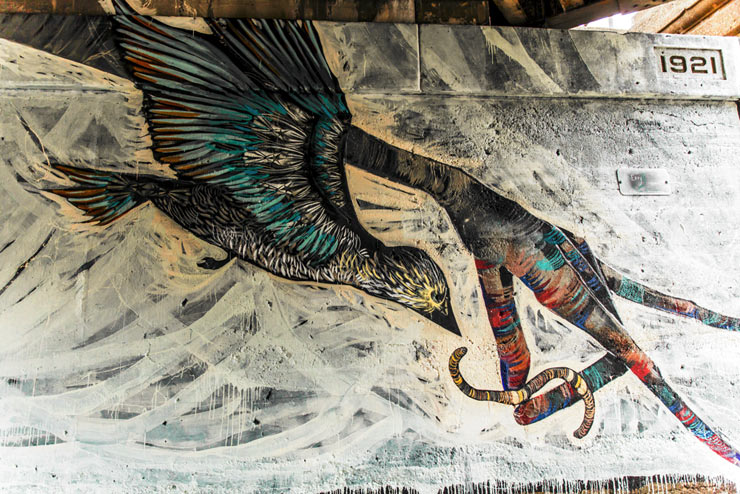 It is not often that you hear of Street Art festivals having problems with the reaction of people to bringing talented globally recognized artists in to adorn walls – in fact developers, city agencies, and arts organizations from Montreal to Lima to Baltimore to Łódź to Paris are now routinely dreaming up similar festival schemes to reinvigorate the cityscape and enliven public spaces.

Rochester for some reason isn’t having it, and this incident is just one more to add to those publicized in the press and privately related among some participants that certain locals aren’t always going to open their arms to you, regardless of your abilities or intentions. 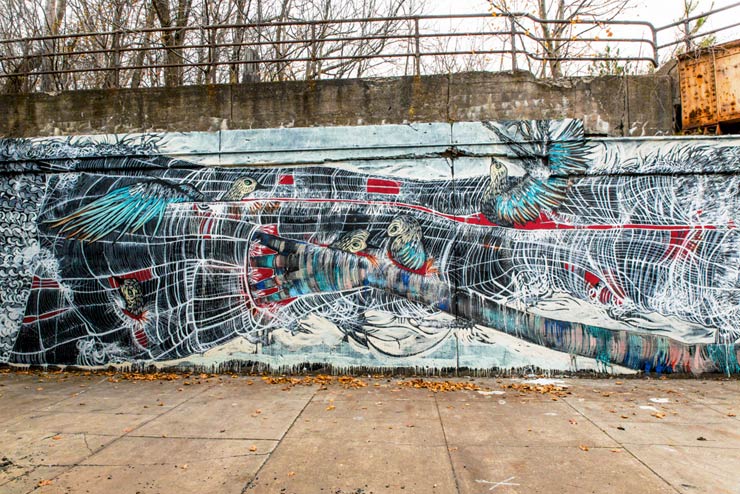 “Etty was created for Wall Therapy, but unlike most of the other artists involved I took my time with her while going back and forth to Boston and South America,” Purth says of the lengthy period for her installation of Etty which spanned some months. “I received equally supportive and hostile attention from the public while I was painting her. It was a new experience in more ways than I can count,” she says of the mural that measures 12 feet high by 125 feet long, her biggest yet. 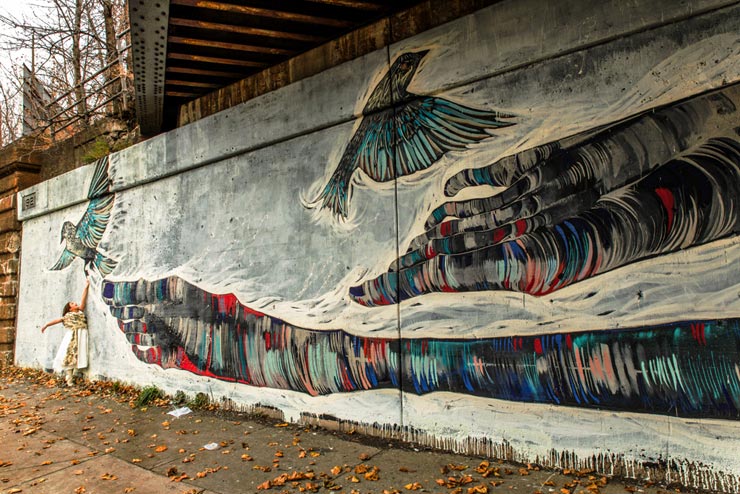 Finishing it in early December, she left her temporary home base in Rochester and travelled south to Buenos Aires to do some more painting with Street Artist EVER and to enjoy the warmer weather. But what awaited her when she got back was a surprise. “When I finally returned to Rochester, Etty had been defaced with the word “JESUS” and a red crucifix over her hand- a hand that was, in fact, feeding a bird,” she relates about the discovery, which left her cold.

“It was a profoundly difficult experience for me; That after giving so much to a single piece of work, she could, with one cheap can of Rustoleum, be so grossly wounded.”

These are the “rules” of the street of course, and anyone working in the public sphere doing approved or unapproved work fully knows that their labors are up for crossing out, additional commentary, or outright destruction.  So no tears were shed.

Intrepidly, Faring says she made her piece whole again. “I fixed her. Or rather, changed her, before hitting the road. She’s different now,” Faring describes the repairing she did like a surgeon. “(With) stitches and all, here she is.”

So have a look at the progress shots of Etty, the before and the after repair work. As she keeps moving and painting – just now she was in Kentucky – Faring Purth is still thinking about her experiences in the cold north. “It taught me a great deal,” she says.  No word on how Etty looks now, a month later.

MURAL Montreal Festival: Day 1 and 2
BSA is pleased to partner again with the MURAL Festival in Montreal to bring you images as the events unfold.  Daniel Esteban Rojas tells us it has been a slower than usual commencement this year, d...
Power To The Earth: Celebrating 50 Years of Earthivism / Dispatch From Isolation # 31
The Earth says “Thanks!” to us today. Unfortunately it doesn’t realize that all this clean air and water from the last couple of months is not intentional – we just had to stay inside our homes a...
Ben Eine A to Z (and then some) in Philadelphia
We are texting every day and everywhere these days. Ben Eine appears to be doing it across the entirety of South Philadelphia. Ben Eine. Mural Arts Program. Philadelphia. July 2015. (photo © St...
Adele Renault Grows a New Garden: Call It "Plantasia"
Something completely fresh today from artist Adele Renault, who tells us she is thinking about the beauty of nature more than ever. With this new mural of green leafy covering in Liège, Belgium, she ...
Skount "Tempus Fugit" : Time Waits for No Person
Spanish Skount in the Netherlands wonders today about the evaporation of time, ever slipping from your fingers. He says his new mural, of which he has done perhaps a hundred that we know of over ...
Brooklyn Street Art Faring Purth Jaime Rojo Mark Deff NY Rochester Steven P. Harrington Wall Therapy