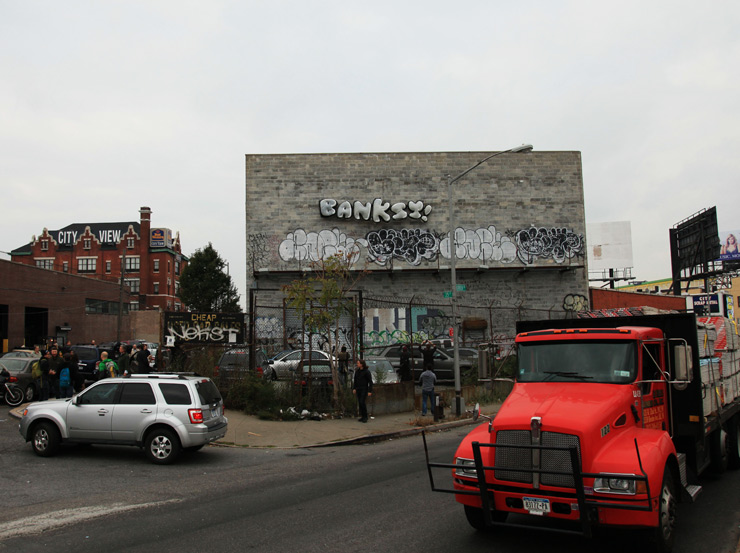 BSA Alone In Cell with Banksy Thieves and Car Jumper

Many had just photographed the two twenty-somethings as they scaled a ladder to cut down Banksy’s final installment of his New York “residency” in front of a growing audience of hecklers and fans underneath. Now the photographer, reporter and co-founder of Brooklyn Street Art Jaime Rojo found himself freed from his handcuffs (and shoelaces) to sit in a Queens jail cell on Halloween with the very talkative and nervous young guys who were discussing how their plan hadn’t panned out.

Only one day after BSA published “Banksy’s Final Trick” here and the Huffington Post, the enigmatic British Street Artist kicked in just one more treat for NYC in a plastic candy wrapper spelling out his moniker like a stylized throw-up, and Rojo was privy to more bon mots than he had planned.

Surprisingly, the art sites that had been breathlessly “covering” the events blow-by-blow somehow blew this story as the well known ubiquitous Street Art photographer and author was apprehended by police under their noses – taken by the arm as he photographed the bundle of Banksy balloons being stuffed into the back of their official van.

Luckily the mix-up was swiftly cleared as a case of mistaken identity that the chief lieutenant confirmed when he poked his head in the police car to look at Rojo and told the officer “You have the wrong man”.  Apparently somebody had jumped on top of a car and damaged it while the accused thieves were yanking Banksy and the crowd swelled below, and the auto acrobat had worn a cap similar to Rojos.  Moments after it was clear they had the wrong guy, the presumed right guy landed on the back seat next to Rojo.

Two hours later at the precinct, our photog was freed by the fairly friendly officers and he walked back to the now-deserted Queens site and hopped on his bike to continue looking for new stuff to photograph – but not before sitting in a cell with the accused Street Art thieves and an assumed car jumper while Banksy’s last October surprise slowly deflated into a curious pile of expensive plastic.

31 days of mischief went by and this anonymous Street Artist had mounted a full-scale multi-part series of installations in the public sphere and presumably has now left town. Meanwhile they’re saying the French artist Invader got popped the night before Banksy’s last balloon tag showed up.  His new tiled characters started appearing on Manhattan’s Lower East Side just this week. You can read more about it here.

Aside from that, not much excitement happened here on the Street Art scene. 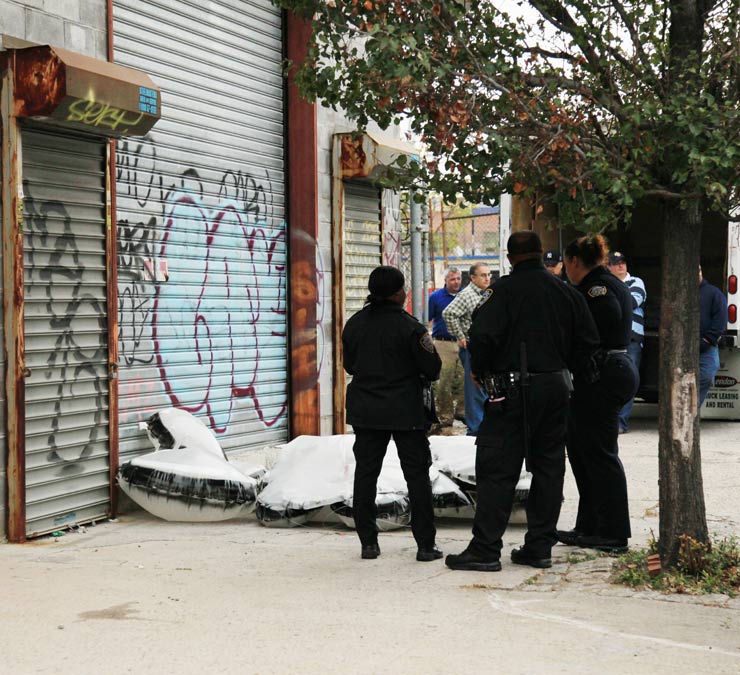 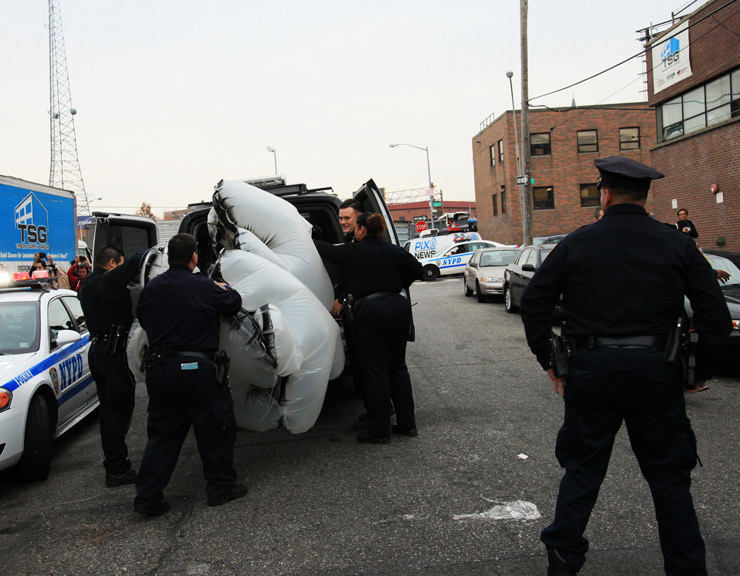 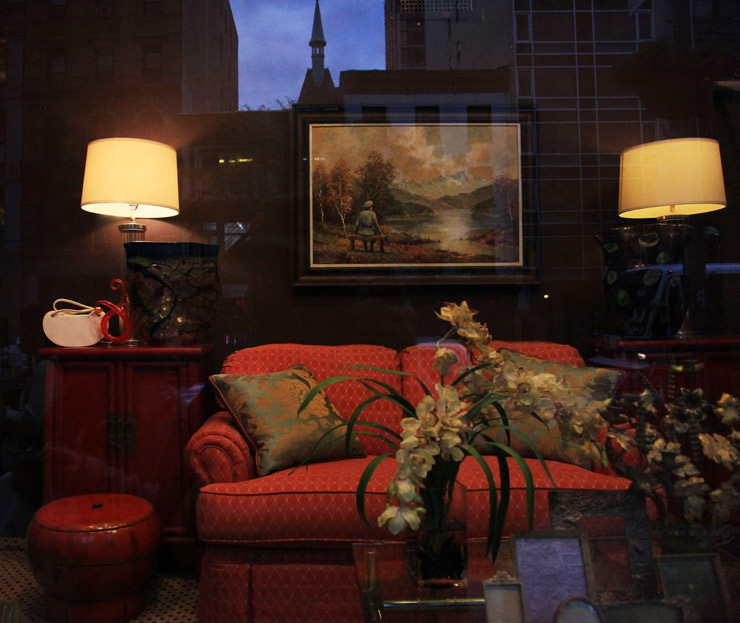 Banksy. SOLD! $615,000. Banksy purchased the painting on display at the Housing Works Thrift Shop in Manhattan while here for the ‘residency’. After painting the figure sitting on the bench and returning to Housing Works it sold for this incredible price – with all the proceeds going to help people living with AIDS/HIV.  (photo © Jaime Rojo) 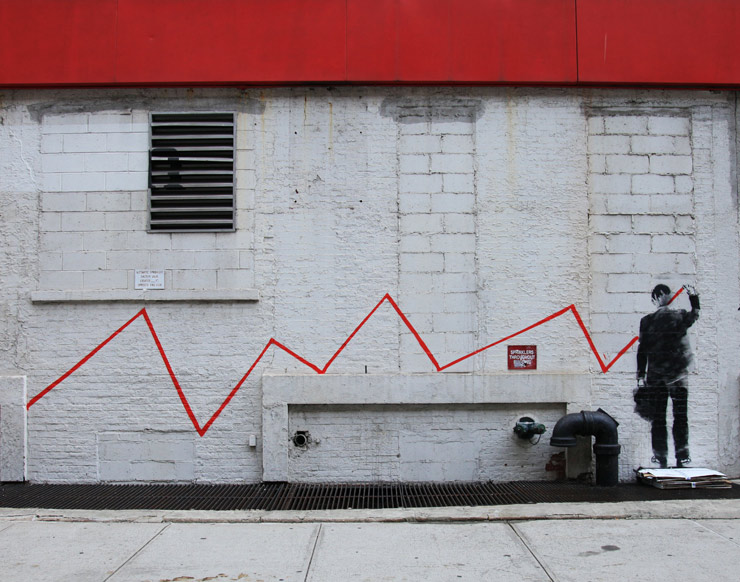 NOT Banksy. Artist Unknown. This piece appeared on the last day of Banksy’s NYC Residency. His official page is not claiming authorship of it. But we’re going to wager a slice of pizza that his is his too. Let’s see what happens. (photo © Jaime Rojo) 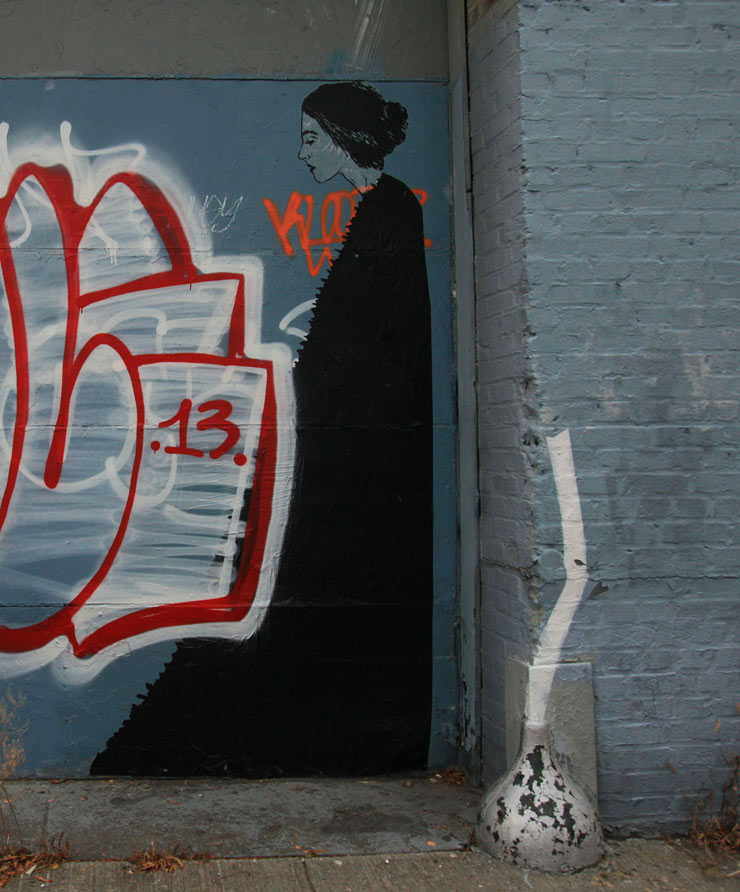 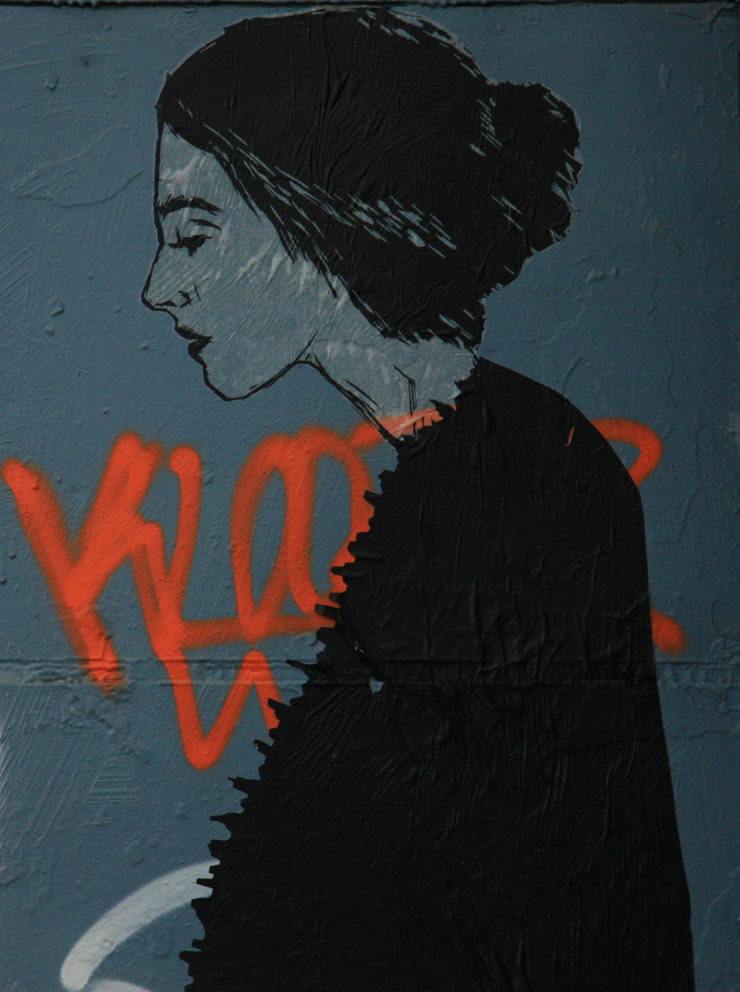 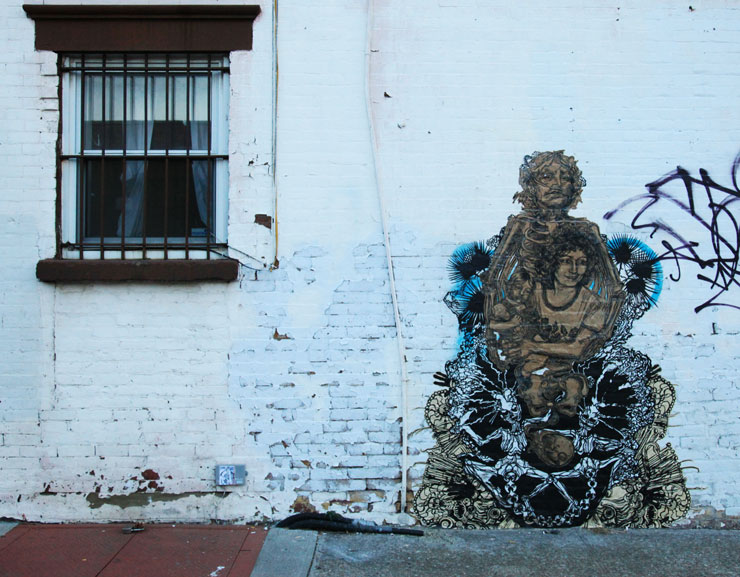 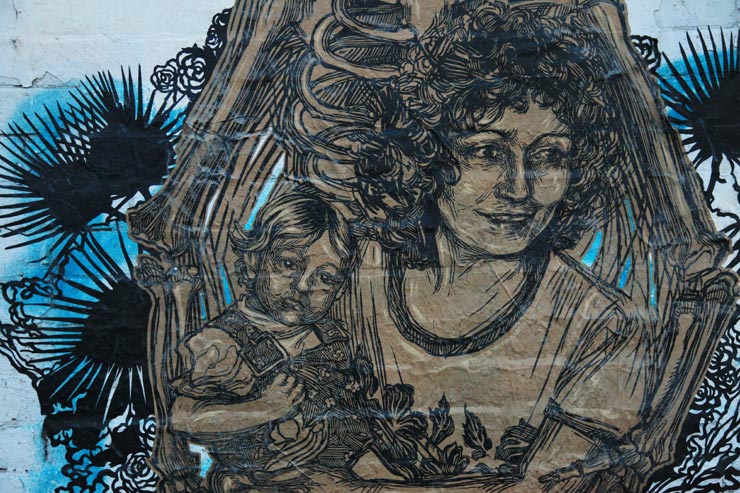 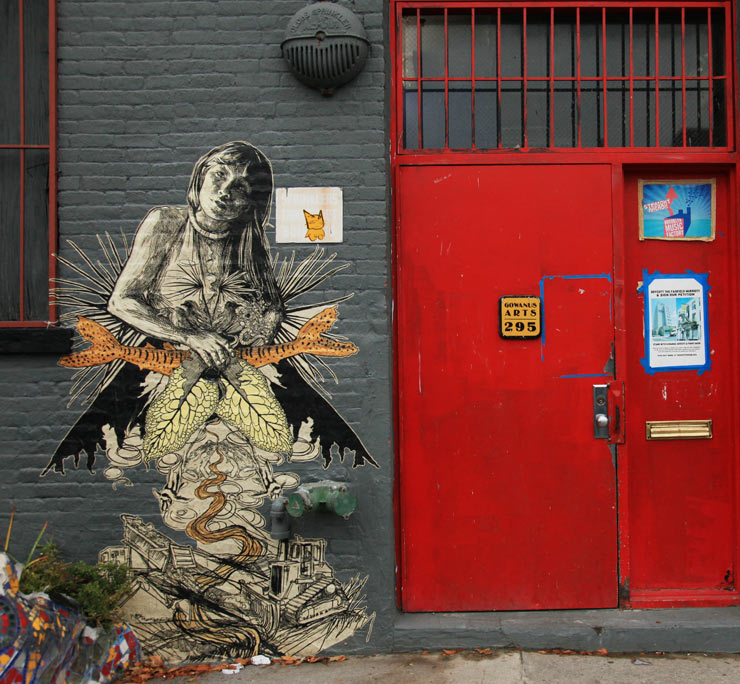 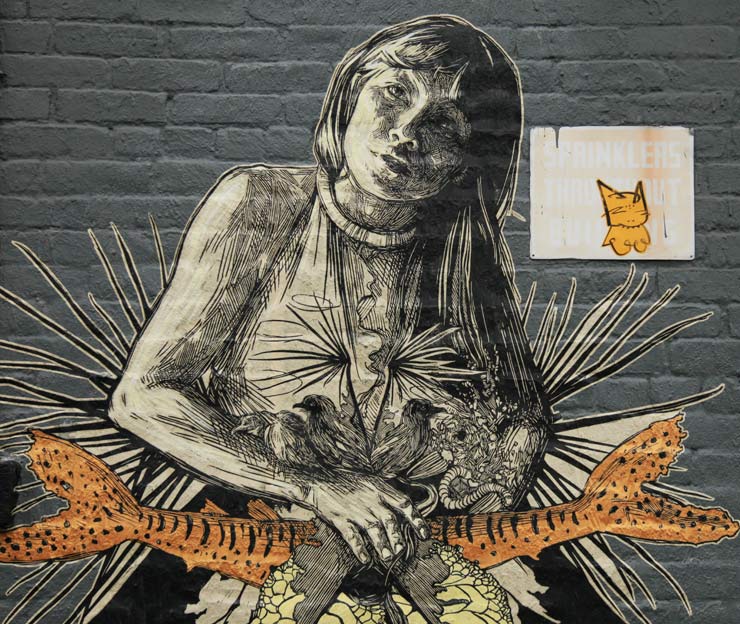 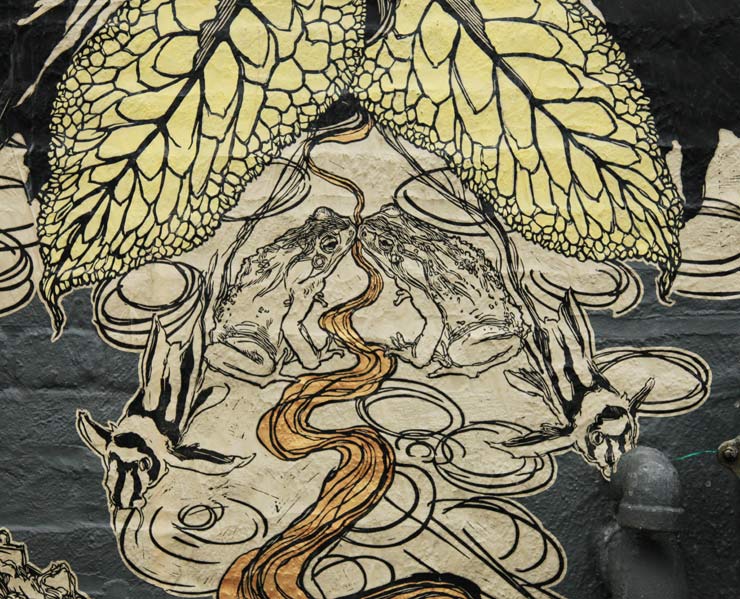 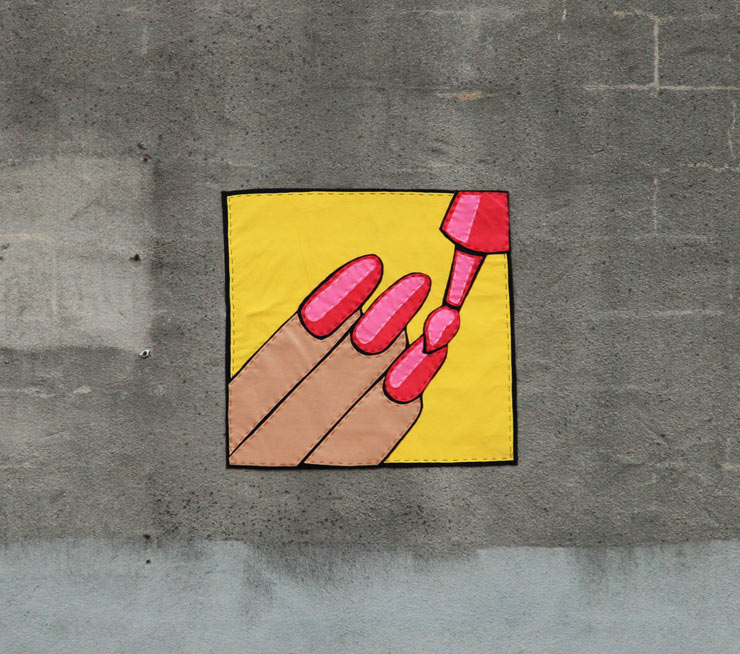 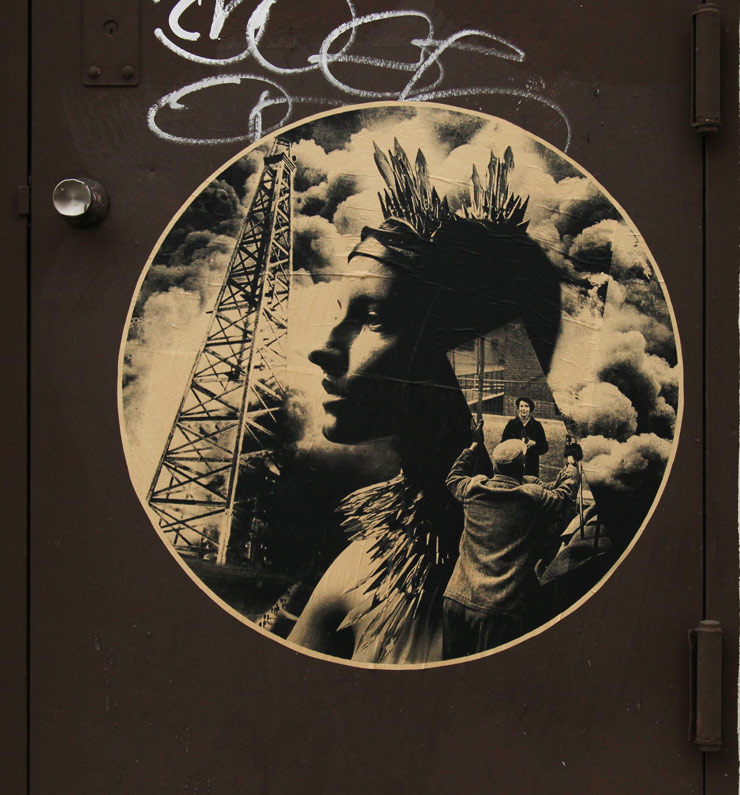 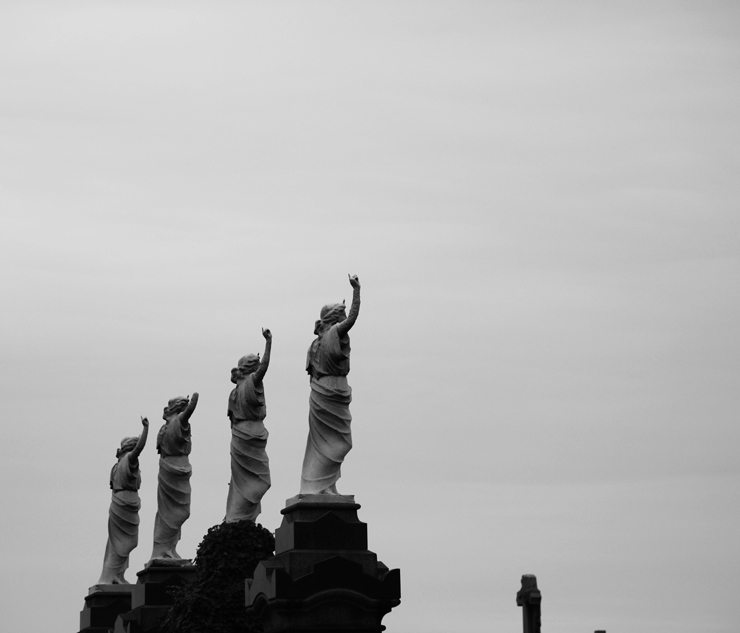 Ode to Spring 2019
We have been chasing this Spring 2019, beginning in Madrid late February Bilbao early March, mid-March the tulips in Berlin, then the warmth of spring in Queretaro, Mexico. Finally, we caught up with ...
finDAC Shines as Poseidia Rises In Berlin
Atlantis didn’t arise, as the prophetic clairvoyant Edgar Cayce said it would, but Poseidia certainly did only six months ago here on a Berlin street thanks to Irish Street Artist and fine artist fin...
BSA Images Of The Week: 11.30.14
Here's our weekly interview with the street, this week featuring Aiko, City Kitty, Clet, Dain, Deekers, JB Rock, KCIN, LUC, Mr. One Teas, Obey, Peros, PX$H6XD, Shepard Fairey, Smells, Specter, T...
Nomad Clan Honors Doncaster in Yorkshire with New Mural
“It's not often that artists get the chance to have their work in front of so many eyes,” says Hayler Garner of Nomad Clan, “and with that there's a responsibility to have that piece resonate with th...
Merry Christmas 2020 From BSA
You could be forgiven for feeling a little like a Grinch for a part of this Christmas; a global virus and a completely fumbled response to the economic well-being of all Americans has left many witho...
Banksy Brooklyn Street Art Cost ENX Invader Jaime Rojo Mika Steven P. Harrington Swoon