Today we have a little reminder of the upcoming third edition of the Galeria Urban Forms Festival in Lodz, Poland, which will be really take off in the beginning of September. Already new work has begun from Etam Crew from Lodz with a mural on Politechniki Avenue inspired by Julian Tuwim’s poem “W aeroplanie” (“On the Airplane”). The second one in advance is by Gdansk artist M-City.

On the roster for this year is ROA from Belgium, who will inaugurate the festival shortly, and many are talking about the 11-floor skyscraper that INTI from Chile is going to paint, which will be the largest in Lodz and one of the largest in Europe. Below you can see the one INTI did last year entitled “Holy Warrior”. Also on tap is a 3D pavement painting by Ryszard Paprocki and other guests include 3TTMan – the Spaniard whose work you saw in BSA coverage of Atlanta last week along with INTI – and TONE, PROEMBRION, and CEKAS from Poland.

Urban Forms will have a variety of related events during the nearly month long festival that celebrate the existing 24 murals along with the new ones, including live music, a laser light show, bus and bicycle tours. BSA will be bringing you exclusive coverage of the new murals as they go up, so stop by to see brand new work by these artists over the next month. 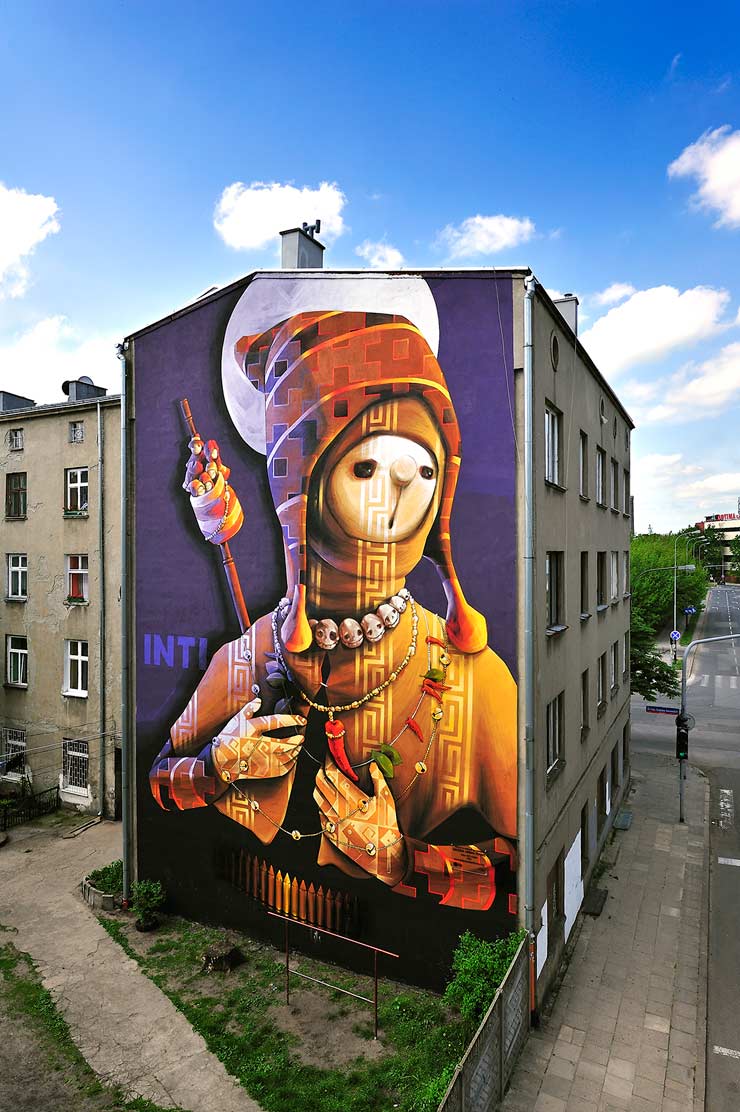 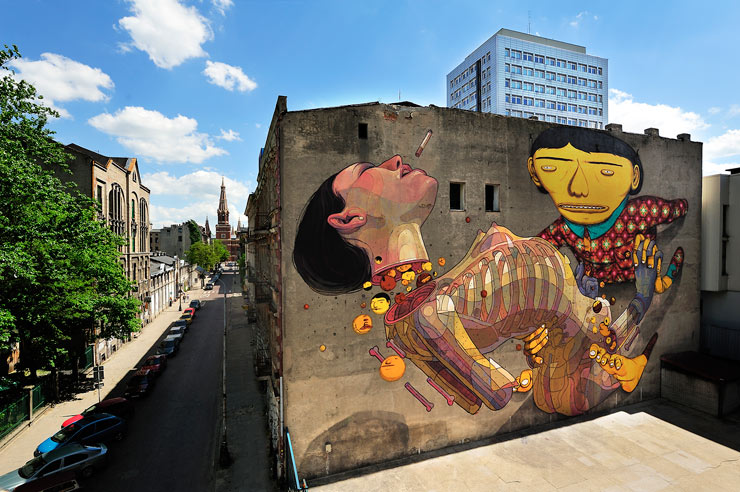 Lakwena: "Lifting Us Higher" and #kindcomments At The Houston/Bowery Wall
Despite the impression you may have from exploding, car-chasing action movies, New York can actually be a very kind place. Yes, New Yorkers can be abrupt, opinionated, and unvarnished in their assessm...
Madrid Dispatch: Primo Banksy and TVBoy
These days it is the default storyline of a non-British arts journalist to deign that their local street artist is “Tel Aviv’s Banksy”, or “Wanaka’s Banksy”. Here in Madrid, this artist just calls hi...
"Change" A Short Film By Doug Gillen in Kosovo
“This is a celebration of them directly,” artist Helen Bur says as she describes her new six-story high painting in Ferizaj, Kosovo. Warm and idiosyncratic, it is a candid photo of local youth whom s...
"Outdoor Gallery" Surveys Current Street Art Scene in NYC
Outdoor Gallery - New York City by Yoav Litvin The outdoor gallery is the one we visit most and NYC is always front and center in our heart even as we branched out to about 100 other cities and tow...
Jellyfish and Sharks and Octopi, Oh My! Tahiti’s ONO'U, Part Deux
Our intrepid Ms. Cooper had to island-hop to snap photos of the rest of these colorful murals in Tahiti for the ONO’U Festival. Raiatea is the name of the island and Martha was told that it was known ...
Brooklyn Street Art Inti Jaime Rojo Lodz Os Gemeos.Aryz Poland Steven P. Harrington Urban Forms Gallery