Street Artist Joe Iurato is a creator, thinker, feeler, explorer. He is inspired and challenged by the world he lives in and with his work he often aims to inspire others with his observations and insights. For the last few years his stencil work has touched on themes relating to personal economics, a search for spirituality, and looking at life through the eyes of his little sons and their sense of discovery, enthusiasm and wonder.  Existential questions are Joe’s normal bailiwick, and he uses his figures to review the evidence gathered, sharing his conundrums openly with a public he won’t meet.

If one’s art practice is autobiographical, Joe’s is a series of life lessons. Recently the skater / climber / photographer / sommelier / philosopher began to take the large figures he once painted on walls and vastly reduced their size to make them mobile. The resulting display-like sculptures have led to many experiments including taking them with him into the woods, the park, atop tree stumps, in creeks, jumping fire hydrants, perched on roof ledges and fences.  In the same way his boys imagine themselves inside the trucks and other toys they play with, Joe’s action figures allow him to go on adventures with scale, his imagination, and memories along his path to adulthood. For those lucky to stumble on one, the adventure can be shared. 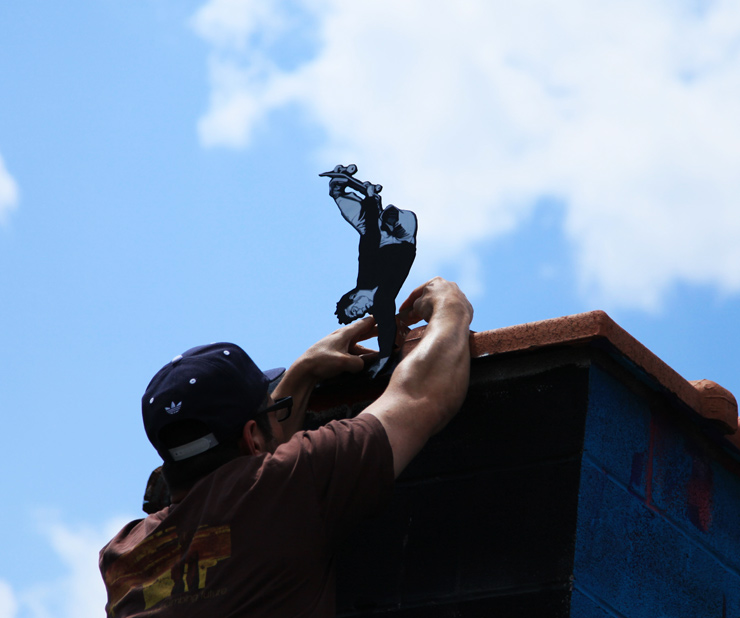 We asked Joe if he could talk to BSA readers about his new experiments on the street and how he sees the experience. We thank him for sharing so openly and thoroughly.

The pieces I’ve been making are small, spray painted wood cutouts. No bigger than 15” in size. The subjects vary, but they’re all very personal – they sort of tell the story of my life in stages. From break dancing to skateboarding to rock climbing to becoming a father, all of these things have helped define my character. For me, it’s just about revisiting those moments in a way that’s familiar. I’ve always appreciated seeing architecture and nature in a different light. As a skater, the tar banks behind a local supermarket, a flight of stairs, a parking block, a drainage ditch, a handrail, a wall – they all present possibilities for interaction and fun in ways they weren’t intended to be used. Skaters see things differently, I think.

With a little creativity, the world becomes a playground. Same thing when I got into climbing. A rock isn’t placed there with a set of holds and a sign that says “climb me”. But to someone who loves to climb, movement shows itself in the face of that rock. You see a line – a way to get from down here to up there – and you begin to sequence the movements in your head. Suddenly it seems as though the rock was placed there for you. It’s an amazing feeling to unlock a sequence and climb. The mindset has also trickled down to the streets for some climbers, where buildings and other structures take place of rocks. Urban climbing. 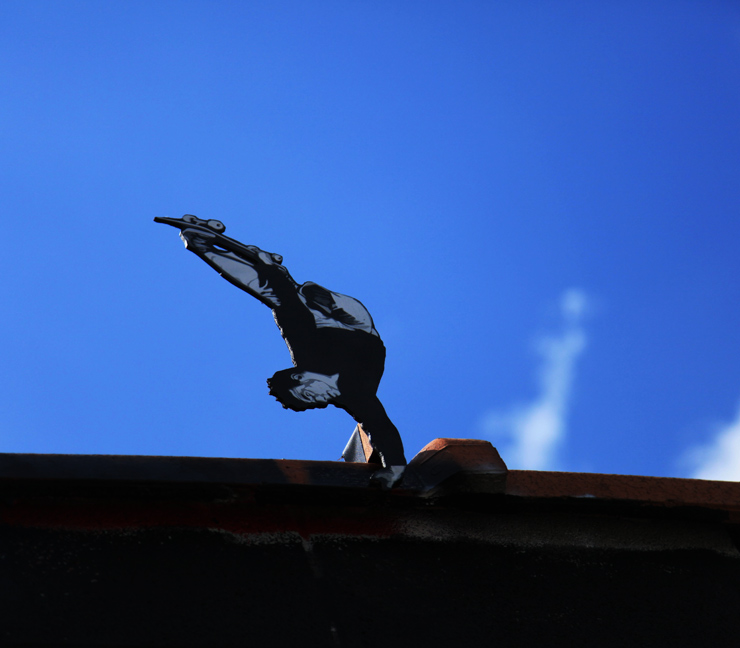 I was the editor of a magazine that placed emphasis on this discipline. So I approach these tiny street pieces with the same pair of glasses as I did skating and as I do climbing. I try to see the possibilities for a larger picture within a smaller space: a puddle can become a lake, a small crack in a cement wall can become a magnificent climb, a curb or window ledge can fall away into a desperate void, a planter box can become a place for a child to play, and a shadow might be a tangible space for a few seconds a day. There’s no limit to the possibilities and I find myself more and more looking at the environment for ways to interact. The small pieces rely heavily on their surroundings to tell the story, and so I take a picture with my phone or camera from the vantage point I think works best.

I guess what I hear most is that the pieces won’t last. Unlike a painting on a wall, or even wheat-pastes and stickers, these just don’t have much longevity. Secured either by a dab of glue, maybe even a piece of tape, and if there’s writing involved, oftentimes it’s done with chalk – they might last a few hours, a few days, and in the rare exception I place them out of reach, maybe a few weeks. They’re taken by time or a passerby, without so much as leaving a mark. And then it’s gone. I’m not under any false impressions that these could be landmark pieces or anything. 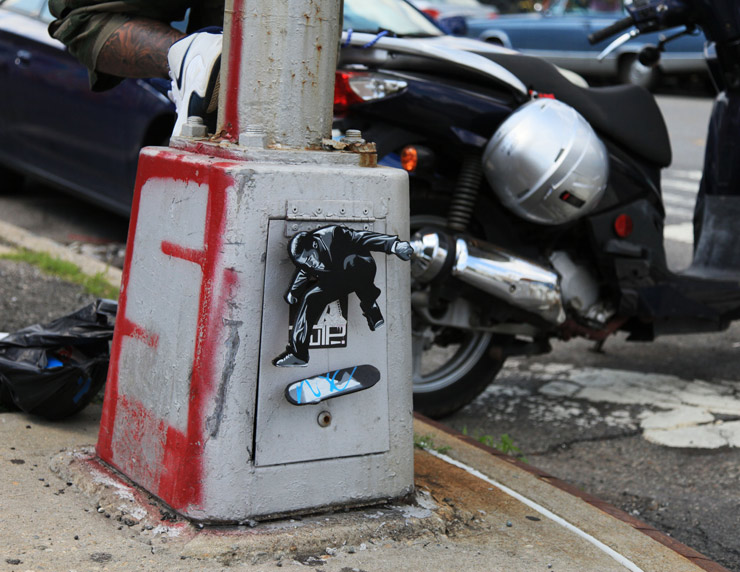 It doesn’t bother me that they’re fleeting. I got to do what I wanted to do, carried out my vision for the space, said what I wanted to say, and for the few that might have stumbled upon it during its life, maybe they had an experience they won’t forget. One of the elements that I love about doing these smaller pieces is the surprise factor. You might see it. You might not. If you do, though, it’s not something that grabbed you from across the street like a massive 40’ mural would. Chances are you caught it from the corner of your eye just a few feet away, and the connection made is intimate.

I’ve taken a little step back from doing large-scale pieces for time being. I have many reasons, but maybe mostly because this is where my heart’s at right now, and how I feel like expressing myself. I don’t feel like I should do massive sanctioned walls just to keep my name out there or because the opportunity’s presents itself. In a way, that’d be selfish. I always feel like I need to have a damn good reason, something to say, if I’m going to create a dialog with the street and the community. They deserve the honesty. And if I can’t give it to them on that scale, I’ll pass. 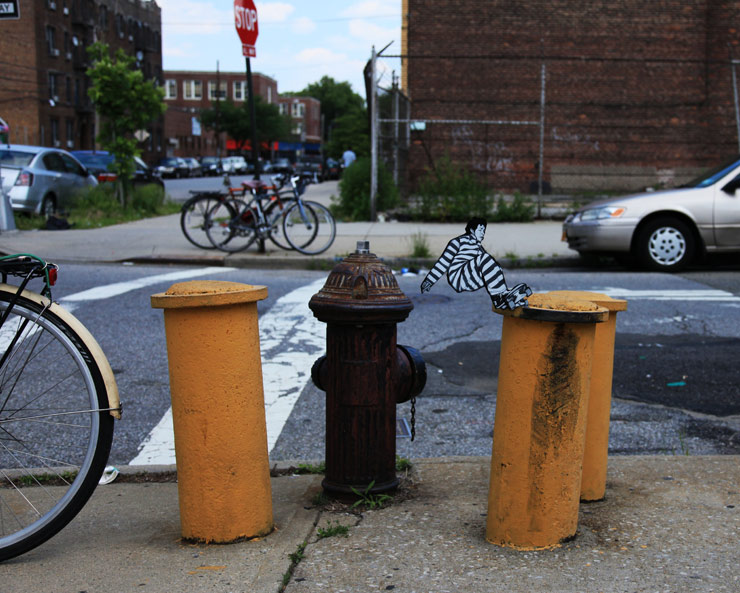 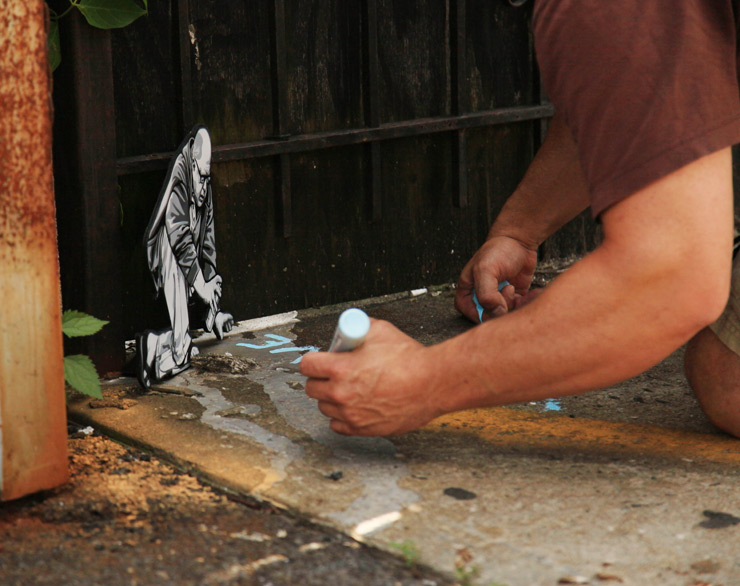 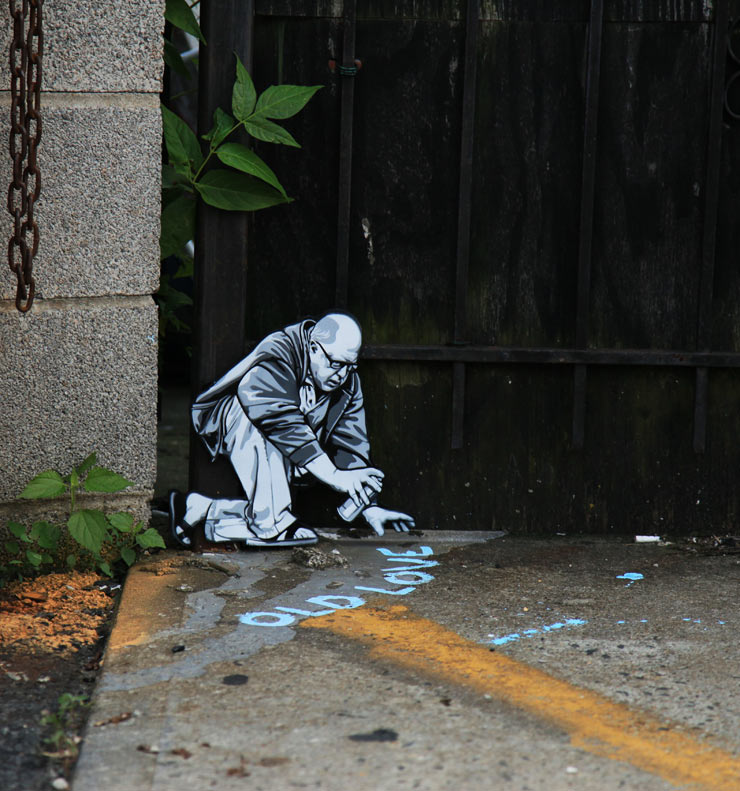 Ampparito Conceptualizes a Digital Solution to an Urban Planner Jam
Talented urban planning that has sufficient vision for the future will anticipate the needs and behaviors of a city, looking forward to its growth and reconfigurations over time. In L’Hospitalet, Spai...
BSA Images Of The Week: 08.03.14
It's the Dog Days of Summer and there are a lot of cool cats on the street right now. Here's our weekly interview with the street, this week featuring Adam Fujita, Be Everything, Che Man, Clint M...
BSA Images Of The Week: 09.06.20
Anarchists and lawlessness on the streets of New York? Where are you looking exactly? This is a narrative that charlatans like to slander our fair city with, where we spent 8 hours hanging out on...
BSA Film Friday 07.24.15
Our weekly focus on the moving image and art in the streets. And other oddities. Now screening : 1. Brazilian Street Artist Eder Muniz 2. David Flores' Nelson Mandela Mural Project 3. ...
BSA Images Of The Week: 02.07.21
Welcome to BSA Images of the Week. The first day of February brought New York a blizzard - a foot and a half of snow, complete with winds and drifts and buried cars. It drives everyone outside to...