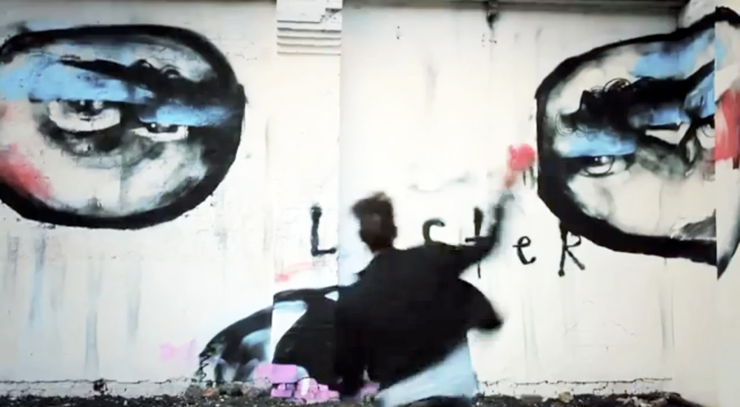 Now screening: “End of the Line” with Anthony Lister, Fasim’s “Ephemeral Mural”, and Kenny Scharf in The Boneyard.

Set to ‘I Wanna Break You in Half’ by Drenge and filmed/edited by Haruka Irie, this is just the sidewinding punk rock nihlistic attitude you need to start your Friday with Mr. Lister. Oh, no, this is gonna end bad, I can just tell.

Watch Fasim wielding poles and rollers and small hand brushes as an entire wall is completed in a jittery dubby two step that carries you from studio into gallery and then reception. Somehow they manage to work in cinematic psychological drama sequences too.

Kenny Scharf in The Boneyard

Downtown New York goes to the Arizona desert as Kenny Scharf rides out to the Boneyard to create a hippie craft on Supersonico Airlines. That is, once the bees nests are cleared out. This Boneyard Project list continues growing with a list of international Street Artists covering hulking decommissioned aircraft under the blasting sun. Word up to video maker Jason Wawro, who splices up the story (extra points for the Devo track).

A bit of amateur video to push you out of the apartment and hit the street and runaround after Sue….. and see if you can dance like this when you are 88. Also check out the very last thing Nana says in the video.

BSA Images Of The Week: 05.02.21
Hooray Hooray, first of May!" chanted your cousin Felix, "outdoor fucking starts today!" You both broke out in peals of laughter while your mom was walking out from the kitchen with a basket ...
Photos of 2020: #4 : The Great Dread
Happy Holidays to all BSA readers, your family and dear ones. We're counting down some of our favorite photos to appear on BSA in 2020 taken by our editor of photography, Jaime Rojo. We wish each per...
BSA Images Of The Week: 02.04.18
Stomping through the streets of New York Friday looking for new Street Art and graffiti, the cold and the wind reminded us of a saying we learned from the Norwegians during recent trips there: "...
GAIA and Fereshta Ludin - "Persons of Interest"
BSA is in Berlin this month to present a new show of 12 important Brooklyn Street Artists at the Urban Nation haus as part of Project M/7. PERSONS OF INTEREST brings to our sister city a diverse c...
Opiatic Overunder Gives You Poppies in Cleveland
As we enter into the languid sweaty city summer of your dreams and the cloud of concrete dust and carbon dioxide kicked up by passing cars settles onto your dewey skin, it's time to spend a few hours ...
Anthony Lister Blackb22 Brooklyn Street Art Fasim Jaime Rojo Kenny Scharf Steven P. Harrington The Boneyard Project