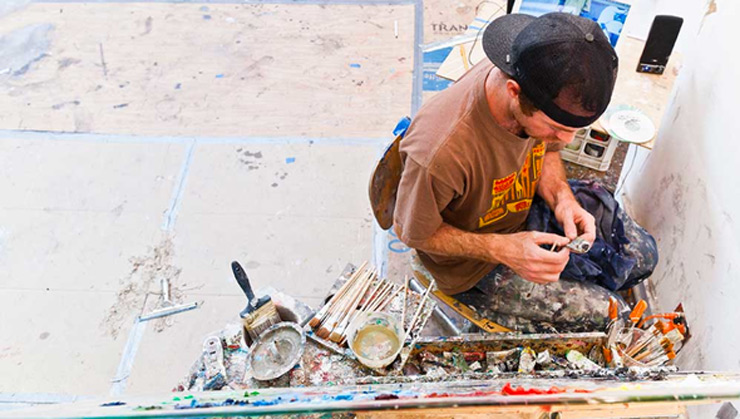 Amory began the Waiting series in 2001 with paintings based on photographs the artist has taken of ordinary city architecture and random people who he saw daily but never spoke to. He feels especially drawn to individuals who look lost, lonely or awkward—those who don’t appear to fit in socially. As the title suggests, the Waiting series depicts how people are distracted by constant internal dialogue, preoccupation with memories of the past and/or concern for the future, never able to live in the present moment. Amory’s work attempts to visually represent this concept of disconnection, detachment, and anticipation, conveying the idea of transient temporality that exists in the moments of our daily lives.

At first, the series, depicted travelers waiting underground. But as the paintings evolved, the people ceased to be exclusively travelers, and began to emphasize figures selected from anonymous snaphots of city streets. Although the experience of waiting remains, the perception of it has changed from one of mundane task to one leavened with transcendence.

The series has also charted the evolution of an artist—the reductive elements of the compositions provide an outward echo of the inner states of the figures. By reducing the elements of the painting as far as possible, a frozen moment is extended.

Lastly, I have developed favored motifs in the series, a kind of visual music, such as repetition of a human image, to show not only the passage of time but of the human being through it.

BSA Images Of The Week: 11.10.19
Welcome to BSA Images of the Week, baked fresh daily for you from New York, infused naturally with a gritty melange of international flavors. In this city, global IS local. Here’s our weekly i...
"I Don't Wanna Be, I Am" in Lisbon at Underdogs
Both the Portuguese Underdogs Gallery and the Spanish Ink and Movement (IAM) project have been building respectable artists rosters with a sense of intention - of current and former graffiti/street a...
Girl With a Shred Balloon: Banksy Slices Live at Sotheby's
Street Art fans are completely familiar with the ephemeral nature of art. Sotheby’s may not be. Last night at the venerated auction house in London the performance artist and wittily cerebral Stre...
Selections From Poli Urban Colors 2021 in Milan
20 students took part in painting at the 2nd edition of Poli Urban Colors last month in Milan, which is appropriate since its mounted hand in hand with a university. The rich diversity of styles comb...
ECB Photographed by Joel Zimmer
We’re counting down the last 12 days of 2012 with Street Art photos chosen by BSA readers. Each one was nominated because it has special meaning to a reader or is simply a great photograph from 2012...
5 Pieces Gallery Berne Brett Amory Brooklyn Street Art Switzewrland