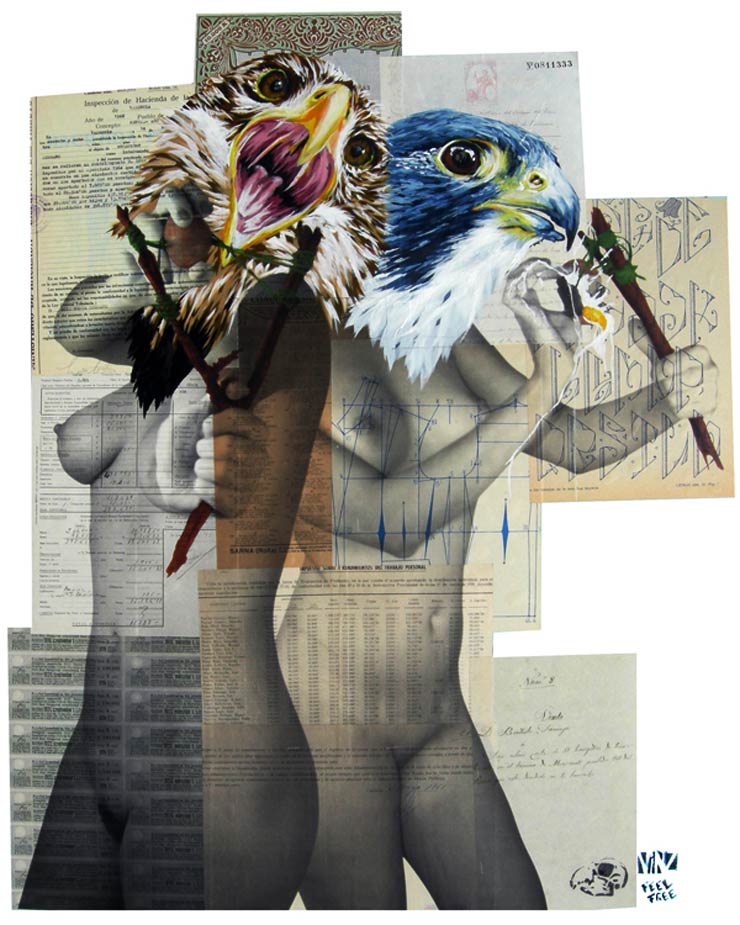 Jonathan LeVine Gallery in association with Sara & Marc Schiller of Wooster Collective are pleased to present Batalla, a series of new works by Valencia-based artist Vinz, in what will be his debut solo exhibition in the United States. In conjunction with the exhibition, Vinz Feel Free, a new book published by Wooster Collectivewill be released at the gallery on Friday, November 30 from 7—9pm, followed by an opening reception on Saturday, December 1 from 7—9pm.  Batalla features a series of mixed media collage works, paintings and sculptures. The central theme is a rebellion against governmental, corporate or religious impositions placed upon society to establish social order at the expense of personal freedom.

Vinz uses a multi-step process to create his unique imagery. He first photographs nude models, either isolated or orchestrated in small groups. He then paints animal heads onto large-scale prints of the human figures, creating hybrid subjects with a system of symbols attached to various species—birds signify freedom and fish represent consumerism while frogs and lizards convey authority.

In 2011, the artist began applying this series of work—the Feel Free project—to the walls of his native Valencia and other European cities using wheatpaste. Taking a more delicate approach to his studio work, Vinz collages paper ephemera into a background texture, as a base to print the figures onto, before painting details in enamel or gouache.

“Tapping into the question ‘What is Freedom?’ with arresting images in mixed media, Vinz is one of the most important emerging artists from Europe today.” — Sara & Marc Schiller of Wooster Collective

ABOUT THE ARTIST Vinz was born in 1979 in Valencia, Spain, where he is currently based. He received a BFA in 2003 from Universidad Politécnica in Valencia. In January of 2012, his work was included in Hybrid Thinking, a group exhibition curated by Sara & Marc Schiller of Wooster Collective at Jonathan LeVine Gallery. Vinz was recently invited by esteemed fashion photographer Mario Testino to collaborate on two images which were published as spreads in the December 2012 issue of VOGUE Spain, for which he was guest curator.

Beneath The Streets, New York's Century Old Underground in Photos and Aerosol
New York’s train system carries an estimated five million per day, is a little over a hundred years old, and for most is limited to the ride. Urban explorers, graffiti writers, artists, photographers ...
Doug Gillen, Wishes And Hopes For 2019
Doug Gillen, London-based Street Art scene documentor, commentator, lecturer, entertainer and host of his own program Fifth Wall TV (fifthwalltv.com). The photo I've chosen is not street art but carri...
Icy & Sot x Moniker x BSA
In advance of Moniker in Brooklyn this May, we are interviewing some of the artists who are influenced both by street practice and fine art as the contemporary urban art category continues to evol...
4th of July 2022, Let Freedom Ring
Untitled. 4th of July 2022. (photo © Jaime Rojo) “So let freedom ring from the prodigious hilltops of New Hampshire. Let freedom ring from the mighty mountains of New York. Let freedom ring from t...
Seniors Getting Up in Belgrade Add to a Parade of "Granny Graffiti"
The demographic contrast is colossal between the stereotype of your grandparents and the archetype of a delinquent hooded graffiti writer who bombs the margins of the nighttime metropolis. Senior...
Brooklyn Street Art Jonathan Levine Gallery Manhattan NYC Vinz