Not all Street Art is ephemeral. Some of it may outlast you.

As winds and rains and the forces of natural erosion go, wheat-pastes and stickers and photographs and other tentatively attached bits of Street Art whimsy are the first to go. After that, aerosol painting, stencils, bucket painted rollers, even hot-glued slabs of wood eventually fade and disappear. If it’s not damaged or dissed, pulled down or pried off, it’s probably because it’s made of heartier stock than your average Street Art and it has no intention of being evicted. 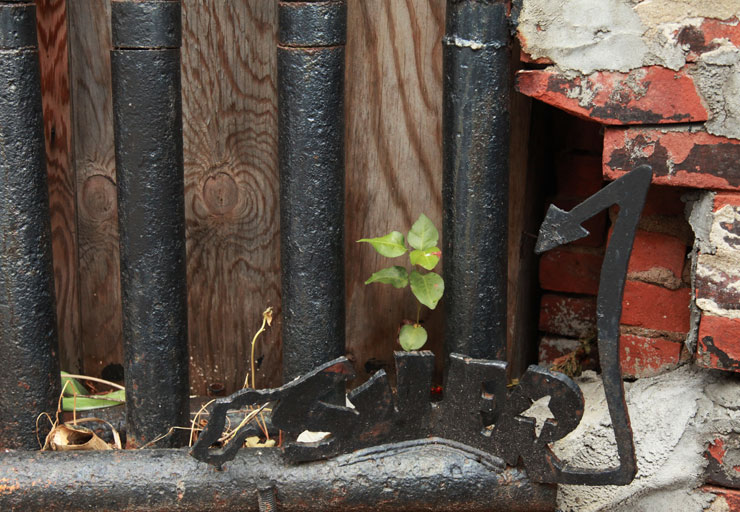 For example, REVS. Around 2000 a guy who BSA considers a missing link between graffiti and Street Art started welding his hand-cut pieces of steel to metal structures around the city, and thanks to it being his professional vocation, he knew how to make them endure. The chunks of metal, many of them tags, some of them years old, still ride in all their burnished badass glory near parking lots and garages and abandoned factories hiding out in plain site until you stumble on them, or bang your shin on them. Since Street Art is open to every artist today, other street sculptors have similarly affixed their work to posts and signs and hand-railings with bolts and screws and sometimes a blowtorch. 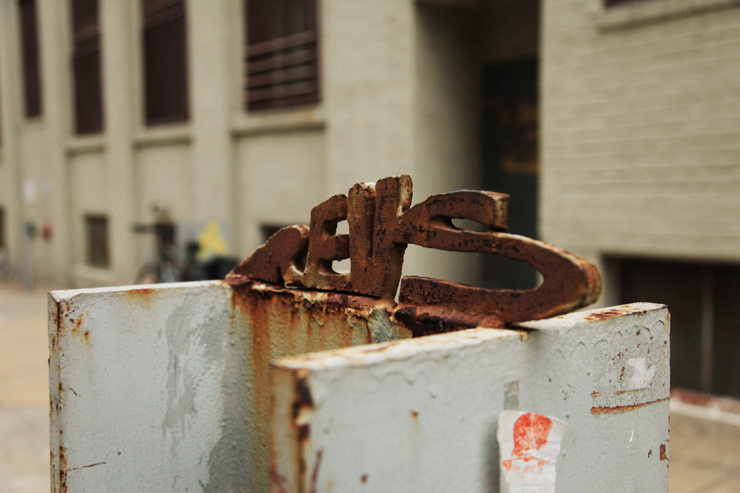 These pieces have their own unassuming but steady personality, usually a little less cloying and attention-seeking. Not to worry, you will eventually see them because they persist; rusting, oxidizing, decaying slowly and holding tight to this little piece of New York longer than many of the one-hit-wonder Street Artists who come and go every year. You may abandon New York eventually in search of better opportunities or a house in the suburbs, and some of these will still be here when you come back.

Here is an exclusive heavy metal collection from photographer Jaime Rojo on the streets of New York for you to rock out to. 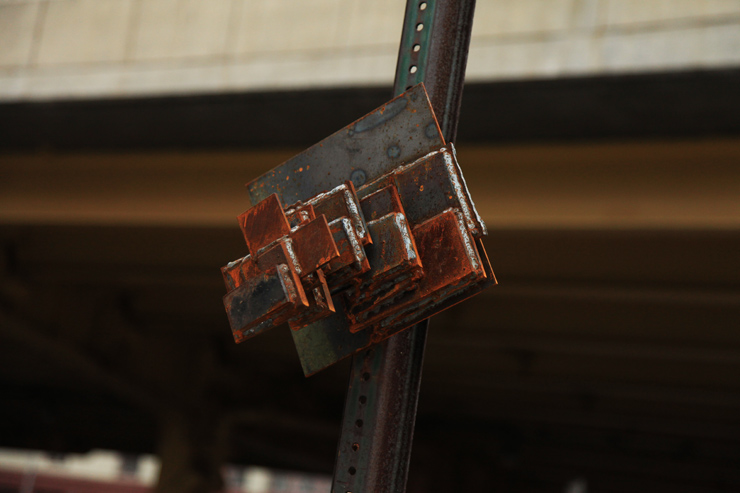 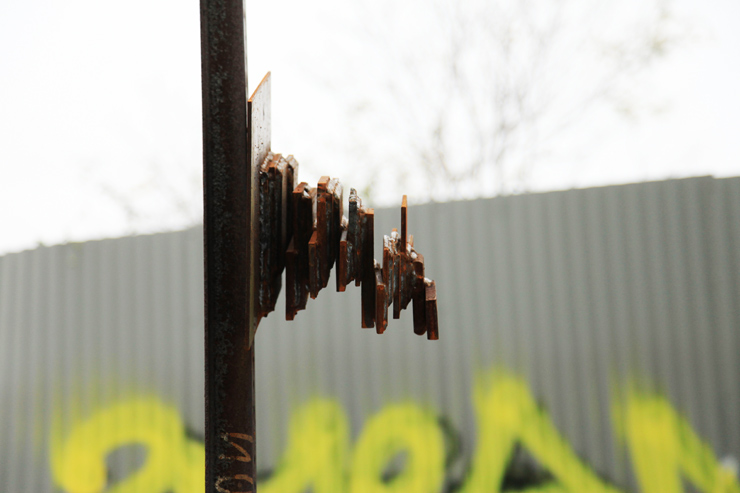 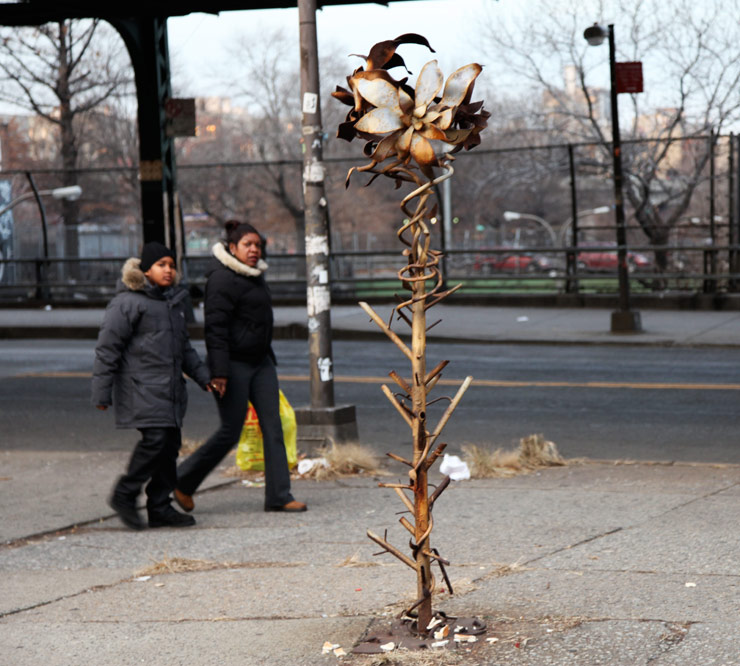 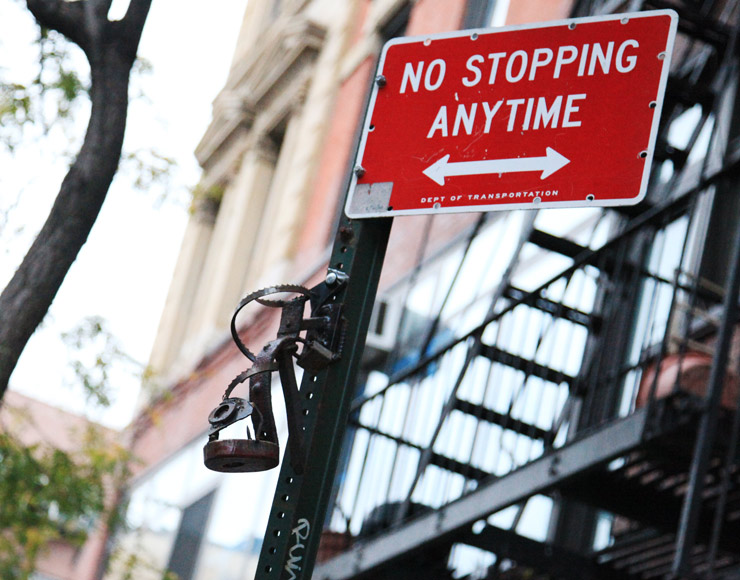 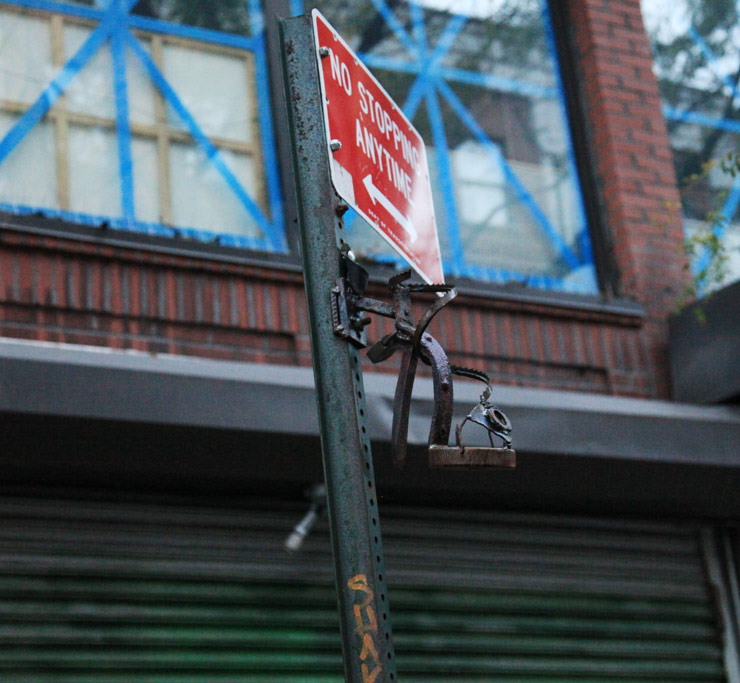 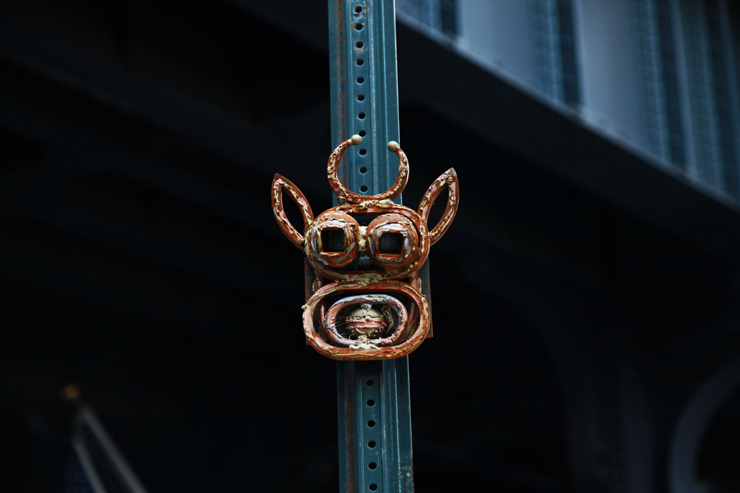 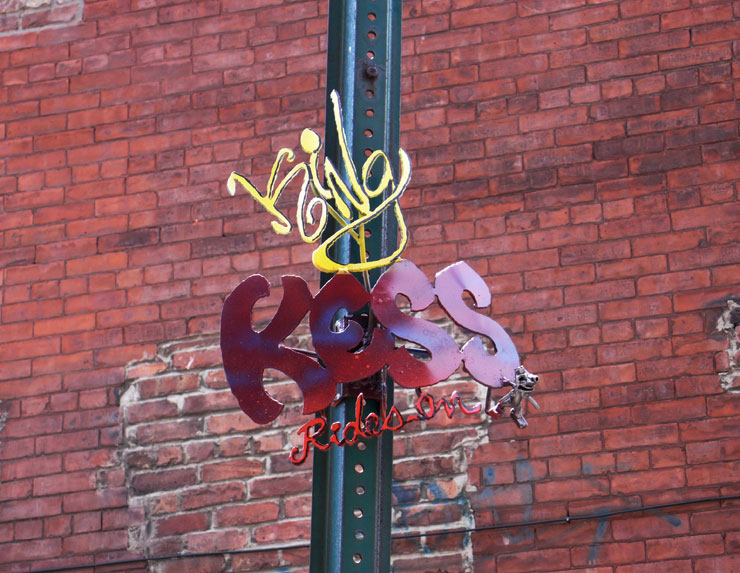 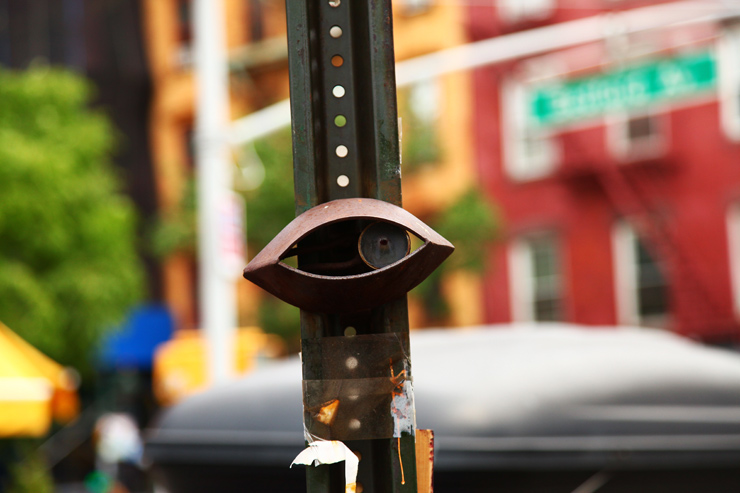 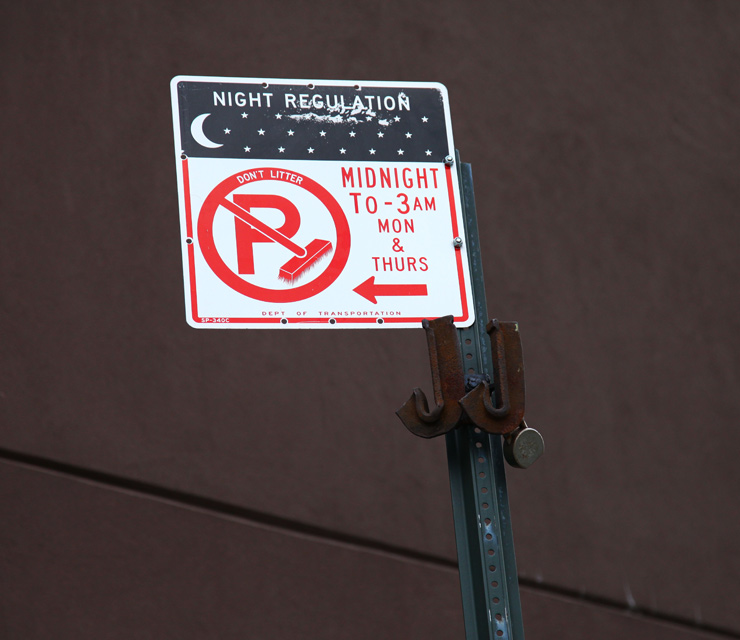 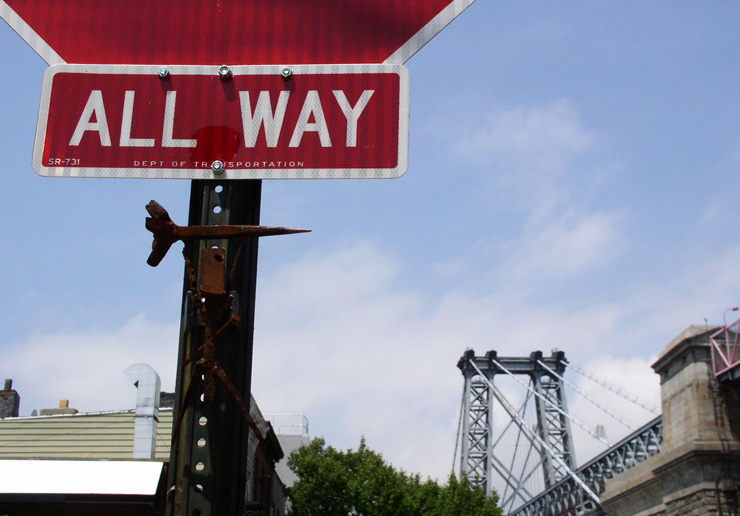 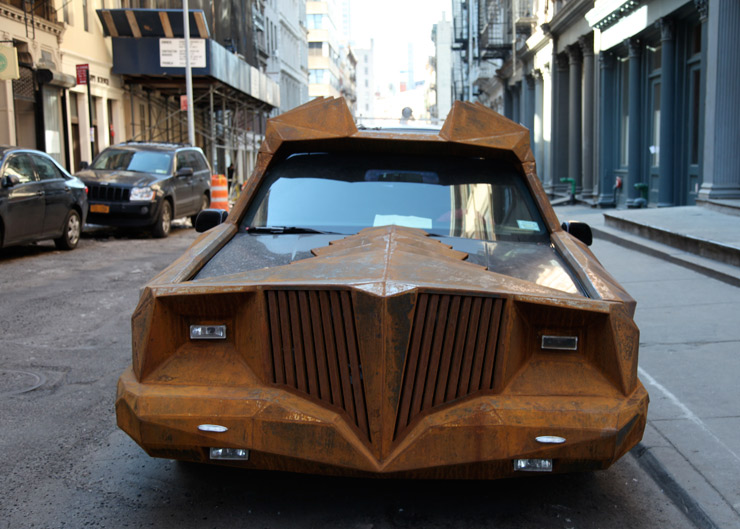 Artist Unknown. This is not technically Street Art but this iron clad limo WAS on the street.  (photo © Jaime Rojo) 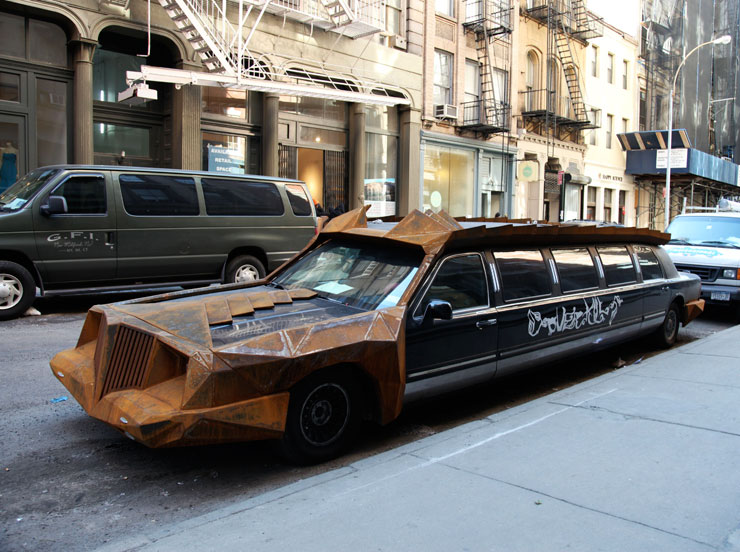 Saype in Cape Town, South Africa with "Beyond Walls"
Three frescoes in Sea Point, Cape Town, South Africa are the latest installments of hands and arms joined with one another for the French large-scale land artist Saype. Saype. "Beyond Walls" 9th ...
Kenor Paints Kinectic Geometric Confetti for Art Azoï in Paris
Barcelona-based KENOR has traveled around the world and worked with brands creating his own take on kinetic graffiti, whether on walls, on canvas, or as sculpture. Blowing air into his pieces of colo...
No Barriers Dismantle Themselves: JDL Paints "Outside In" - In Rome
Artist JDL has created an enormous split image of the same person in Rome, and the message is one of celebration and acceptance. JDL. Inside In - For the LGBT Movement. Rome. 12-2020 (photo © Bene...
BSA Images Of The Week: 05.25.14
We start this weeks collection of images from the street with a new piece in Bushwick by Joe Iurato, a New Jersey based Street Artist who also, as we learned via press release this week, has bee...
Said Dokins & Lapiztola : Gentrification in Mexico City's La Merced Market
Lapiztola & Said Dokins. Del Barrio / Mi Merced Mexico City. 2017. (photo © Leonardo Luna) The writing is on the wall. Can you read what it says?   Lapiztola & Said Dokins. Del...
Brooklyn Brooklyn Street Art Jaime Rojo JJ JJ Veronis King Kess Leon Reid IV Manhattan NYC PM AM REVS Steven P. Harrington