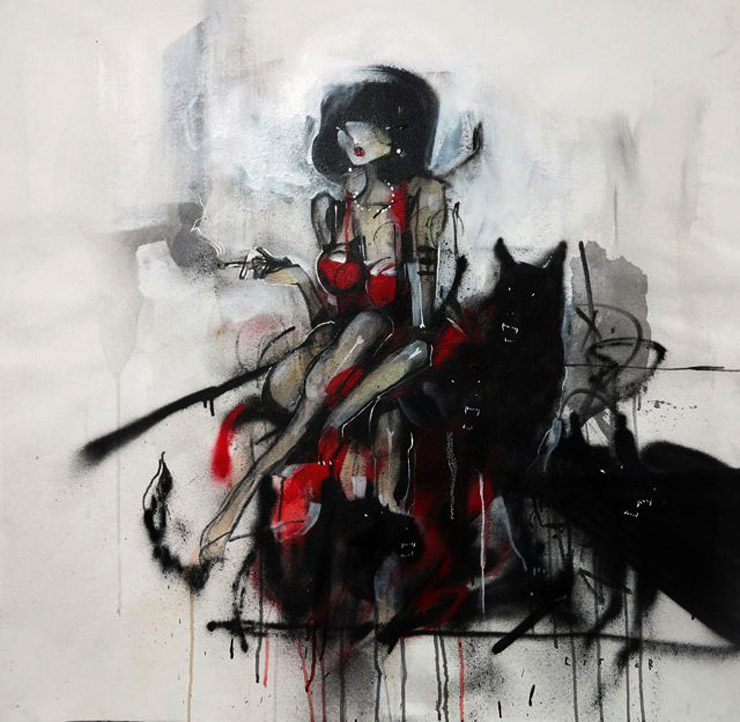 The private views will both take place from 6pm – 9pm on Thursday November 15th 2012.

To attend the London private view you must RSVP to info@theoutsiders.net with your name and that of a guest by Wednesday 14th. The Newcastle private view does not require an RSVP.

The brightest international talent emerging from street art takes over both The Outsiders galleries simultaneously this November for a tour de force exhibition, Unslung Heroes.

For his all-new show, Anthony Lister – consistently described as “Australia’s best contemporary artist” – has used his sketchbook featuring portraits of hip hedonistic revellers, drawn at revels he’s attended, for inspiration. The elegant and sophisticated figures in the paintings – also dubbed the ‘Party Life Series’ – may be a contrast to the obnoxiously intoxicated international youth of today. But this is exemplary of the artist’s most consistent theme: “I try to combine the highbrow and lowbrow,” says Lister, “creating analogies which allow the viewer to feel comfortable with subjects that maybe they’ve made snap judgements on before.”

On a surface level the content of Unslung Heroes marks a departure for Lister. The artist’s past trademark has been paintings of super-powered ‘grey paladin’ characters indulging in louche behaviour, more inclined to shoot laser beams from their sexual organs than their eyes or gauntlets. “The super-heroes I always described as ‘mis- guiding role models’. Well, the characters in Unslung Heroes are the products of those bad role models. Also this whole show is about people without super-powers who influence us. Super-heroes are just people in costumes after all.”

Red, black and white dictate the palette of the entire show. Across both galleries the exhibition features several large canvases at 180cm square and a wide range of mid- sized canvases at 90cm square. These are painted using charcoal, acrylic, spray paint and oils. The rare grey shades employ the neutral ‘buffing’ paste used to delete graffiti by local authorities, “stolen from the council out of necessity” says Lister. The canvases are supplemented by miniature drawings on lined notepaper using felt pen and Tippex correction fluid. “When I started making the sketches, red and black pens – plus Tippex, which I’ve always worked with – were all I had to hand. A lot of the time when I’m travelling I’ll be alone and I’ll have to meet people. Sketching them helps for that. Plus it stops me drawing all over the tables and walls.”

Sculptural installations made on site will provide an immersive experience, including a grand piano in the style of a Picasso painting, a statue of Lister’s great-grandfather cut from packing foam using hot wire, and a bronze bust of his errant uncle. “My references to my family are also on the theme of role models,” says Lister. “You can choose your role models but you can’t choose your family. Apparently my great-grandfather was respected and established. My uncle though, he’s not right. It’s about detachment and influence. I imagine all these people in the paintings have uncles… and great- grandfathers.”

This is the first time both Outsiders exhibition spaces have been given over to one artist since David Choe’s UK debut in 2008. Get under the influence of Anthony Lister’s intoxicating artwork at Unslung Heroes this autumn.

33 year-old Anthony Lister is hailed as the most compelling artistic talent coming out of Australia today. He has exhibited internationally to considerable acclaim, and been featured in Art Collector’s 50 Most Collectable Australian Artists. His 2007 painting Spider Woman recently sold at Lawson-Menzies auction house for just under AU$20,000, a personal record.

Anthony began his artistic career painting “awful” (in his own words) graffiti graduating to abstract landscapes on electricity junction boxes. A prolific worker he exhibits several times a year, consistently at Miami’s Art Basle festival. His most recent show in his home country took over an abandoned brothel, and an eponymous show earlier in 2012 in California featured ballerinas in group sex with dingoes.

Li-Hill x Swoon x BSA : Unveiling New "Crumbling As We Climb" Print
Here is the first public look at the new print by Li-Hill which he made especially to aid Heliotrope programs in Haiti and Braddock, Pennsylvania for Swoon and Heliotrope Prints. The limited run pri...
BSA Film Friday: 06.04.21
Our weekly focus on the moving image and art in the streets. And other oddities. Now screening:1. Homily to Country by Artist JR2. Jersey City Artists at Work Painting for the first Mural Fest...
Panmela Castro In The Bronx Highlights Women's Rights
Brazilian muralist and graffiti writer Panmela “Anarkia” Castro has just begun painting four expansive walls in the Bronx and today we bring you a few images of the first one commenced in March in rec...
BSA Images Of The Week: 10.29.17
Halloween this year is on a Tuesday so its hard for people to know when exactly to celebrate it - we had 20 or so Trick-or-Treaters Saturday night so that tells you the kids vote in this part of...
A Nice Gesture: HANDS Project In Barcelona
With the international banking crises continuing to force everyday citizens to suffer, Spain is one of the more recent “developed” countries being forced to cut programs and services for its people. J...
Anthony Lister Brooklyn Street Art London Newcastle The Outsiders Gallery U.K.