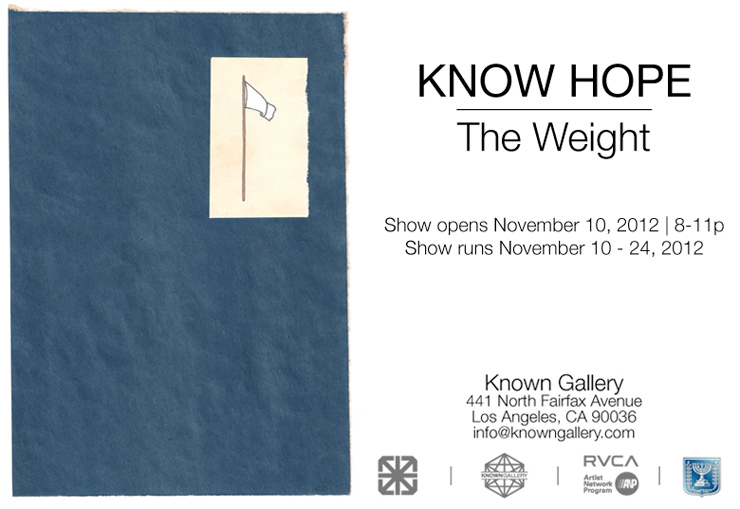 For his first solo show in Los Angeles since 2009, Know Hope continues his research and narrative, this time focusing on the notion of ‘The Weight’.

Portraying ‘The Weight’ in both a visual and symbolical nature, this exhibition observes on the various interpretations of what weighs down on us, collectively speaking.

Know Hope has recently been using the image of the flag in his work, attempting to look into the idea of patriotism-not necessarily from the directly-political aspect, but by focusing on the minor human situations that compose this larger issue.

The artist conducts this research from a standing point of aiming to understand how patriotism works; as an emotional mechanism, hoping to show the indifference between the personal and the political

Another primary concept portrayed in Know Hope’s work is the idea of ‘The Missings’, the empty spaces which he sees as a common denominator. The artist believes that there is a collective longing that exists in subjective manners (i.e. ‘a missing’, or an empty space) that we seek to fill, more specifically in this case by patriotism.

There is an emphasis on the process of adopting these ‘truisms’-being born into a charged reality and embracing these values without questioning; such as we do the flag and it’s role in our lives.

By creating a new body of work and a site-specific installation, all while keeping these things in mind, Know Hope presents ‘The Weight’, an observation on where we are now, how we got to being there, and how we manage the burdens that we bear.

Print Release Today with OBEY! Martha Remixed by Shepard Courtesy BSA and UN
Today at 10:00 AM PDT Shepard Fairey will release his newest print and collaboration with Martha Cooper, "People's Discontent". Shepard's long friendship with Martha has brought several collaboration...
OverUnder in LA and Vegas ; Faith, Family, and Gambling
OverUnder recently traveled to Las Vegas and LA to do some mural commissions for a large brand and he tells us he was having a bit of guilt for selling his soul to the devil to pay the bills. That was...
"Closed (In) for Inventory": FKDL Makes the Most of His Confinement, 10 Items at a Time
The world is slowly making movements toward the door as if to go outside and begin living again in a manner to which we had been accustomed before COVID made many of us become shut-ins. Parisian stre...
Kosbe & the Sticker Social Club Hustle a Booth at Coney Island
You want a booth at Coney so you can play a Carney? Do it yourself! Shout out to tireless creative New Yorker Kosbe and the Sticker Social Club who quickly set up shop in the Coney Art Walls compound...
BSA Film Friday: 04.01.22
Our weekly focus on the moving image and art in the streets. And other oddities. Now screening:1. ERWTJE83 turn to Spray Daily's Black Lines2. Ai Weiwei "Turandot", His Version 3. Gold Digger...
Brooklyn Street Art CA Know Hope Known Gallery Los Angeles