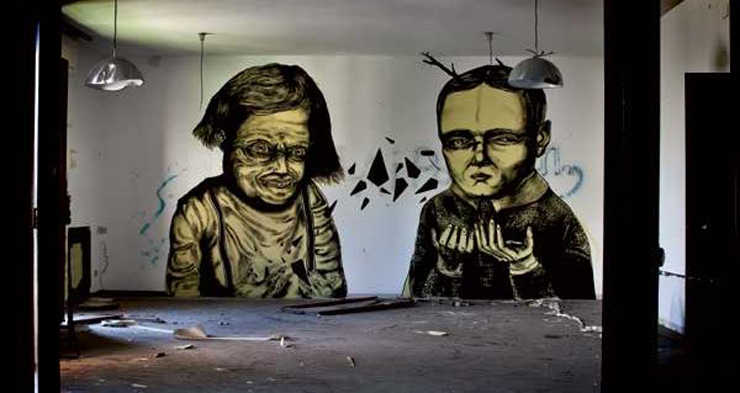 Get Up Get Down presents James Kalinda & Centina: Atroce book launch and exhibition

Get Up Get Down is delighted to present Italian artists James Kalinda and Centina for the UK launch of the photobook Atroce and their first ever exhibition on British shores.

James Kalinda and Centina are two radical urban artists reviving abandoned buildings throughout Europe with large-scale yet hidden artworks. In contrast to street art convention they consciously and selflessly seek out obscure and inhospitable locations, painting large-scale portraits that will only ever be seen by a handful of people.

Atroce is a collection of vivid and atmospheric photographs that captures not only their finished artworks but also the thrills, spills and dangers that brought them to be. In addition to chronicling the abandoned warehouses, factories, and churches that formed the canvases for this series of subversive portraits, Atroce also exposes the often eerie and bleak surroundings in which these ruins exist.

Combining the thrill of urban exploration with an inherent love for painting, Atroce provides an intriguing insight into the minds of two of Italy’s most provocative urban artists today.

For their first UK exhibition James Kalinda and Centina will present an installation of trademark portraits alongside a selection of original drawings, photographs and videos that helped to form the making of Atroce.

To celebrate its UK release the first 25 copies of the book will include an exclusive limited edition screenprint signed by the artists.
Atroce: James Kalinda & Centina published by HolyMountainBooks.

James Kalinda is a multidisciplinary artist from Parma, Italy. His art can be found on the walls of abandoned buildings across Europe, sometimes alone, sometimes in collaboration with other members of the Italian urban art fraternity. In addition to using abandoned buildings as his canvas, James Kalinda is also a sculptor, videographer and exceptional tattoo artist. He signs his work with an empty comic strip bubble.

Centina is a trained carpenter, artist and self-proclaimed art misfit from Parma, Italy. Neglecting the use of spray paint Centina prefers to use brushes and acrylics to make his dark creations, painted almost always in abandoned buildings throughout Europe. In his own words: “I love drawing in abandoned places, Godless and forgotten by those who once inhabited them.”

About Get Up Get Down

Get Up Get Down (GUGD) was founded by James Finucane and Cristian Valenti in 2012 to exhibit British and European street and contemporary artists in London. With an extensive network of European contacts and a wealth of curatorial expertise GUGD showcases some of Europe’s most exciting and engaging artistic talents through a combination of exhibitions and events across London. Above all, GUGD prides itself on representing cutting-edge artists who endeavour to push boundaries across the contemporary art spectrum.

3D Models of Murals: Opening the Street Art Experience to the Blind in Belgrade
Imagine being able to grasp a piece of street art, thanks to a 3D model of the original mounted nearby and made specifically for the blind and visually impaired. We do not recall writing about such a...
Vesod in an Oneiric State, Babes and Buildings Afloat in Santa Croce di Magliano
The dreams of men; full of adventure, longing, Doritos, cars, robots, babes. Vesod knows this all too well, as his newest wall unmoors them and sets them aflight, afloat, askance, atwitter. Stuck ins...
Esteban Del Valle and George Grosz - "Persons of Interest"
BSA is in Berlin this month to present a new show of 12 important Brooklyn Street Artists at the Urban Nation haus as part of Project M/7. PERSONS OF INTEREST brings to our sister city a diverse c...
Hyuro's BreastFeeding Mural is Not Provocative in Barcelona
The Spanish Street Artist Hyuro again features the uncovered breast of a female form in her public mural. The news here in Barcelona is that it is not news. Hyuro. BCN Transit Walls Festival. Barc...
Lady Pink Blossoms in Welling Court Mural Project NYC - 2020
Free spirit Lady Pink has sprinkled a summer bouquet across a wall here with friends in Queens for the Welling Court Mural Project this year. The Ecuadorian-American artist is known by many for her g...
Brooklyn Street Art Centina Get Up Get Down James Kalinda London U.K.