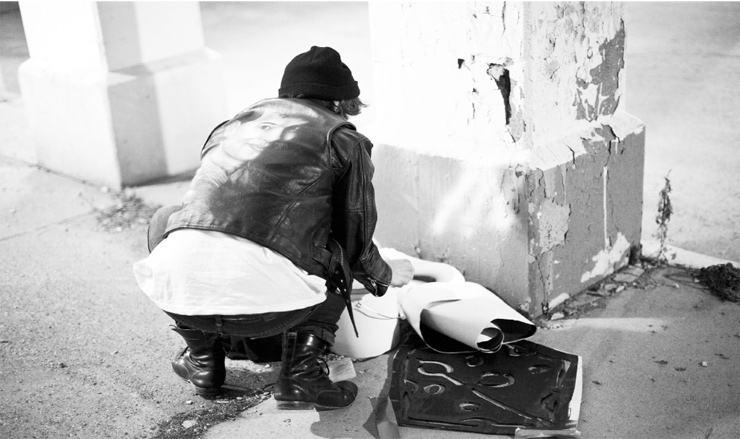 KRAUSE GALLERY is proud to present Young Puns 2 – Now With
More Pun, HANKSY’s second solo exhibition at Krause Gallery in New York. After the success of his
debut gallery exhibition in January of 2012, Hanksy has emerged on the art scene as one of the most wellknown
and beloved street artists in America. To celebrate his new wordplay series, the first 35 people in
attendance will receive a complimentary limited edition signed t-shirt. In addition to original pieces, limited
edition prints will also be available for purchase. Young Puns 2 – Now With More Pun will run concurrently
with the NYC Comedy Festival where Hanksy will be adorning several New York building facades with
puns featuring the performing comedians. With three solo shows coming in 2013 (LA, Melbourne, and
Chicago), be sure to attend the New York kickoff to see what it all really memes.

New York City based artist HANKSY uses the streets as his canvas, employing clever puns and turns of
phrases to delight fans and observant passersby.
Shortly after moving to New York in 2010, HANKSY began noticing the city’s vibrant street art scene, in
which hand painted works of art, elaborate stencils, and detailed screen prints enrich blighted spots and
capture the attention of urban dwellers. Wanting to contribute to the ever-growing movement, but
determined to maintain a light-hearted approach, HANKSY began satirizing British street art legend
Banksy by mashing up his most famous works with references from Tom Hanks films. His clever remixes
delighted New Yorkers, turning HANKSY into a social media phenomenon and quickly earning him a
place in the competitive New York street art world.
HANKSY’s new work broadens his satirical scope, lampooning pop culture icons like Bruce Willis and
Ryan Gosling, while staying true to his punny origins. With HANKSY on the streets, no celebrity is safe.