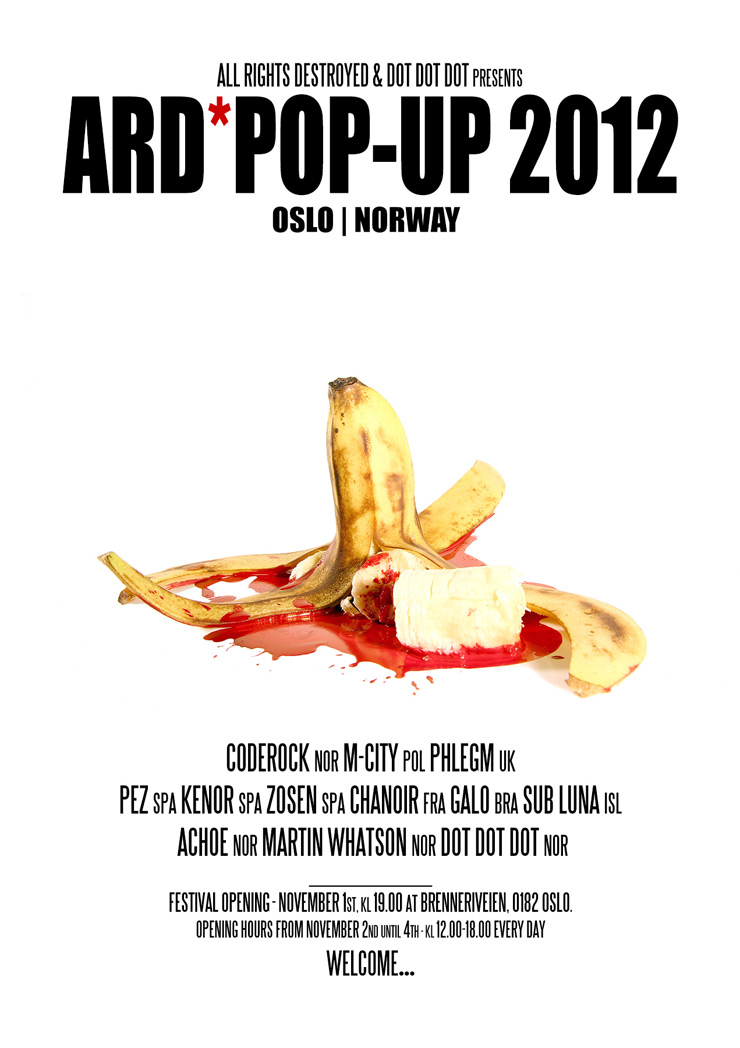 After a long way with a few stumbling moves we managed to get this show together in a couple of months.
All Rights Destroyed was founded by DOT DOT DOT and some fellow companions on May 17th, the Norwegian national day actually 😉
We are very proud to welcome all the artists and very happy that they will contribute in the show on a such short notice.
After many hours spending on mail correspondance and very hard work with partners and sponsorships we managed to get our shit together…

The line up is now complete and we are very happy to get all the artists over to Oslo in the end of October.

The festival will open November 1st at 7PM and last until November 4th.
So just drop by when you have the chance around the start of November, and maybe you are lucky to see some of them paint live under the festival…

Global Gallery will exhibit artwork from some of the artists at “Ingensteds”, a small urban “gallery” down by the river Akers Elva, right by the wall pieces…

The doors will open November 1st at 7PM and last until November 4th at Ingensteds, Brenneriveien 9, 0182 OSLO.

Stay tuned for more updates from the artists and the show at http://www.allrightsdestroyed.com

"Wet Paint" : TayOne for Contorno Urbano 12 + 1 says "Acabat de pintar"
Don’t lean against that! You’ll get paint on your shirt! Acabat de pintar. Tayone. "Wet Paint". Contorno Urbano. Project 12 + 1. Sant Feliu, Barcelona. April 2018. (photo © Alex Miró) In an i...
BSA Images Of The Week: 02.17.19
New York kicked Bezos out on his keester this week on Valentines Day - although Amazon will depict their withdrawal as a breakup with NYC. You should never feel bad about leaving an abusive relat...
Los ALCÁZARES in Murcia, Spain - Murals by the Mediterranean
“Los Alcazares has a population of about 16,000 inhabitants, next to the Mediterranean Sea -in fact it is on the edge of an inland sea called Mar Menor,” says photographer Luis Olive Bulbena of this r...
BSA Images Of The Week: 06.09.19
Jeez, that only took 50 years. "Stonewall Riot Apology: Police Actions Were ‘Wrong,’ Commissioner Admits", cooed the New York Times this week. Of course the NYT headline at the time focused on ho...
Never Crew Brings the Bear in Satka, Russia
Never Crew is in the Ural Mountains in Satka, Russia with a message about man’s disconnection with nature. Their murals often contain one large animal, and this time a bear takes center stage – rather...
ACHOE (NOR) All Rights Destroyed Brooklyn Street Art CHANOIR (FRA) CODEROCK (NOR) DOT DOT DOT (NOR) GALO (BRA) KENOR (SPA) M-CITY (POL) MARTIN WHATSON (NOR) Norway Oslo PEZ (SPA) PHLEGM (UK) SUB LUNA (ISL) ZOSEN(SPA)