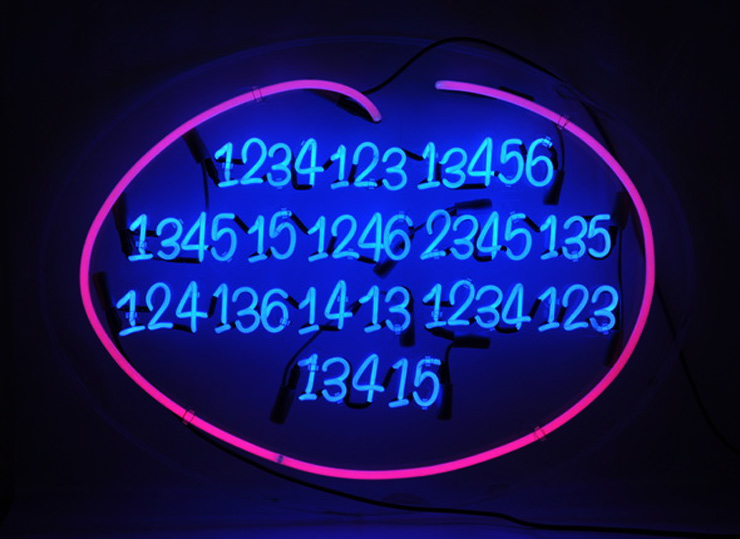 Newman Popiashvili Gallery is pleased to present the third solo exhibition of Jaye Moon entitled “Breaking the Code.” In this show Jaye Moon explores the meaning of time, privacy and visual notions in her own decoded interpretation. Moon expresses her vision by referencing the works of artists such as On Kawara, Felix Gonzalez-Torres, Tracey Emin and Damien Hirst.

Moon’s interest in patterns and numbers as a means of conveying a message can be seen in her adaptation of Damien Hirst’s spot paintings. She takes the concept of Braille, intended for the tactile sense, and asks us to experience it visually, creating a pattern. She uses Braille dots to manipulate Hirst’s spot paintings. By removing certain dots in his work, she composed a Braille sentence which reads, “Damien Hirst Spot Paintings Suck”, while at the same time keeping the original colors, maintaining the recognizable quality of the image.

From learning Braille herself, Moon discovered that it is confusing to remember the exact position of the dots. As a result she goes on to develop a more universal and exact method of communication. She explores the use of numbers and number functions as a form of writing. Her fascination with numbers lies in their universal quality and how prevalent and useful they are in our contemporary society.

This experimentation with numbers can be seen clearly in her piece where she sets two identical battery-powered clocks next to each other, referencing Felix Gonzalez-Torres’ piece“Untitled (Perfect Lovers).” Moon transforms his traditional representation of time into an abstract form by removing the actual hours of the clock and replacing them with the words “Perfect Lovers” written in English Braille number codes. Although the numbers on the clock now represent “Perfect Lovers” instead of actual time the clocks still operate as functional clocks correctly synchronized with each other.

Still exploring the concept of time, Jaye Moon references On Kawara’s date paintings. Here she connects herself with On Kawara by using the same sizes, colors and compositions of his paintings. However she replaces the numbers in his paintings that represent dates with English Braille number codes that translate into dirty words that people refrain from using in public. Again here she is removing the idea of traditional time and date and using the number system to deliver a message. She uses a universal system of communication but makes it indistinguishable by putting it in code.

Moon goes further to explore her interest in public and private notions by referencing Tracey Emin’s neon text sign piece “People Like You Need To Fuck People Like Me”. Moon recreates the Emin piece, but translates Emin’s confessional text into her English Braille number code. By doing this Moon makes Emin’s message once again private and undecipherable while keeping the statement in the form of a public neon sign.

In addition to the number coded pieces Moon also installs texts made out of lego blocks as street art. One of the texts, “I AM STILL ALIVE” by On Kawara will be shared with passerby.

In this show Jaye Moon is exploring the two sided nature of expressing ourselves with numbers. Using numbers to represent ourselves and to communicate can be practical but as a result our emotions become less personal. The use of numbers in Moon’s work break all the rules of her own interpretation but still maintain true meaning encoded underneath the surface. The numbers become abstract, minimal and emotional and at the same time all expressing a clear sense of humor.

Jaye Moon is a Brooklyn based artist. She received her MFA from Pratt Institute. She has previously exhibited at the DUMBO Arts Center, White Columns, Artists Space, Galeria Max Estrella in Madrid, Spain and Gallery Momo in Tokyo, Japan. In 2006 she won the Pollack Krasner Foundation Grant.
This fall she will participate in the CJ Art Studio Residency program in Korea.

BSA Film Friday: 03.15.19
Our weekly focus on the moving image and art in the streets. And other oddities. Now screening : 1. RONE Wrecks a Mansion in Melbourne2. Vegan Flava: The taste of fresh water 3. Vegan Flav...
Stop Asian Hate - Video With 6 Steps You Can Take on the Street
On a day where we are all reeling from a public display of violence this week toward a 65-year-old Asian New Yorker on her way to church, we reiterate what the street artists are telling us - "Stop A...
Nina Pandolfo in New York on a Wall for "Little Things"
In town for her solo show at Coburn Projects on the Lower East Side, Brazilian graffiti/Street Artist/fine artist Nina Pandolfo is determined to retain a childlike innocence on this wall outside of he...
Borondo and Agostino Iacurci at St+ART India 2016
St+art India is coming on strongly this year with their Delhi festival of Street Artists and related talents meeting at the Inland Container Depot (ICD) and creating works on shipping containers. A wa...
Aryz, Sake, Pibe, Ceser, Keant, Six, Japon on Riu Congost
Down by the riverside. This is where the walls are nearly reserved for these artists about 30 kilometers north of Barcelona on the Congost River (Riu Congost). Photographer Lluis Olive-Bulbena li...
Brooklyn Street Art Jaye Moon Manhattan Newman Popiashvili Gallery NYC