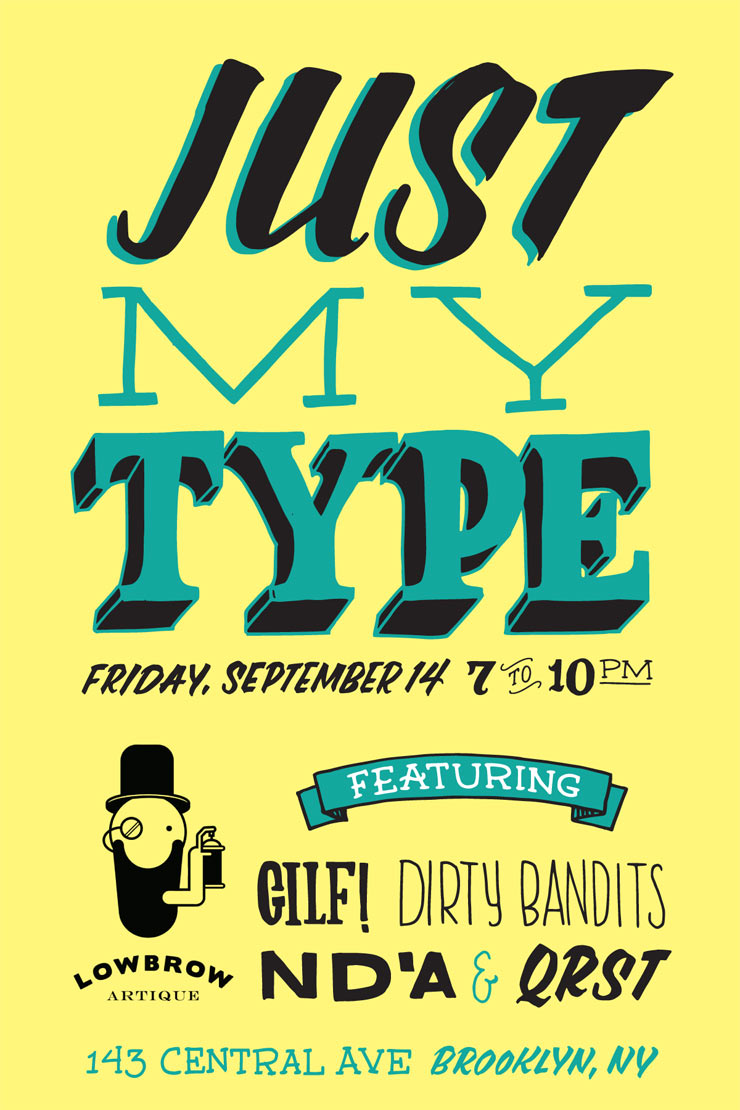 Low Brow Artique is proud to present Just My Type, which brings together four artists in a contrast of the various uses of typography. For this show, the gallery presents the work of Dirty Bandits, Gilf!, ND’A and QRST. The exhibition will be open to the public from September 14th to October 7th, with an opening reception on September 14th from 7 to 10pm.

Both being knowledgeable sign painters, ND’A and Dirty Bandits employ similar techniques when using typography in their art. Creating signs for different occasions, the Dirty Bandits employs humor combined with exceptional letterforms.  Through creating series themed around such things as ex-boyfriends and pickup lines, the artist pairs intricate and feminine type-work with a good amount of hilarity in each sign. In a similar vein, ND’A uses pop culture references and cartoon-like visuals to grab viewers’ attention as well as give them a good laugh. Known for his love of 1950’s music and comics as well as contemporary rap, the artist provides a wide range of visual and textual influences for his viewers.

In addition to providing humor, typography can also be used to convey a serious set of ideologies or beliefs.  For QRST, the banners integrated into his pieces typically carry a simple message of his moniker. However, occasionally, the cynicism seen in his portraiture paintings comes across through in these spaces. Using source material such as biblical quotations, the artist wants the viewer to see the world his way, with a dark, cynical bent. Carrying a similarly serious tone, Gilf! uses text to confront inequalities and promote change within society. Often, the artist subverts the manner in which viewers are traditionally accustomed to reading in order to garner their attention further. Whether it is forming the words into an eye chart or arranging them in an otherwise unusual form, issues such as equality and women’s rights remain the focal point of her pieces.

With work ranging from the self-conscious to the socially conscious, Just My Type represents the spectrum of concepts that words can be used to convey. Accompanying these ideas are a wide range of typographical styles whose details  are just as intricate as the thoughts behind them.

The Power Of Words on the Streets, A Recent Survey
Much art in the streets is often for aesthetics - whether figurative, representational, or abstract. With roots in graffiti and often influenced by advertising, political protest, and pop culture, you...
BSA Images Of The Week: 06.24.18
As upbeat as celebrations like today’s LGBTQ Pride events are here in NYC, they are rooted in defiance of the suffocating unjust norms that entrapped people in this city and across the country f...
Etnik Splashes a Watery Icosahedron in Jacksonville, Florida
“If you look on the map, Florida is like Italy, all surrounded by water,” says Etnik as he finishes this new spatial composition of geometrical forms. “Ocean, river, fishes and everything that is in t...
Doug Gillen Writes: Ernest Zacharevic Is Sending An "SOS"
SOS ! The Earth is increasingly sending out this message. And increasingly artists are answering the call As we near the end of 2018 we feel indebted to Street Artist / fine artist/ activist Ernest Za...
Parees Festival Marks 3rd Edition in Oviedo, Spain.
The color palette of the new collection of murals at the 3rd edition of Parees Festival is softened, earthen, stable. Adding five new murals brings the total to 23 here in Oviedo The 3rd edition of P...
Brooklyn Brooklyn Street Art Dirty Bandits Gilf Low Brow Artique Gallery ND'A NYC QRST