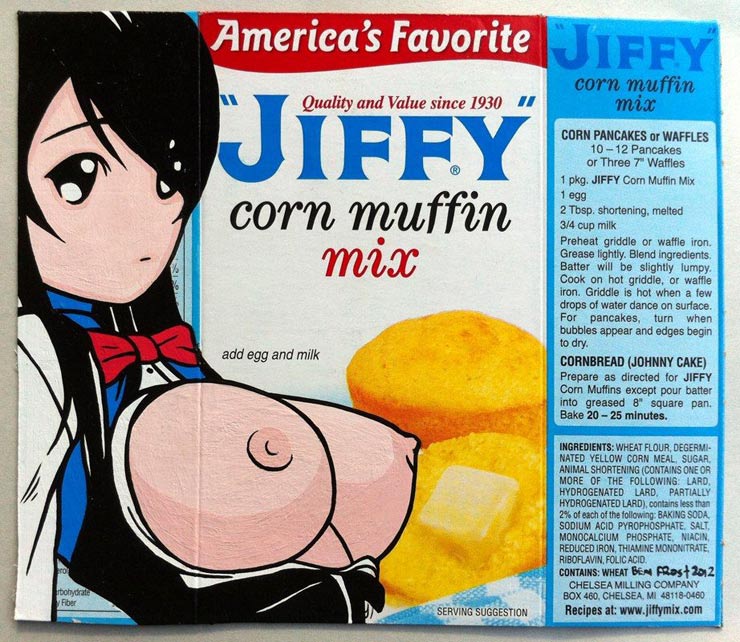 The exhibition is free and will be open to the public for viewing through September 29th, 2012.

packaging, such as pharmaceutical boxes, candy and cereal packaging.

The controversial painter and street artist will be showcasing a unique body of work,

critiquing our media-obsessed society and our loss of innocence through advertising.

them in startling and often confronting new ways.

“See Inside Box for Details,” aims to re-evaluate our understanding of product

capitalism and consumerism with striking compositions that present a chaotic look at a seedy nature underlining pop culture, presenting sex and violence in a glamorous role. Most unnerving of all is that that on first glance the work of Ben Frost may seem innocuous, filled with the bright palette and playful characters of childhood cartoons and sugary cereals.

With a series of paintings placed on found pharmaceutical and food packaging, Frost highlights the disingenuous

optimism of advertising. The innocence of familiar cartoon forms overlain on stark boxes of prescriptions pills like Morphine and Botox opens a discourse on the proliferation of prescriptions in modern culture and the morally-ambiguous stake pharmacology has in society’s welfare.

-processed treats to keep you content in front of the television, our pre-packaged

lifestyles are sold to us in colorful and dynamic boxes.

I’ve been using the logos and design elements of product packaging for many years,

subversive elements within what already exists as an object.

introduced to the packaging, Viagra and Cialis boxes juxtaposed with Mr. Burns, Pop

Since I began painting onto packages in 2011,

and Hot Tamales have all suggested new and twisted re-imaginings.

I source the objects from different sources, either directly off the shelves of

supermarkets, friends who are in the medical industry, trash cans and from people who

actually use the various medicines that are inside the boxes.