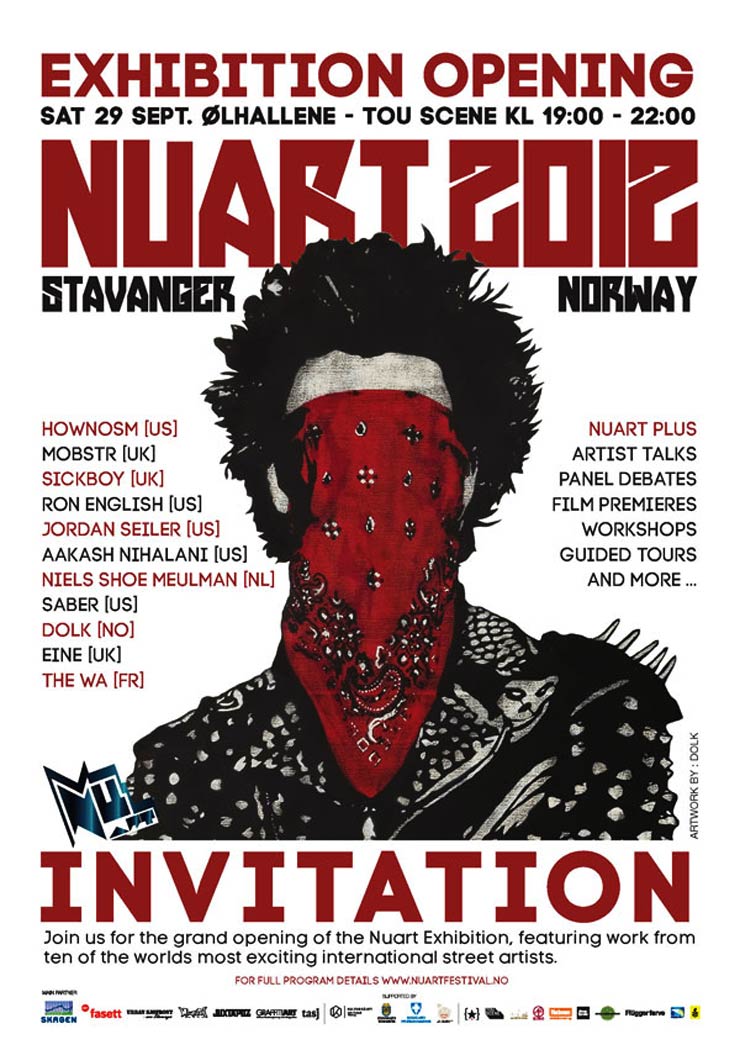 Now in its 12th ground-breaking year, Nuart 2012 – the annual contemporary street and urban art festival based in Stavanger, Norway –is set to be the biggest yet. An invited international team of street artists will take to the streets of Stavanger from September 20 – with an indoor show running at Tou Scene from 29 September to 19 November. The likes of Ron English and Ben Eine will leave their mark on the city’s walls, both indoor and out, creating one of Europe’s most dynamic and constantly evolving public art events. Known as ‘the Cannes’ festival of street art, Nuart’s works are exposed to over 100 000 people each week – including some of the most talented, insightful and connected individuals in the urban art world. 2012 sees the event set to attract record numbers as the festival begins to go global, with the additional Nuart Plus summit – running from 27-29 September – bringing global professionals and experts in the field together to discuss and explore this un-stoppable movement in contemporary art.

Fromthe billboard hijacking activism of Ron English (US) and Jordan Seiler (US) to The Wa’s (FR) playful urban interventions, from Saber’s (US) uncompromising stance on the positive power of Graffiti to Aakash Nihalani’s (US) more concise and conceptual use of coloured tape, Nuart 2012 has brought together an unlikely group of “festival” artists, whose diverse work and methods offer an authentic reflection on the real practice of Street Art. The UK’s globetrotting, ‘Obama gift-giving’, Eine and LA’s HowNosm are sure to set the standard for large breathtaking murals, whilst Dolk – Norway’s finest exponent of the genre popularised by Banksy – will produce some of his iconic stencil-work. Alongside the character driven graffiti of Sickboy (UK), the calligraphiti of Amsterdam’s Niels Shoe Meulman and the text driven Mobstr (UK), Nuart is set to create an explosion of – ‘mostly legal’ –  works, both inside, and out. Nuart 2012 sees a conscious shift away from the “acceptable” face of Street Art that has become favoured by councils and municipalities around the world. Recognising that there is a danger of this vibrant culture becoming sanitised by a surfeit of oversized legal murals Nuart 2012 will continue to take to the streets in new and more illicit ways. Alongside it’s exhibition at Tou Scene – which will host over half a kilometre of works along its 19th century tunnels – outdoor landmarks and un-missable billboards will be re-envisioned as subversive pieces of striking art. And if this isn’t enough to excite you, sister festival Numusic will be providing the weekend’s entertainment, with the likes of Mad Professor, The Orb, Lindstrøm, and many more performing. Nuart is set to break more than just boundaries in 2012 – will you be there?

The private view of the newly finished works will be held on the opening night:  Saturday September 29.

Sept 29-Nov 18
Nuart Opening (Indoors). Tou Scene
Nuart once again occupies this 19th Century Brewery Complex turned arts centre nestled on the coast of the Norwegian Fjords. These seven abandoned tunnels, offer over half a kilometre of wall space, and although an indoor space, it still retains the rough and ready urban elements we’re used to. Each single tunnel, at 15 x 15 x 5 metres is larger than the cities main commercial gallery space. With a fore-hall for group works and collaborations and an interlocking tunnel measuring over 40 metres long, this vast space is ideal for experiencing the best that Street Art has to offer.

Education
This years exhibition will be open 6 days a week for 6 weeks and with regional council support, will be host to over 3000 of the city’s high school students, Nuart being favoured over the city museum to extend the students horizons. That’s right. It will be compulsory to attend.

Sept 27-
International Guest speakers include
Carlo McCormick (US), Editor of the influential Paper Magazine, author, curator and renowned cultural critic.
Tristan Manco (UK), Author of several highly respected books on Street Art, co-organiser of cans Festival and curator for Pictures on Walls
Elisa Carmichael (US), Recently listed as one of the 30 under 30 art professionals to watch by the influential artinfo, Curator and co-owner of LA’s Carmichael gallery and founder and editor of the Internationally distributed art magazine The Art Street Journal
Rj Rushmore (US). Founder and writer for one of the worlds leading Street Art blogs, Vandalog
Evan Pricco (US), Managing editor of world leading  art magazine Juxtapoz.

Nuart specialises in showcasing work born out of urban creativity; we pride ourselves on giving a voice to artists and movements that are under-represented in mainstream cultural life, though widely acclaimed internationally.

Skount and the Projected Mask of Self
Periodically it is a worthy practice to consider how many masks one wears, and why. What are you projecting? What are you concealing? Or are you simply an open book for all to read, no constructed id...
Flavita Banana & Women in a Springtime Dance
With a nod to La Danse by Henri Matisse and many human tribes’ rites of Spring, artist Falvita Banana creates her new “Juntes sumem” (add together) here on the façade of Cotxeres Borrell in Barcelona...
Summertime Swoon in New York
Come on, you know the weather has been gorgeous, New York. So many memories to make right now, rolling in the grass, rocking in a swing, chasing after a skirt, slathering up a wall with goopy wheat pa...
Images of the Week 12.12.10
Our weekly interview with the streets, this week featuring Burning Candy, Deeker, DsCreet, Earl Greyhound, Goya, Jimmy Snatch, KARMA, Kill, Nineta, Paul Richard,Plasma Slug, Shin Shin, Skewville, Te...
Hyuro: "Douce Vie" - A Tribute in Angers
A posthumous tribute today to the street artist and muralist Hyuro (Tamara Djuvocic), who passed away last November after a long battle with leukemia. Hyuro. "Douce Vie" Executed by Faith XLVII an...
AAKASH NIHALANI (US) Brooklyn Street Art Carlo McCormick Dolk (NO) Eine (UK) Elisa Carmichael Evan Pricco HOWNOSM (US) JORDAN SEILER (US) MOBSTR (UK) NIELS SHOW MEULMAN (NL) Norway Nuart Nuart 2012 RJ Rushmore RON ENGLISH (US) SABER (US) SICKBOY (UK) Stavanger THE WA (FR) Tristan Manco