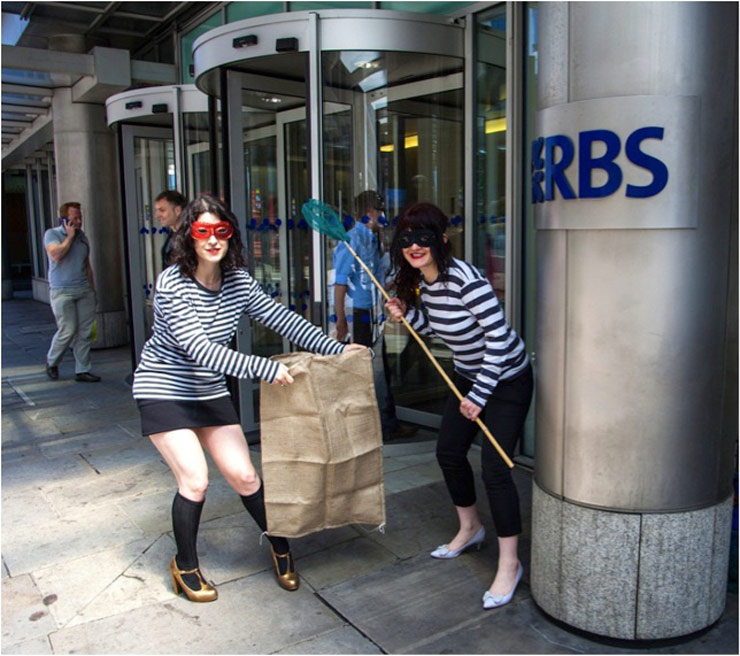 6th – 19th of July, this is the first retrospective by the art duo – Tinsel and Twinkle – and is also an amazing opportunity to see a large cross section of their work, including previously unseen pieces, and a selection from the back catalogue. This is also a chance to re visit previous art stunts – Tinsel and Twinkle as Traffic Wardens giving away free art, and the wonderfully acclaimed ‘Opinionated Objects’.  All works will be for sale including a run of limited edition prints.

Tinsel & Twinkle have chosen to present their ‘mini’ Retrospective fairly early on in their artistic careers. The works on display offer an insight into their individual artistic concerns. Social and political themes dominate the show, illustrating their quest to highlight, expose and question; bringing contemporary issues to the forefront.
Tinsel’s passionate ideology as an artist is rooted in a desire to create works which question and challenge social and political issues. Her commentary is a personal response to social injustice. Incorporating text into her paintings, the works are littered with action statements, personal mottos, questions, observations and anecdotes, reflective of her earnest approach to dealing with serious concerns.
Twinkle’s work has been inspired by social political issues in Britain both now and as it existed decades and centuries ago. Recently her work has become more universal in it’s consideration. Often satirical and usually political, the content carries dark undertones and attempts to shine a light on where the Human condition repeatedly remains in the dark.
For more information or to RSVP to the Private View contact Stephanie at twinkleandtinsel@aol.com
Private View: 7.30-9.30pm Thursday July 5th.
Exhibition: 6th –  19th July
Venue: A-side B-side Gallery, Hackney Downs Studios, 5-9 Amhurst Terrace, Hackney LONDON E8 2BT
Gallery Hours: Thursday – Sunday 12-6pm or by appointment.
Nearest Tube: Dalston Kingsland Overground
Entry: Free

Jaime Rojo and His Glimmering Series “The Last Picture”
The fog rolls in and your city gently disappears into it. A young man tenderly clings to his lover under a bridge, or is he strangling her? You are studying the secret and slow language of moving co...
Coffee Break in a Garbage Can with Etam Cru in Rome
Poland’s Bezt and Sainer of Etam Cru start your week with a cup of coffee and this wall completed during late October in Rome. The soaring mural features the illustration style and palette that has di...
Artmossphere Dispatch 3: Remi, Luka, Ito and the Move Toward Contemporary
This week BSA is in Moscow with you and Urban Nation for Artmossphere 2016, the 2nd Street Art Biennale, a group exposition introducing 26 Russian and 42 foreign artists who were shaped by street ...
Le Rat Has Arrived, Police Remove Cars from "Art Mile", 2 Days to "Unstoppable" in Berlin : BSA Disp...
Blek Le Rat arrived at the Urban Nation office today with his wife Sybille after a long car ride from Paris, ready for a coffee and possibly to take a look at the wall he’ll be painting here to cele...
NRNY Mural Program with "Street Art For Mankind" in New Rochelle, NY
An hour north of New York City in the wealthiest county of the state, a new mural program extends the reach of organizers Audrey and Thibault Decker of Street Art for Mankind. They say that they have...
A-Side B-Side Gallery Brooklyn Street Art London Tinsel & Twinkle U.K.