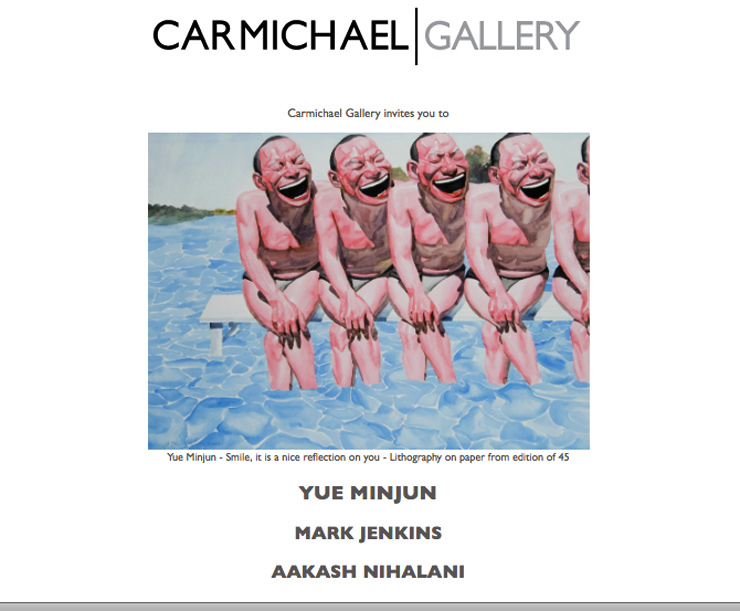 Carmichael Gallery is pleased to announce an exhibition of limited edition works on paper from the series SMILE-ISMS by Yue Minjun and sculpture by Mark Jenkins and Aakash Nihalani. The exhibition will be on view from May 26 through June 30, 2012, with an opening reception on Saturday, May 26, 2012 from 6-9pm.

Born in 1962 in Daqing, Heilongjiang Province, Yue Minjun’s most recent solo exhibitions include Yue Minjun at AroS Aarhus Kunstmuseum, Aarhus, 2011, The Spirit Scenes from Time Past at Shanghai Gallery of Art, Three on the Bund, Shanghai, 2010, Archeological Discovery in AD 3009 at Today Art Museum, Beijing, 2009, The Grassland Series at Pace Prints, New York, 2008 and Yue Minjun at the Queens Museum of Art, New York, 2007, his first solo museum show in the United States. His work is currently featured in World Beats: Global Contemporary Art, on view at The Minneapolis Institute of Arts, Minneapolis through July, 2012.

Born in 1986 in Queens, NY, Aakash Nihalani has presented solo booths at the 2012 editions of both VOLTA NY and ART HK. The past year has also seen him lend his distinctive aesthetic to a number of creative corporate projects; recent partnerships include the design of transformative installations for Facebook’s New York offices, Colette in Paris and West Elm and Hudson Jeans’ pop-up boutiques in Georgetown and New York, respectively. He is currently one of three featured talents in LACOSTE L!VE’s widely promoted S/S 2012 campaign.

BSA Film Friday: 06.29.18
Our weekly focus on the moving image and art in the streets. And other oddities. Now screening : 1. Banksy in Paris 2. Art Meet Milk III - Zeso - Carl Kenz 3. UDANE: 12 + 1 Project. 4. Beyond...
"The Art Of Writing Your Name" Expands Potential for Both Art & Writing
Niels Shoe Meulman on the cover of The Art Of Writing Your Name by Patrick Hartl & Christian Hundertmark. Publikat Verlags. Mainaschaff, Germany, 2017. “Writing”, as in the graffiti sense of th...
"The Art Of Protest" Opens Today; A Heritage of Creative Dissent Traced
Director Colin M. Day is probably having a riotous one right now because his new film debuts on Rolling Stone today; as The Art of Protest takes you through a landscape of dissent and resistance ...
New Faile on the Street / Dispatch From Isolation # 72
Part of the ongoing drama that your life becomes as someone who knows street art is you never feel like you are alone on the street. The appearance of a tag or an artwork reminds of you people and it...
“Castleman Tour” Leaves the Station, Hitting Madrid, Barcelona, Valencia, more
Official kick-of for release of the book "Get up again: Forty years later" by Craig Castleman Nearly Forty years after his seminal book “Getting Up: Subway Graffiti In New York” was released, ...
Aakash Nihalani Brooklyn Street Art CA Carmichael Gallery Culver City Los Angeles Mark Kenkins Yue Minjun