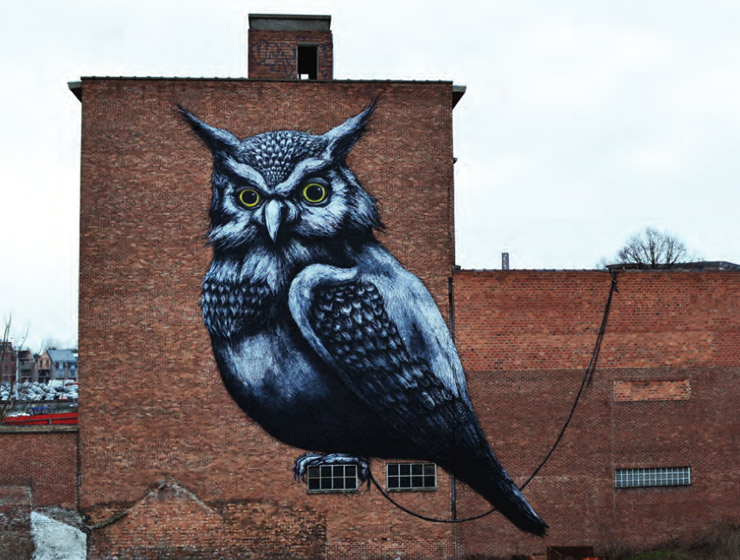 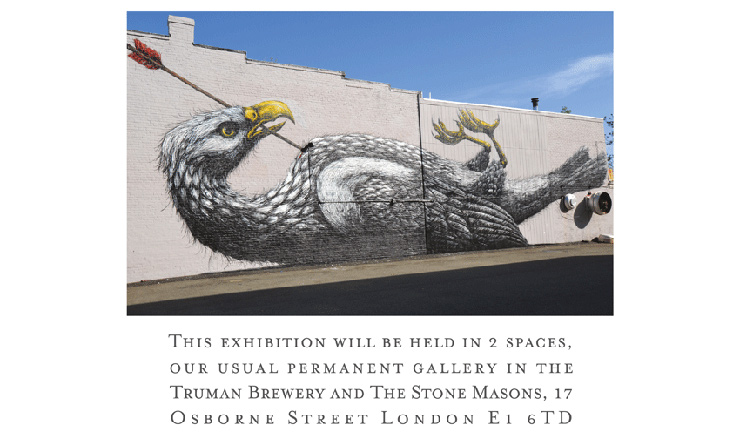 from painting animals on derelict buildings, shutters & walls literally all over the world. He has also exhibited to much acclaim all over the world and was also included in the MOCA exhibition ‘Art In The Streets’ in LA.
‘Hypnagogia’ will be a 2 space exhibition, featuring installation work & originals on found objects. As well as outdoor work across east London. To coincide with this show opening will also be the launch of ROA’s first artist book ‘Roa: An Introduction To Animal Representation’ by Mammal Press.

Etymolgically derived from the Greek words hypnos, “sleep” and agogos, “leading”, the title of the show refers to the transitional state between sleeping and awake. This grey area exists within every consciousness and is said to act as a bridge to other realities. ROA explores the ‘interstate’ with his portrayals of sleeping animals, whilst quietly around us the world awakens from a long winter, and the creatures he depicts experience a period of seasonal transition.

ROA is an artist deeply preoccupied with the significance of the creative process. Working conceptually on each project, he nurtures a dynamic energy which evolves during the restricted time-frame. His method is consistent. Arriving in a location he adapts to his habitat, allowing inspiration to flood from buildings and objects and literally ‘waking up’ to the realities surrounding him. Foraging for the recycled found-objects he seeks becomes a harder task in London, adding a new dimension and highlighting physical process and interaction in this completed body of work.

The animals themselves are represented in their purest forms, whether they be alone or in groups, sleeping or awake, half skeleton or part organ dissection. Using placement and the enlarging of subject, ROA implies the absurdity of the human attitude toward animals, as well as toward their own roots and origin. The architecture and discarded objects act as vessels for the huge creatures’ lifetimes, the realism of the images on the man-made material emphasising the tension between culture and nature. Observing the rodents occupying the cities he works in, ROA also comments on the acclimatisation of animals to the urbanised world.

ROA is both a voyeur and a commentator of the transitions he sees around him. ‘Hypnagogia’ is the exploration of a territory we often forget to enter, and both a literal and metaphorical statement of the disparity between human and animal behaviour.

Roa: An Introduction To Animal Representation by Mammal Press

This, very much hand crafted, book chronicles ROA’s art around the world by 3 recurrent themes of his murals last year; through photographs, sketches, and reference material. the book offers an insight into the creative mind of the artist. Each book is a unique edition of 500, hand bound, including two fold out screen prints of ROA, a Bird dissection and lots more…

This exhibition will be held in 2 spaces, our usual permanent gallery (space 1) in the Truman Brewery and The Stone Masons, 17 Osborne Street London E1 6TD (space 2).

BSA Images Of The Week: 07.26.15 Rochester Special
It’s not all about the murals! A sacrilegious thing to say perhaps, especially on a Sunday, especially when we are in town to see fresh new murals at the Wall\Therapy festival in Rochester. But ...
Images Of The Week: 06.08.14
Dude and Dudette it's not even officially summer (June 21) but New York streets are off in the deep end of the public pool with all these new backflips and cannonballs and arched dive art in t...
Alan KET Brings You "Urban Art Legends"
A new hard cover book by Alan Ket aka KET One will be released next month that spotlights a select group of artists from both the graffiti and Street Art scenes, people whom KET calls “Urban Art Legen...
URVANITY Marks 5th Anniversary with Solo Shows and New LAB Program in Madrid
“We're back!” Announces URVANITY, the organization that has celebrated a distinctly street-influenced flavor of New Contemporary art in Madrid for 5 years. In anticipation of their upcoming fair at t...
ROA Welcomes You to "ANNIHILATION": Show Opens and is Closed in Melbourne
Grassroots organizations like Extinction Rebellion have been battling to raise awareness and turn back the tides of disaster in our climate systems, ecological collapse, and loss of biodiversity. But...
Brooklyn Strteet Art London Roa StolenSpace Gallery U.K.