Inside out. The words capture the dynamic of an artists journey to the canvas – and the Street Artists trip to the wall. Cake, her street name, has been hitting New York streets for five years with some of her innermost dialogues; stories of love, loss, addiction, emotional turmoil. The act of painting, cutting, and wheat pasting her figurative work on decayed and battered walls bears witness to the story. The thought of what can happen to it frightens and thrills her, an experience she has referred to as therapy.

“Because it’s relinquishing control, which I have huge problem with doing in my life, so that helps me,” she explains while glancing out at the Brooklyn street below the window of her warm studio in a former factory on a recent winter day. “You put it there and then you leave it. Someone can go over it, or destroy it the next day, you know? That – I mean that would kill me when that happened. I mean I hate when that happens but it helps me – it makes it so that everything is not so precious.” 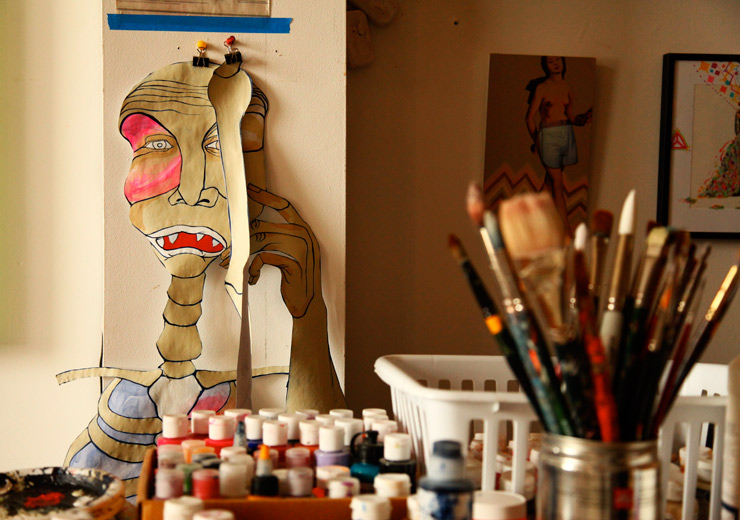 It’s all part of the game for Street Artists. You know it’s temporary but it still feels entirely necessary. The new work by Cake for her show at Brooklyn’s Mighty Tanaka this month is not far from the exposed portraits she has pasted on the street – layered and flat, stiffly lifelike, healthy and gaunt, painfully…pretty.

“These are all of my friend Emily mostly. Usually I take pictures of the models myself, because I know what I want. Instead of that, since she’s kind of an actress and an artist too, I told her to pose herself and to take the pictures herself so she wouldn’t be inhibited by my presence. And so she did… and the pictures turned out f*cking amazing.” 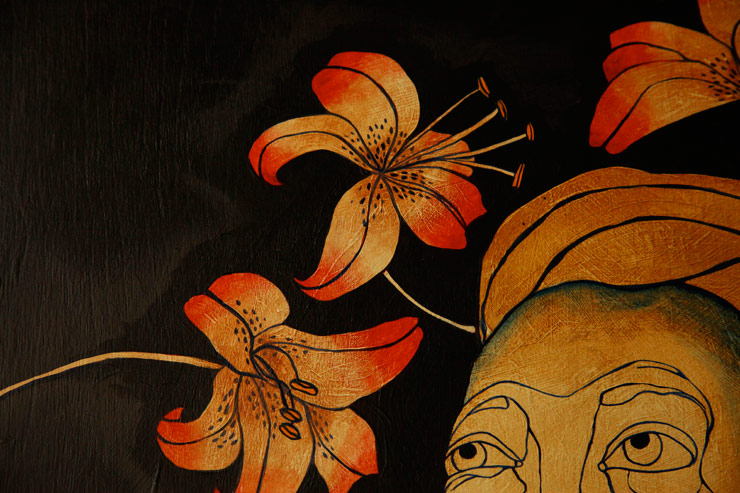 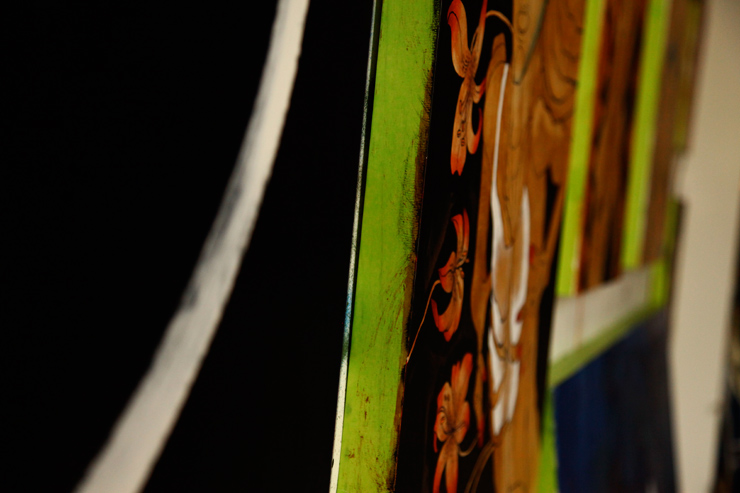 When you see the pretty torment of a Cake wheat-paste on a brick wall low to the sidewalk, the exposed raw uncomfortable nature of the portrait surrounded by graffiti tags, it can be an oasis from falseness, and a mystery. Like the 4, 5, 6 layers of paint she uses to build the canvas, these figures have more drama stirring than is obvious on the surface. Each painting is almost an unconscious act she says, and with the help of talking with others, she gradually peels back the layers of meaning, becoming conscious. One thing is evident; She’s lived this, and she’ll tell you about it when she’s ready.

BSA: When do you realize the underlying stories in your work?
Cake: Usually by talking about it, or from someone else.
BSA: So sometimes with the aid of another person
Cake: No, like a LOT of the times. Because it helps me when other people see things that I can’t see because I’m too close to it.

She explains how she coached her friend to model for the pieces. “I basically told her to think of these dramatic words, like ‘agony’. Like f*cking rip yourself apart and feel that, you know? Like I wanted to see how you look when you are experiencing that kind of reaction to life.” 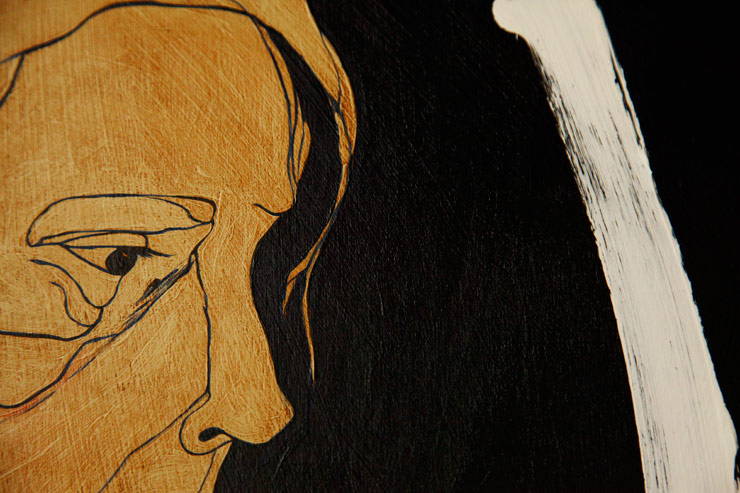 Her intensity when describing this tells you that pain is not abstract. Ironically, that is exactly how she painted before becoming a Street Artist.

“I was an abstract painter for like 13 years, in Pratt and in Parsons. I didn’t do this figurative work or Street Art. But the second I got out of Parsons in 2007 I was doing it. Because I was an abstract painter for so long… paint is like my – like I can really do f*cking sh*t with paint, just because I’m always doing it – Working with the material.

BSA: You have a deep love and regard for it.
Cake: The paint? Yeah I’ve always been like that. I’m such a f*ckin formalist that way. I’m really obsessed with the material.

BSA: So you are a trained fine artist?
Cake: Yeah, well my grandmother taught me how to paint when I was nine, because she was a fine artist. So I was always doing it.

BSA: There are many fine artists on the street now.
Cake: Yeah, that’s good, I like that.

BSA: Yeah it’s like it has changed the whole nature of Street Art.
Cake: What do you mean?
BSA: Previously in graffiti, and when it kind of morphed into what we call street art, there weren’t many art majors, or graduates, or art school kids, or whatever you want to call them. 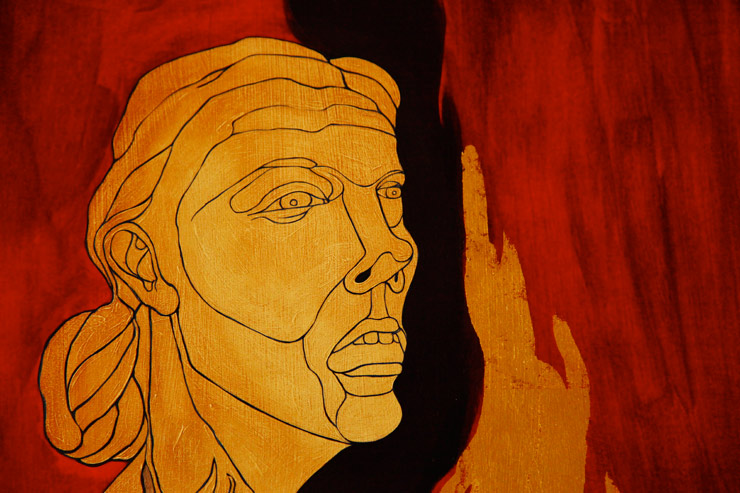 Cake: Yeah, Street Artists are art-school kids, right?
BSA: Now there are many, yes. The disciplines are many, the techniques. It’s not limited to say, aerosol art, or stickers or massed produced wheat pastes. It seems like the second half of the 2000s there started to appear more one-offs, more highly individual pieces…

Cake: Well I think that’s because there are just so many out there you really have to work harder to make something beautiful. I mean I do it for beauty. I don’t have any political stances or anything like that. Like I don’t give a sh*t about that. I probably should though, huh?
BSA: I don’t know why you should.
Cake: I don’t know. I mean you should be higher quality, that’s for sure. I don’t know. I think everything should be high quality though, like workwise. 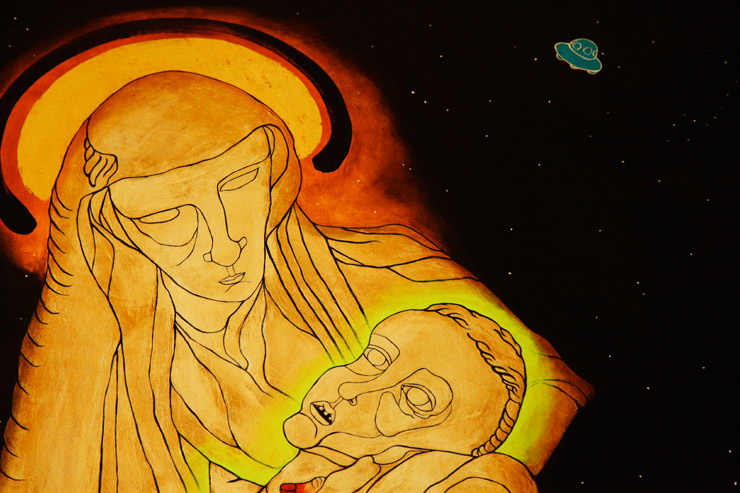 BSA: So this one is like “The Virgin Mother with Child in Outer Space”
Cake: (laughs) Oh I got this from this picture in Metro over the summer. I’ve never done this before, but I saw this picture. The thing is, do you see this? – the mother’s face, like she’s not panicking. She’s very peaceful and calm, and somehow she’s okay but she’s holding her like dying f*cking baby. I don’t know …it like hit me really hard so I just painted it. But it took me a long time. I started this picture in the summer and then I stopped working on it. And then I was able to finish it with this series. And I usually don’t take so long, I can finish a painting in a f*cking week. 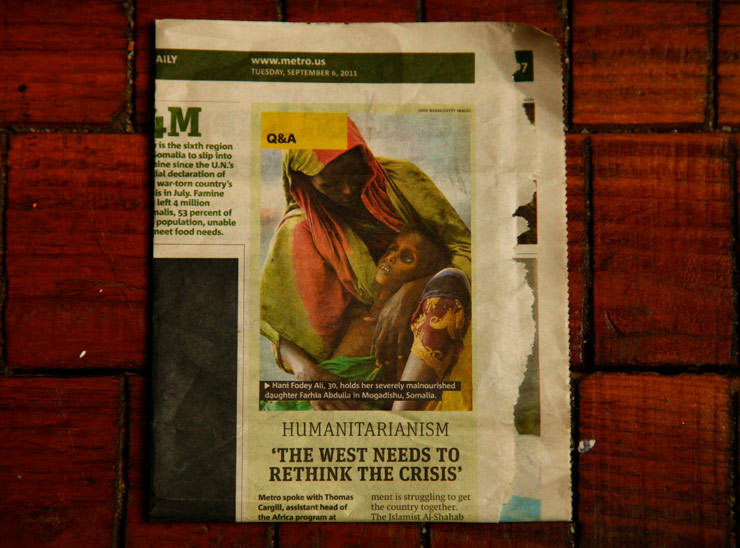 Cake. Her inspiration for the painting above. (photo © Jaime Rojo)

BSA: What stopped you?
Cake: I don’t know. I didn’t know where to put them. Then I placed them in the night sky. I was looking at all these Renaissance portraits too for this show and there were like f*cking UFOs inside of them. Did you know that?

BSA: No!
Cake: Yeah! In some Renaissance paintings you’ll see a UFO. I’m not kidding you, and it’s totally weird.

BSA: Is it like an aura, an aurora borealis?
Cake: No it’s clearly like a UFO. And in some of them there is a person in them. It’s really bizarre. It’s kind of hokey but I don’t know. It’s like this; everyone is always in wonder “the universe is so big, what does it matter?”. But look at this. This matters. Oh my God I just figured this out. That’s good. 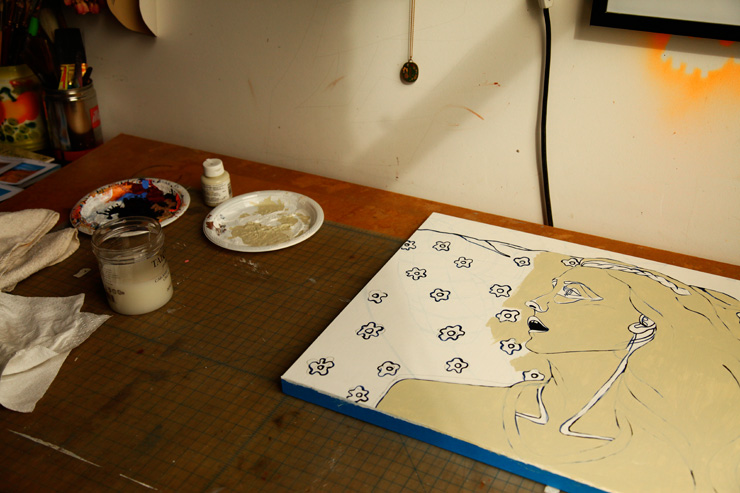 Cake. The first layer of a piece in progress. (photo © Jaime Rojo) 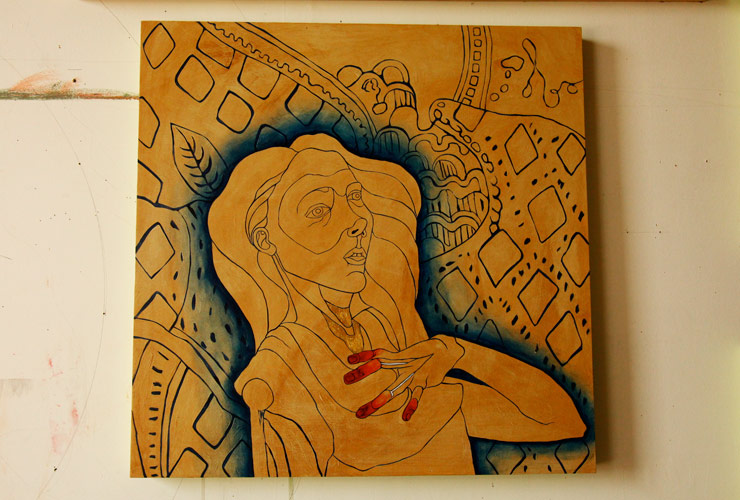 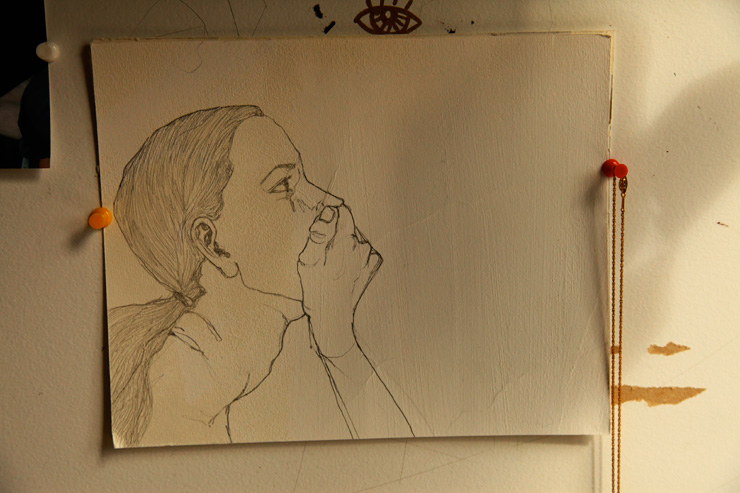 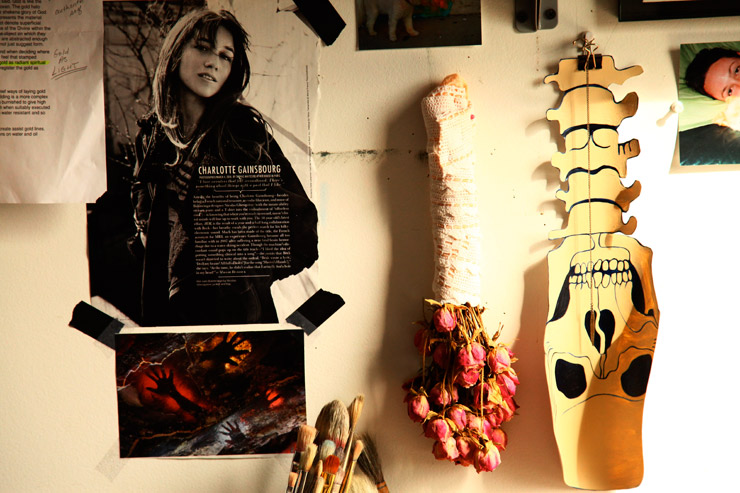 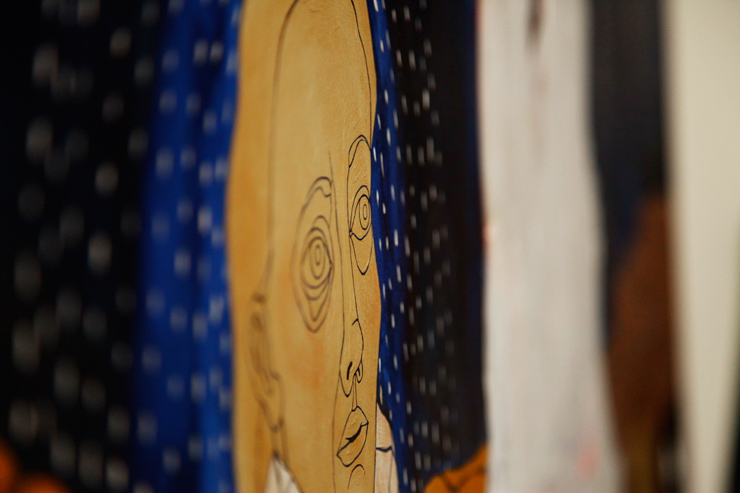 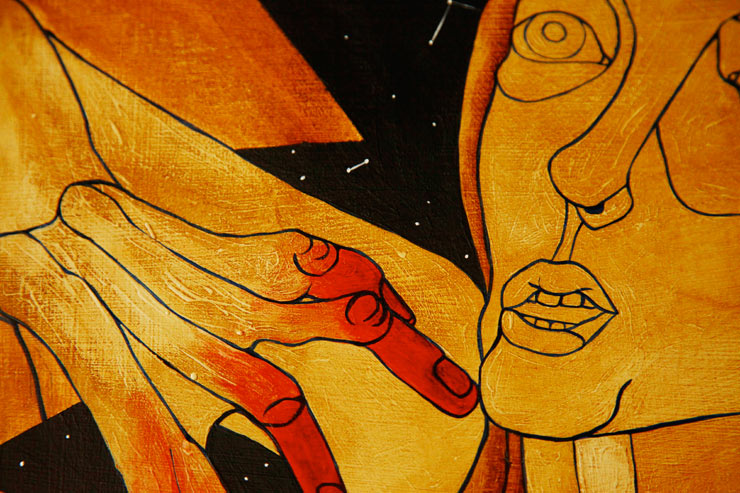 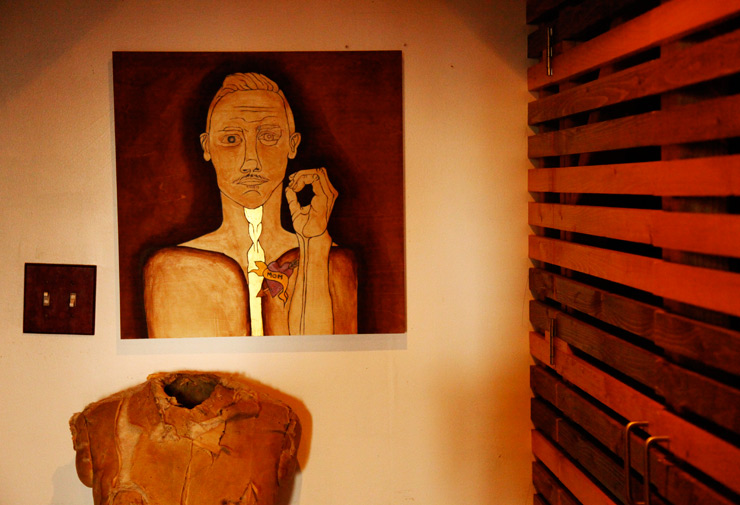 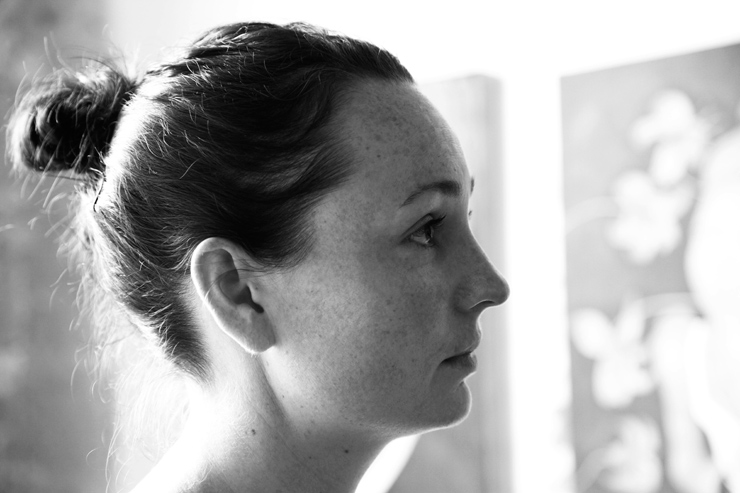 Cake and Don Pablo Pedro show “Inside Out” opens Friday February 17, 2012 at the Mighty Tanaka Gallery in DUMBO. Click here for further information regarding this show.

El Mac Brings Electricity to Creativity at Northeastern University
El Mac, the LA based aerosol Caravaggio has just illuminated a university wall in Boston with a portrait of his wife as alchemist, a glowing vision completed on the side of Northeastern’s Meserve Hall...
Pantonio Wraps a Maze for DéDalE in Morbihan, France
The blackened blueish rivers of energy swirling around this former government building in Nantes beguiles your inquisitive mind, wondering what fluid velocity and movement you have been swept into. ...
A Giant in the Street : Michael Hunter's New Installation
As a child, there are endless possibilities at play in our experimental minds, unfettered by hard realities or mere gravity. In the world of children, everyone seems like a giant. Acting upon your ow...
BSA Film Friday Special Edition: Nuart x Aberdeen x BSA
Aabody* at the club got tipsy* last night in the Anatomy Rooms, a former academic space for students at University of Aberdeen that still has random skeletons and 3-D plastic diagrams of humans cut in...
"Tracing the Scars", Know Hope: A Studio Visit At The BedStuy Art Residency
You can see the rupture, the built-up cells of swollen tissue around it, the soreness festering, never quite healing. Know Hope. Bedstuy Art Residency. Brooklyn, NY. July 27, 2019. (photo © Jaime...
Brooklyn Brooklyn Street Art Cake Jaime Rojo Mighty Tanaka Gallery NYC Steven P. Harrington