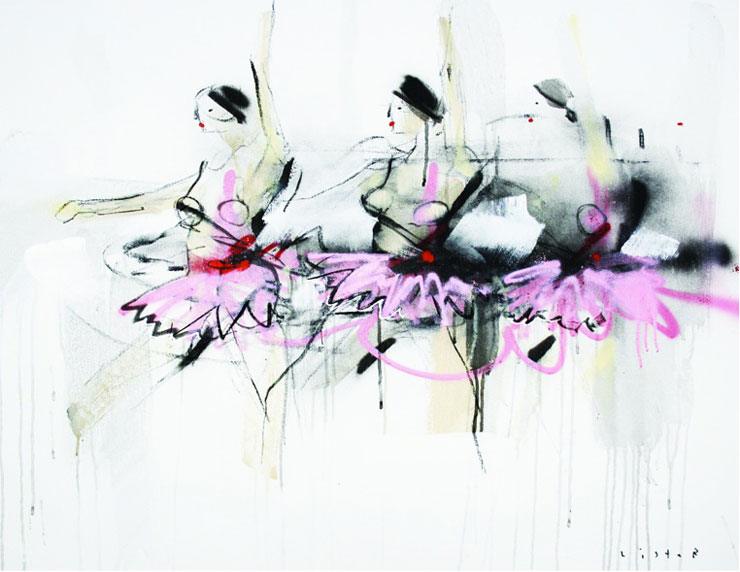 Opening Thursday, February 23, 2012, with a body of new work, New Image Art is pleased to present a new solo exhibition by returning artist Anthony Lister. Lister’s work takes influence from street art, expressionism, and pop art. Taking inspiration from his immediate surroundings he paints the parodies of modern life. His distinctive style is a visible tension between figuration and abstraction executed with bold confidence.

For his new exhibition Lister has created a montage of figurative renderings with special focus on the central theme of the beautiful and sometimes twisted form of the dancing ballerina. Along with a special print release and new series of sculptures, this new body of work promises to wow the viewer in its technical skill and refinement derived from sketching a live model. The opening reception will also feature a live dance performance as well as a hanging installation.

Born in Brisbane, Australia in 1979, Lister is a renowned painter and installation artist with an international profile. Lister graduated from Queensland College of Art in 2001, shortly after, he went to New York and worked under the mentorship of New Zealand painter Max Gimblett in 2002 and was the recipient of the 2004 Education Queensland Minister’s Art Awards, with a further mentoring workshop residency at Blender Studio, Melbourne. A selection of Lister’s work was the focus of the monograph, Twice on Sundays, published by Fox Galleries (Brisbane, AU) in 2005. Recently, he undertook a research residency in Berlin, and his travels have extended him to take part in an impressive list of sell-out solo and group exhibitions around the world. Lister’s work has been acquired by the National Gallery, featured in Juxtapoz magazine, and he was a finalist in the 2007 ABN Amro Award. In 2010 Lister was named one of the top 50 collectable artists in Australia by Australian Art Collector. He has held solo exhibitions throughout the US, Europe and Britain, straddling the boundaries of street art and the gallery world. His work has been featured in numerous publications including Forthcoming title, Wooster Collective, Taschen and Beyond the Street, 100 Leading Figures in Street Art, Gestalten.

Mr. Fijodor Builds a Burger in Athens
“The XXXL Panta Burger” You are what you eat. Mr Fijodor thinks we are eating cars, buildings, cities and a few other non-foods along with all the other stuff in this stack of hamburgers. Of course, h...
Skount Levitates From Under an Overpass
Introverts of the World Unite! Brother, its hard out here. Not just the economy and the evaporating social net and the haters. But for the introverted types, and there are many in society, just havi...
Dispatch From Isolation # 3 : A Kid in a Mask from Jilly Ballistic
Street Artist Jilly Ballistic has long favored face-masks on her black and white photo figures of yesteryear, so it interesting to see this vintage kid incognito in the current context of Coronaviru...
"Aliens, That's What They Called Them"- Molly Crabapple on the Streets
"I left all my memories in Syria, so there's nothing left to take". "Husband works in construction. Husband salary depends on luck, waits on side of the street to get picked". "Prefer by land, ...
Graffiti South Africa, The Book
Graffiti South Africa by Cale Waddacor. (photo of book cover © Jaime Rojo) A big hardcover from South Africa arrived in the mail recently and we wanted to share it with you because we think you'll ...
Anthony Lister Brooklyn Street Art CA Los Angeles New Image Art