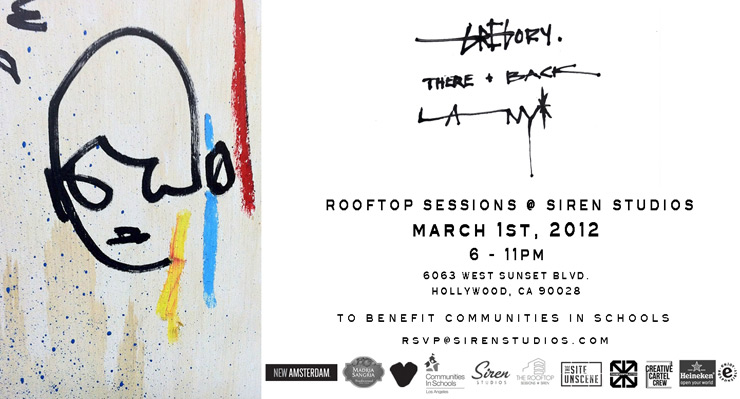 GREGORY SIFF  | THERE & BACK

RSVP must be made at rsvp@sirenstudios.com

On Thursday March 1, 2012, Siren Studios’ artist series platform; Rooftop Sessions will present Gregory Siff | There & Back. Having just come down from his first, and highly successful solo show with The Site Unscene, Gregory is back with a new body of work. In There & Back, Gregory reveals the private moments of his journey through the past two decades, exposing his range of emotions as well as those who had an impact on him along the way. Gregory’s unique technique and application of ink stains, spray, marker tags, knife etchings and poetry, visually express the maps of his reality; drawing from experience, conquest, loss and love. There & Back follows Gregory’s struggle of coping with the fracturing of a dream and the transformation to something greater once that fracture heals.

Most recently collaborating with street legend and artist Risk from The 7th Letter. Gregory has been commissioned by The Standard Hotel and The De la Barracuda Wall; has exhibited in Los Angeles, New York, London, Dublin, Italy and Vancouver; and has appeared at MOCA director Jeffrey Deitch’s Art Parade, in Andy Warhol’s Interview Magazine, Paper Mag, LA Canvas, Complex and Glamour. An exclusive Twelve Bar tee shirt, designed by Gregory, will be available the night of the show.

For There & Back, Gregory will also be collaborating on an installation with students from Communities in Schools, a non-profit organization that works within the public school system to determine student’s needs and establishes relationships with local businesses, social service agencies, health care providers, and parent and volunteer organizations to provide needed resources. Gregory is a dedicated supporter of planting success in children through the arts and will donate 10% of all proceeds from There & Back to Communities in Schools.

Siren Studios is located at 6063 W. Sunset Blvd. in Hollywood, CA. For Gregory Siff’s There & Back, Siren Studios’ Rooftop Session has teamed up with curatorial director Eli Consilvio of The Art Reserve as well as curators JB Jones and Wil Atkinson from The Site Unscene. Siren Studios created Rooftop Sessions, a periodic artist platform that extends their current contribution and support to the art scene in Los Angeles

Searching For Stikman: An Interview With The Elusive Artist
Startling Revelations With Him in the Back Yard Stikman (photo © Jaime Rojo) When the D.I.Y. movement met graffiti in the early 2000s in cities like New York, LA, Paris, Berlin, and London, it als...
Brazil's Mundano: "Operários de Brumadinho’’, Workers, and Loose Regulatory Environments / Dispatch ...
As reported this week “The Environmental Protection Agency announced a sweeping relaxation of environmental rules in response to the coronavirus pandemic, allowing power plants, factories and other f...
BSA Film Friday: 01.17.14
Our weekly focus on the moving image and art in the streets. And other oddities. Now screening : 1. Artful Ad Busting: Vermibus Melt Ads and Minds Across Europe 2. HotTea is an MN Original: Ba...
Blanco Freezes Street Art to Wall in Mongolia at -25 Degrees
New Yorkers are now complaining bitterly about the cold January weather because, well, it's our job. In a city where opinions collide into each other daily about all topics like bumper cars at...
Faring Purth & Thievin’ Stephen Bed Stuy Collabo: “Cypress, Top Wrung”
The dynamics of collaborations between artists are often informative, even revelatory to the viewers as well as the artists. By deliberately casting your creative lot with that of another you are taki...
Brooklyn Street Art CA Gregory Siff Hollywood Los Angeles Siren Studios The Site Unscene