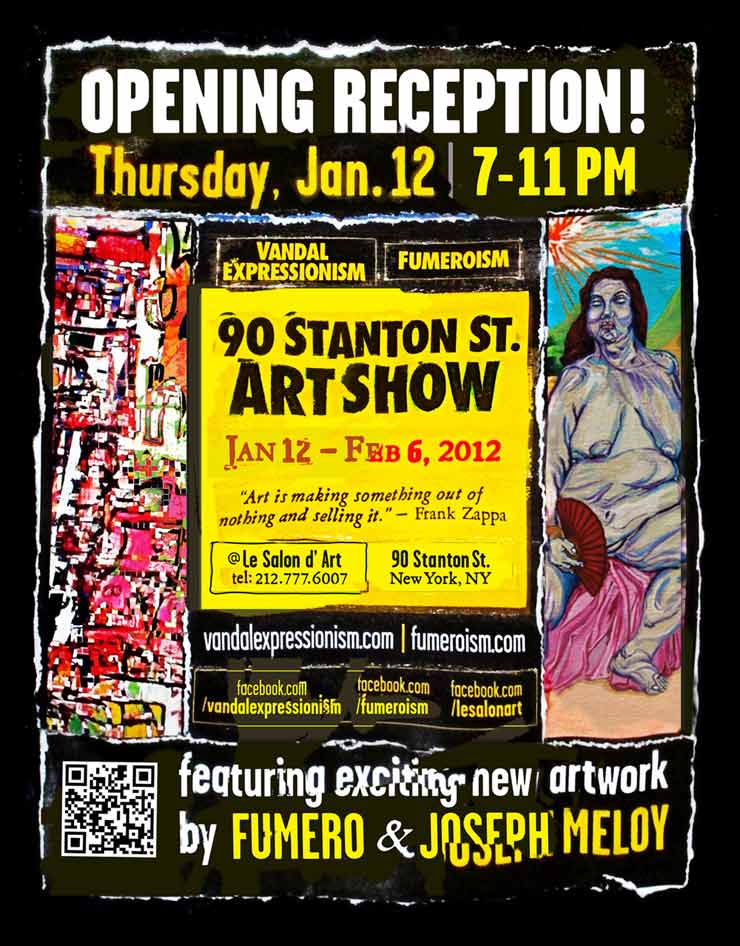 So it’s THURSDAY, JANUARY 12th and you ask yourself “What am I doing tonight? Where will I be? What is on the agenda for today?” And then you remember, “Oh right! Tonight is the opening party for the 90 STANTON STREET ART SHOW! Today is Thursday, January 12th!” A warm rush of endorphins lifts you up as you envision the idea of hanging out in the Lower East Side in an alternative gallery space on Stanton Street, surrounded by exciting urban artwork that’s never been seen before (expressive post-graffiti kind of stuff kinda exploding with colors and interesting lines and shapes and marks), and you are mingling, and you are drinking alcoholic drinks for free and having a pretty damn good time on this Thursday evening in January…This is the kind of vibe we’re talking about on January 12th at the 90 STANTON STREET ART SHOW, proudly presented by Le Salon d’Art and featuring the artwork of FUMERO and JOSEPH MELOY. 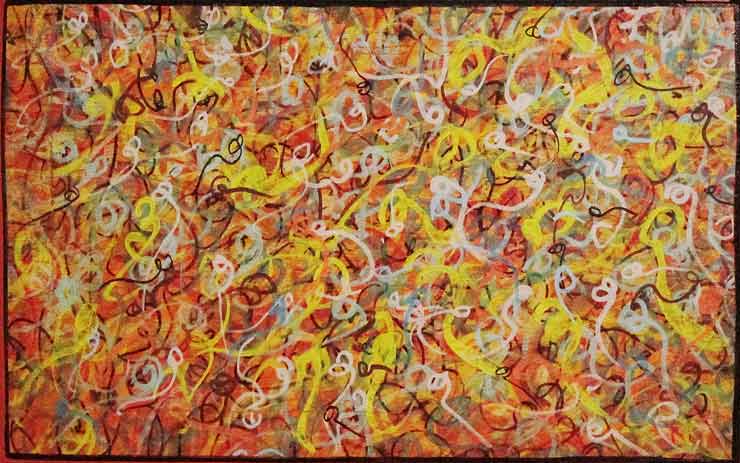 If you’re in the mood for vibrant and uniquely personalized portraiture, rendered in bold post-graffiti style and composed with the eye of a Renaissance man, then come to the show and enjoy the classy and classic-meets-modern artwork that is FUMEROISM, courtesy of fine art painter FUMERO. 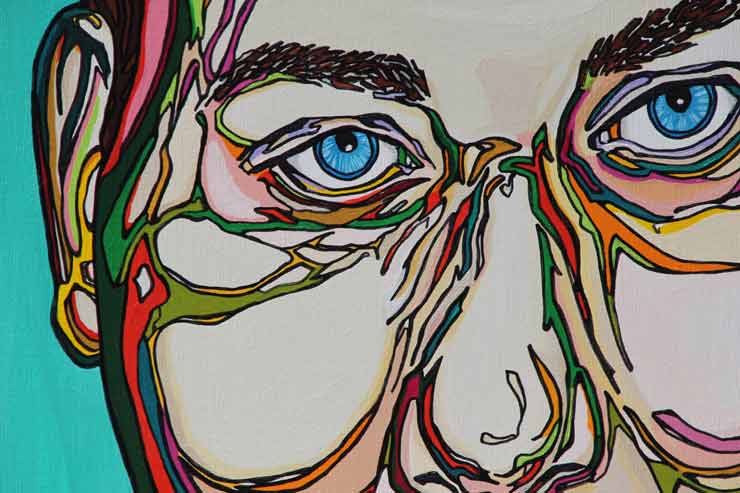 And if you enjoy futuristic cave paintings from an era that is right now, highly abstracted hieroglyphic land and cityscapes and maps and all kinds of wacked out post-graffiti-fine-art-Rorschach-Test-lookin’ goodness, then surely you will enjoy the artwork of JOSEPH MELOY and his special brand of VANDAL EXPRESSIONISM.

So come on out and have a good time and if you see something you really like, guess what, you can buy it and take it home with you so there you go. Free admission, top notch art to look at and to buy, a live DJ, uhh snacks, cool people and memories to last a lifetime! Maybe one day you’ll be telling your grandkids about how you were so cool back in the day because you were there for the opening party of the 90 STANTON STREET ART SHOW! On THURSDAY, JANUARY 12th!

BSA Images Of The Week: 09.23.18
Biggie Smalls and Alfred Hitchcock open Autumn Equinox for BSA this week and we can't help but think of that movie "The Birds" by the English film director where nature turns against man. Kiwi S...
Mr. Fijodor Builds a Burger in Athens
“The XXXL Panta Burger” You are what you eat. Mr Fijodor thinks we are eating cars, buildings, cities and a few other non-foods along with all the other stuff in this stack of hamburgers. Of course, h...
Top 15 Videos on BSA Film Friday From 2015
Every Friday you can stop by here to see a handful of videos that are directly/tangentially related to Street Art. The criterion for selection is admittedly loose so we'll just say that BSA Film Fri...
"Victoria"; Exiled Ukrainian Aleksei Bordusov, aka AEC Interesni Kazki, Opens Show in Vienna
“This show is dedicated to my home country, Ukraine, says Aleksei Bordusov, aka AEC Interesni Kazki’ from his place of exile in Spain. He’s been preparing for his show “Victoria,” which opens tomorro...
BSA Images Of The Week: 05.10.20 / Dispatch From Isolation # 49
Happy Mother's Day in the US and in Mexico too. We praise the work and the love that mothers around the world are giving today and every day, with gratitude and recognition for their shaping ...
Brooklyn Street Art Fumero Joseph Meloy.Vandal Expressionism Le Salon d'Art Manhattan NYC