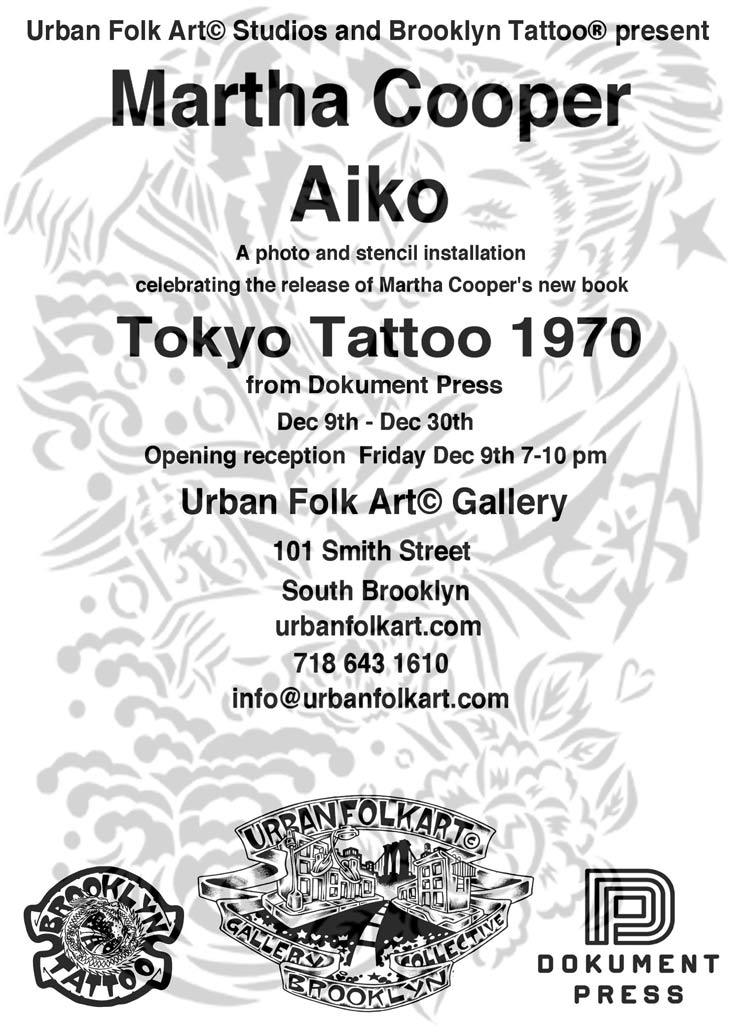 Tokyo Tattoo 1970: Martha Cooper and Aiko
Presented by Urban Folk Art©/Brooklyn Tattoo®
Date of Exhibit – Dec 9-30th  2011
Opening Friday, December 9th 7-10pm
Urban Folk Art© Gallery is pleased to present the the art installation and book release celebration for Martha Cooper’s latest book ‘Tokyo Tattoo 1970’ by Dokument Press.
Martha Cooper will be exhibiting photos from her book, and Aiko, internationally renowned stencil artist will be displaying work inspired by Martha’s work directly related to the book. Martha Cooper is an American photographer best known for documenting the New York graffiti scene in the 70’s and 80’s. She started getting noticed for her personal work while working at the NY Post in the 70’s. The landmark book Subway Art published in 1984 which Cooper co-authored with Henry Chalfant is frequently credited as the catalyst and foundation for aerosol art movements worldwide. In the 70’s She was living in Tokyo with her anthropologist husband and became interested in Japanese tattooing after seeing a tattoo on display at a festival. She documented the tattoo Master Horibun I at work on clients as well as others involved in the tattooing scene there. She tried to publish these photos in the early 70’s but found that tattoong back then had an unsavory reputation, and no one was interested.
An original member of the art collective Faile, Aiko has been making art that has been shown and recognized internationally for many years. Aiko and Martha met in 2006,  and since then have traveled to Japan, Amsterdam and Berlin together on various projects, Aiko helped install Martha’s photos at the MOCA ‘Art in the Streets’ exhibit, as well as participated in the Carmichael gallery’s show “Remix” where artists made work inspired by Martha’s photos. Aiko’s piece was inspired by one of the photos in ‘Tokyo Tattoo 1970’. www.ladyaiko.com
In 2004 Martha met the guys at Dokument Press. Their magazine ‘Underground Productions’ was one of the first graffiti magazines in Europe. In 2008 Dokument press published Cooper’s ‘Tag Town’. Martha says: “Dokument has always been interested in publishing work about underground cultures, so the tattoo photos were a good fit for them.”

On choosing Urban Folk Art© Gallery for her book release, Martha says, “Aiko and I attended the Atlantic Avenue Art Walk last year and I was surprised to see a tattoo studio (Brooklyn Tattoo) and gallery with the name ‘Urban Folk Art©’ on the event map. So first of all, the name attracted me and I wanted to see what the place was. When I found out that there was a graffiti connection, I thought it would be the perfect place to launch my tattoo book”.

Zio Ziegler: Primitive, Bizaare, Theatrically Punchy in San Francisco
Californian artist Zio Ziegler has a number of murals throughout San Francisco and Los Angeles - anthropomorphic figures and animals full of pattern, caught mid-action and almost exclusively in blac...
"Consumerism Consumes Us" Mr. Fijodor at Super Walls 2021 in Veneto, Italy
Super Walls 2021 says that the theme of this year's festival is “Rebirth” – which is in alignment with the mission of the public art project, bringing new life to Veneto, Italy with 38 urban artists ...
Kashink Uses Hairy Four-Eyed Men to Examine Gender Assumptions
The international Street Art scene boasts a small percentage of women artists and KASHINK may perplex even that statistic with her mustache. It’s the same mustache you’ll see on many of her big hairy ...
BSA Film Friday: 06.04.21
Our weekly focus on the moving image and art in the streets. And other oddities. Now screening:1. Homily to Country by Artist JR2. Jersey City Artists at Work Painting for the first Mural Fest...
Skount Levitates From Under an Overpass
Introverts of the World Unite! Brother, its hard out here. Not just the economy and the evaporating social net and the haters. But for the introverted types, and there are many in society, just havi...
Aiko Brooklyn Brooklyn Street Art Brooklyn Tattoo Martha Cooper NYC Urban Folk Art Gallery