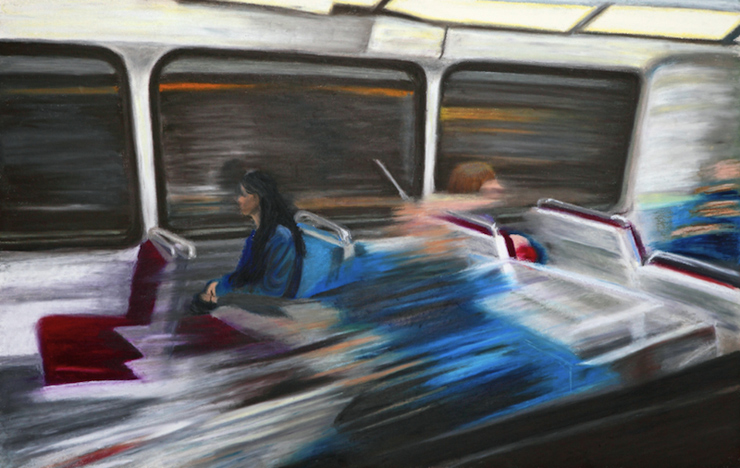 The Outsiders Newcastle invite you to join us on the evening of Thursday 20th October to celebrate the opening of ‘See Something, Say Something‘, the debut UK solo exhibition from young American artist BORF. The event takes place in the gallery at 77 Quayside, Newcastle upon Tyne, from 6 ’til 9pm.

BORF is one of the brightest young talents in art. Heʼs an angry young man in the finest tradition but his refreshing work makes insurrection delectable.

Formerly a notorious Washington DC graffiti artist, 24 year-old BORF gracefully dodges street art clichés in his gallery shows. He favours watercolours, oil sticks, drawings, sculpture, photography and film over stencils and spray paint. Whereas BORFʼs subject matter is pitiful and angry, his manner is melancholic and idealistic. Rebellion has a romance once more.

‘See Something, Say Something‘ continues the theme of impassioned revolution against a crumbling status quo. In the city we find abstracted commuters opposite transgressive kids: the former are trying to make a living, the latter trying to live.

BSA Film Friday 05.22.20 / Dispatch From Isolation # 61
Our weekly focus on the moving image and art in the streets. And other oddities. Now screening : 1. SOFLES: Layers BSA Special Feature: SOFLES: Layers Without the pomposity and subt...
Steel Gives Firepower to NEKST and Lango Sees Red in San Francisco
Here's a quick shot from Hemlock Alley in San Francisco as Steel pays an explosive tribute to Nekst and the talented tattooist Lango lets the crimson power flow like a system of veins waving like flam...
#Tag Street Art in Tel Aviv / Dispatch From Isolation # 9
Here are new pieces on street walls from the Street Artist named #Tag in Israel, who is interpreting art-world and TV icons through the lense of the current Covid-19 crises. With new pieces on the st...
BSA Images Of The Week: 10.18.15
Groovin' on a Sunday afternoon.... This week was full of great Street Art stories - the main one everyone was talking about was fake TV graffiti by the Egyptian Street Artists who hacked the prop...
Joe Iurato and "Cabin Fever" at Taglialatella
“I guess this is what happens when you can’t leave your home for a year,” says Joe Iurato. Undoubtedly that is why its called “Cabin Fever” Joe Iurato. Cabin Fever. Taglialatella Galleries NY. (ph...
Borf Brooklyn Street Art Newcastle The Outsiders Gallery U.K.