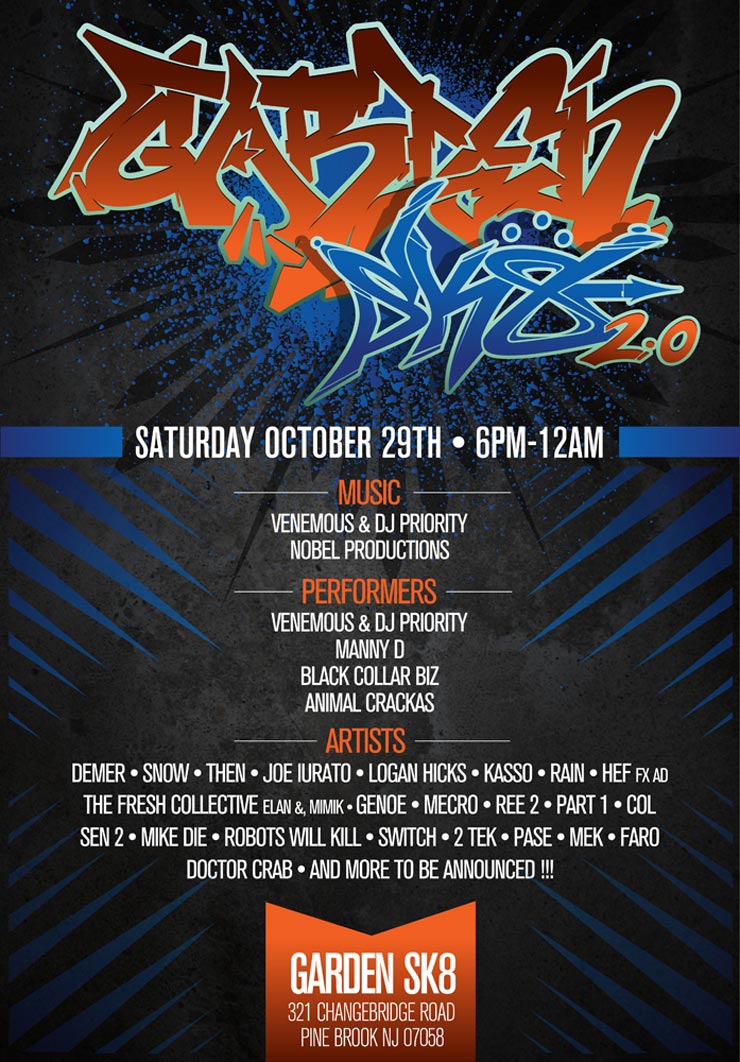 On October 29, 2011, GardenSk8 indoor skateboarding park, located at 321 Changebridge Road in Pine Brook, NJ, will open its doors for the first time after being destroyed by hurricane Irene 3 months ago.  From 6 PM to midnight, more than 20 graffiti artists from around the world will showcase their art on the walls of the park, making it the word’s largest indoor graffiti installation.

There will be a silent auction featuring graffiti art on canvas and skateboards, sign product from top professional skateboarders and other products.  All money raised will go back into rebuilding the skatepark.  The park was flooded with more than 3 feet of water during hurricane Irene destroying many of the ramps and the entire retail section.

BSA Images Of The Week: 09.14.14
The street appears in the living room when you visit some artists homes or those of hard core collectors. "Brooklyn is in da house!" suddenly takes on additional meaning. So imagine rolling thro...
NYC Subway Cars: From Rolling Canvasses to Rolling Billboards
“If I had my way, I wouldn’t put in dogs, but wolves,” New York mayor Ed Koch suggested famously as a facetious proposal for loosing ferocious animals on graffiti writers in the train yards in the ear...
Largely Geometric : Altrove '15 Delivers Abstract Murals to Catanzaro
Mural festivals are blanketing towns and cities with works that run the gamut from eye-poppingly stunning to banal and forgettable. The success of the mix is in the hands of organizers, and not surpri...
BSA Images Of The Week: 09.20.15
Great weather for hiking, tossing a football, checking out stoop sales, spray painting, and if you are an orthodox Jew in New York, building a sukkah. On the Street Art tip Shepard Fairey's new sh...
Elara Elvira Community Mural for Contorno Urbano 12 + 1 in Barcelona
Illustrator, muralist, stop-motion animator, and co-founder of FURRR Studio in Barcelona, Elara Elvira gives us “No title” for her new piece for the community mural program Project 12+1. ...
2 Tek Brooklyn Street Art Col Demer Doctor Crab Elan & MMK Faro GardenSK8 Genoe Hef fx ad Joe Iurato Kasso Logan Hicks Mek Mercro Mike Die NJ Part 1 Pase Pine Brook Rain Ree 2 Robots Will Kill Sen 2 Snow Swith The Fresh Collective Then