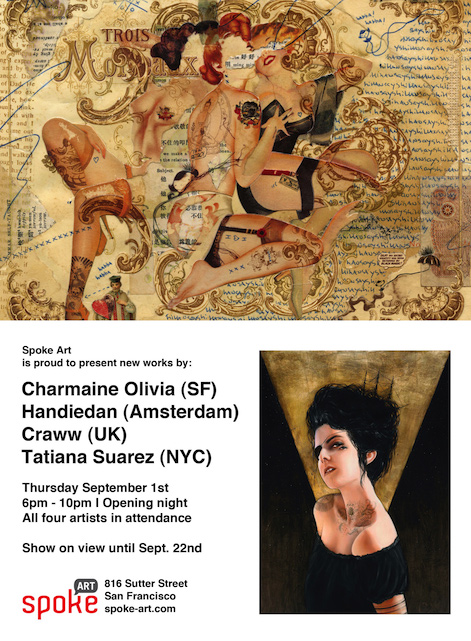 Spoke Art is pleased to present our September Group Show featuring four artists from around the world.  While there is a similar subject matter, each artist has their own individual aesthetic, form of medium and exploration of technique for representing the female figure in a substantially different way. We are excited to announce that all four artists will be in attendance.

Handiedan’s layered and intricate collages are influenced by old pin-up girl posters and movie images.  She collects found items in the streets, old buildings, flea markets, and during her travels which she then later alters to create new works.  In her artwork you can find Chinese post papers, cook book pages, old stamps, fabric, rusty nails, dried flowers, currency, and old movie posters. Charmaine Olivia’s arresting oil paintings capture sensual tattooed women.  Whether they are wearing a fox mask, a feathery headdress, or there is a ship emerging from a tangle of black hair, it is hard to pull your eyes away from these beauties.  In a recent interview she says, “As most of my paintings are some sort of reflection of me, this is me living vicariously through them.” Craww uses graphite and acrylic paints to fabricate seductively dark and fantastical women who come to him in his day-dreams.  He enjoys seeing his creations evolve into something unexpected as he paints.  He describes his work as “stream of consciousness doodlings and paintings.  Steeped in ambiguity, often melancholic and usually featuring big hands and crows.”  Tatiana Suarez is a multifaceted artist who primarily uses oils although you can also find her on the streets painting murals with a graffiti can.  Her fascination with faces and emotional facial expression inspires her to create unique and vivid portraits.  Touching on symbols and mythology from her Brazilian and El Salvadorian background, her trademark wide-eyed girls conjure other-worldly fantasy.

Handiedan, also known as Hanneke Treffers, was born in 1981 in a small town in the Netherlands.  Recently, her work has been shown at: Phone Booth Gallery (Long Beach, CA), Mondo Bizzarro Gallery (Rome, Italy), and a solo show at Unit 44 (Newcastle, UK). She now lives and works in Amsterdam.

Charmaine Olivia is a self taught artist originally from San Diego, CA.  Some of her clients and projects include: Urban Outfitters, Lady Gaga, Volcom Stone, Element, Nylon Magazine, Eyes on Walls, and Society 6. Recently she has had shows in San Francisco at Project One Gallery, Public Works, 111 Minna, Vessel (Oakland) , and C.A.V.E Gallery (Venice, CA). She is currently living in San Francisco.

Tatiana Suarez was born in 1983 and is a graduate of the University of Miami’s graphic design program.  Her work has been seen at Primary Flight, Art Basel (Miami, FL), Art Whino Gallery (MD) and our own Quentin vs. Coen show (NYC). After living in Miami, she has recently migrated to Brooklyn, NY where she is a full time artist.

Levitating Lister in Wynwood
You ever feel as if you are levitating above the sidewalk when walking through the city? It happens. Maybe you just got Tui-Na in Chinatown and your spinal column is especially stretched and tall. Ma...
BSA Images Of The Week: 02.21.16
Happy Sunday! Evidently Donald Trump is the Anti-Christ! Full disclosure, we already sort of suspected this because he is also anti-immigrant, anti-Mexican, anti-woman, anti-humility and so many o...
John Lewis Leader, Freedom Rider and Path Maker of Civil Rights Era Dies at 80
We post images from a mural in Atlanta photographed a number of years ago by Jaime Rojo, as we remember with admiration, gratitude, and respect Congressman John Lewis of Georgia. "I APPEAL TO ...
"Face Time" with Various & Gould in Berlin
80 meters from the former Berlin Wall in an area still straddling "former east" and "former west" in Berliners' minds, Street Art duo Various and Gould have just spent 12 days on “Face Time”, a patchw...
A 'New Ukraine' Sculpture in Independence Square by Roti
French Street Artist Trucks 4 Ton Marble Sculpture with Kiev Crowd Watching The Prime Minister and his cabinet have quit and the freezing crowds are still demanding the resignation of President Vikto...
Brooklyn Street Art CA Charmaine Olivia Craww Handiedan San Francisco Spoke Art Gallery Tatiana Suarez