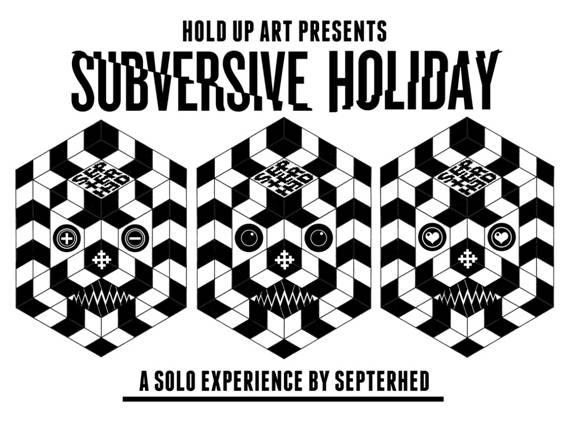 Hold Up Art is proud to present “Subversive Holiday,” the first solo exhibition for the prolific wheat paste artist Septerhed. Known for his plurality of designs and characters, Septerhed has earned a respected place in the street art circles of Los Angeles. Though his background in illustration and graphic design helped to inform his visual aesthetics, it is Septerhed’s sarcasm and sense of humor that make his images not only enjoyable, but memorable. Generally, Septerhed’s images tend to originate from a digital composition, and are reproduced through either silk-screening, or by hand with acrylic paints. “Subversive Holiday” features a closer examination of three of Septerhed’s most recognizable characters (The GEO-HEDs, Toxins and Wolves), explaining the existence and nuances of each style as a specific mode of design. The exhibition will also feature a limited edition giclee print, “Don’t Mind Me” released exclusively through Hold Up Art.

“Septerhed’s activity and anonymity on the streets was what first caught my eye. I had fallen in love with his “geo heads” long before I even knew his name; bold, bright and always stood out in a sea of pasted posters,” shares Hold Up Art curator Brian Lee. “When I finally saw a body of his work at a street art show a year ago, I was blown away by the diversity of imagery, yet it all seemed to make sense within the context of Septerhed. I’m very excited to see ‘subversive holiday’, and the reaction it draws from our audience, the work he has put into this show is inspiring.”

Although Septerhed, has been an artist his entire life, he has only become an obsessive slave to his artwork over the last 5 years. A graduate of Otis College of Art and Design, Septerhed utilized his knowledge of communication arts to create his own personal brand of visual self-politics. His work leverages the symbolism that is ever present within modern society, along with cultural associations of love and hate, and life and death. Ultimately, Septerhed’s work explores his personal struggle, and aims to represent his allergic reaction to reality and fate.

Nuart Day 1: Isaac Cordal Installs His Preoccupied Little Businessmen
Tor (@toris64) picked us up at the airport using his hand-made faux-Banksy Nuart sign, wearing his fresh Dismaland t-shirt, and we immediately knew we were home here in Stavanger. Born and raised in...
Miami Art Week Begins and Wynwood Has "Agents Of Change"
Miami awakens from a Covid-19 stupor this year with a bonified Art Week, featuring associated fairs and events like Wynwood Walls that are activated by the Art Basel behemoth. Some of the high-profil...
BSA Images Of The Week: 01.03.2021
Welcome to the first BSA Images of the Week of 2021 ! We start our collection this week with an image of Christ crucified on a Facebook logo. If this is the level of subtlety that we can expe...
Graffiti, Stencils, and Quickie Weddings: Dispatch From Asheville N.C.
"Are you the minister?" “I am not that, sir,” he answered, “I’m the vacuumer.” Our short tour ends abruptly as the loud whir of the cleaning machine rises to meet the southern-fried rock classic o...
BSA Film Friday: 08.12.16
Our weekly focus on the moving image and art in the streets. And other oddities. Now screening : 1. Brad Robson in Rural Spain 2."Inflateable Refugee" by Artist Collective Schellekens &...
Brooklyn Street Art CA Hold Up Art Gallery Los Angeles Septerhed