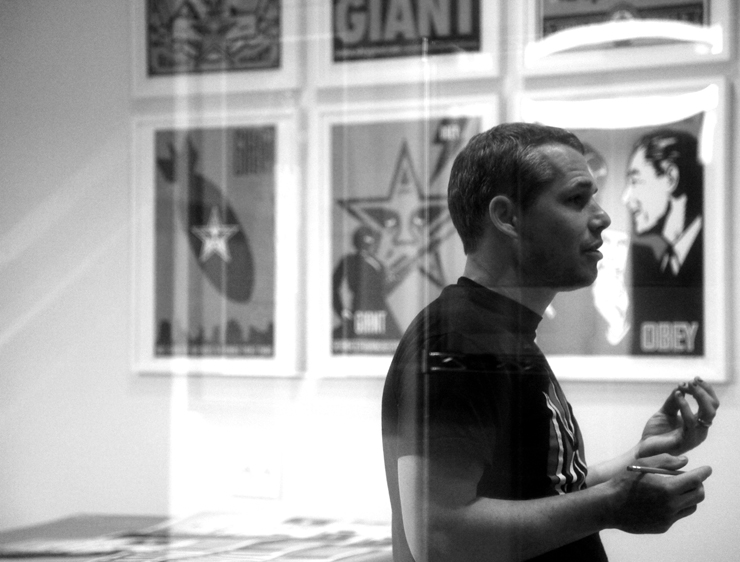 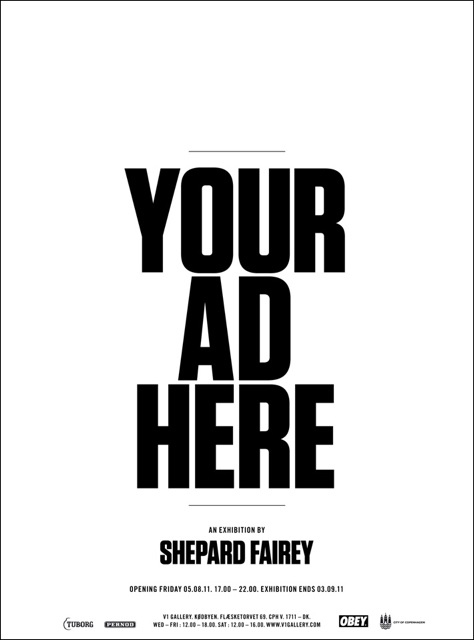 A SOLO EXHIBITION BY SHEPARD FAIREY

“Your Ad Here”, recent works by Shepard Fairey, comprises a broad array of mixed media works on canvas and paper, as well as screen prints, retired stencils, and Rubylith cuts. Building upon Fairey’s history of questioning the control of public space and public discourse, much of the art in “Your Ad Here” examines advertising and salesmanship as tools of propaganda and influence. One series in “Your Ad Here” portrays politicians like Reagan and Nixon as insincere salesmen wielding simple slogans that represent their true agendas when stripped of verbose demagoguery. Another series of works are paintings of Fairey’s Obey “Icon Face” in various urban settings usually reserved for advertising as the primary visual. These works showcase the power of images in the public space, and encourage the viewer to think of public space as more than a one-way dialogue with advertising, but as a venue for creative response. “Your Ad Here” means exactly that‚ ¨¶ not just THEIR ad here, but you can put YOUR ad here. Additionally, these cityscape paintings contextualize Fairey’s street art as an element integrated in an intentional composition. Some of the works in “Your Ad Here”, such as a group of retired spray-paint stencils demonstrate the simple and direct methods of art application that Fairey has used both in the street, and in his studio practice. All of the works in “Your Ad Here” whether they relate to advertising, politics, or music culture, celebrate art as a powerful tool of direct engagement and empowerment.

Miami Basel/Wynwood 2016 Wrap: Parade of Eye-Popping Beauty at a Portentous Time
An embarrassment of riches in so many ways, the Wynwood Street Art and mural scene is outrageously sexy, flashy, ugly, posey, pretty, proliferate and quizzically content-free. The annual outdoor urb...
Ben Eine A to Z (and then some) in Philadelphia
We are texting every day and everywhere these days. Ben Eine appears to be doing it across the entirety of South Philadelphia. Ben Eine. Mural Arts Program. Philadelphia. July 2015. (photo © St...
Lucy McLauchlan Naturally in London
Birmingham, Englands’ Lucy McLauchlin carries the patterns and textures of natural forms in her mind and her paint brushes wherever she goes. In this new mural on a pebbledash wall in London, her ong...
Specter Spot-Jocks Shepard Fairey in New York City
Ice-T is still stylin’ like an American Che Guevara, but he’s officially joined the force 19 years after “Cop Killer”. As part of a string of strikingly personalized spot-jocking intended to send s...
Headbanger Logan Hicks Brings His Posse to Celebrate a brand New Green Day
With Punk Rock Chords banging in his ears, the "workhorse" slams together two of his favorite things - Rock and Street Art - with a careful eye. He likes the dirt and the grit and diversity of New Y...
Brooklyn Street Art copenhagen Denmark Shepard Fairey V1 Gallery Copenhagen