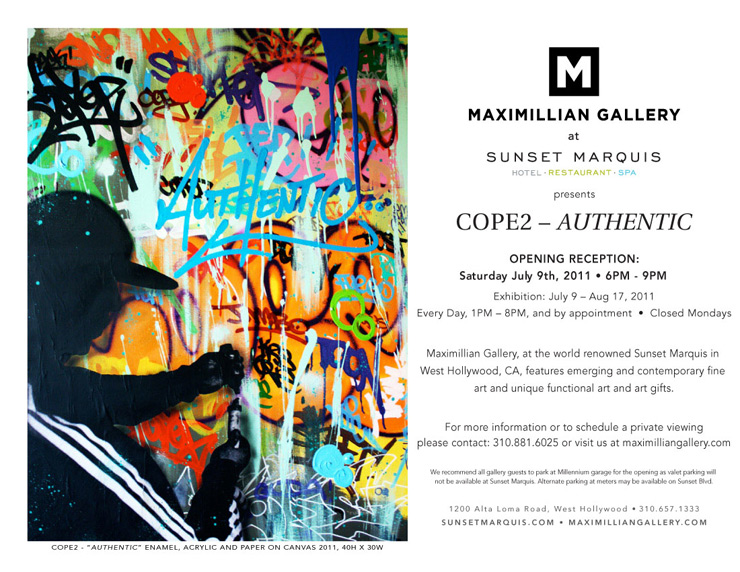 Maximillian Gallery is pleased to present COPE2 – AUTHENTIC. In his first solo exhibition in Los Angeles, California, COPE2 brings his raw energy and original graffiti art to the city of street art. This important exhibition presents current work as well as a retrospective of COPE2’s art. From his early graffiti to his iconic work on New York City Subway trains, to his latest artistic creations, this show is not to be missed. COPE2’s works in the show also include his famous graffiti New York City MTA subway maps and miniature subway trains.

COPE2 has influenced everything from other graffiti art to today’s street art and beyond. COPE2 is a worldwide celebrity and a veritable legend within the graffiti art world. Artists from all over the planet track him down in order to paint beside this master. Raised in New York in the South Bronx, COPE2 has been painting for more than thirty years on the streets, revealing his unyielding integrity as he tirelessly paints these urban labyrinths; he remains the most authentic emblematic totem of committed graffiti art.

“It’s such an honor to be working with COPE2, one of the most prolific and legendary graffiti artists of all time,” says Caradoc, Owner & Director of

Maximillian Gallery. “COPE2 is simply one of the greats. He’s a trailblazing graffiti original whose colorful, poignant, energetic art is sought after by

collectors worldwide and we are thrilled to be presenting his first solo show ever in Los Angeles.”

“Maximillian Gallery has set itself apart as a world-class art gallery in one of the greatest locations in the world, the Sunset Marquis hotel, known for rock stars and celebrities,” says COPE2. “Working with Caradoc, in this gallery in this location, on this major show, which encompasses my artistic career to date, is a true thrill for me. I’m really looking forward to this first-ever major exhibition of my work in LA.”

Resurrecting the Church with Air Sculpture by Edoardo Tresoldi
Soaring Architectural Sculpture Recalls a Long Lost Holy Place An astounding display of the volume and spatial relations defined by the built environment is now rising in Siponto, Italy thanks to the...
“RUN” on the Shores of Morocco With “Les Rives” Addresses Migration
Now appearing an eight-hour car ride south from the Strait of Gibraltar along Morocco’s coast is North Africa’s largest new mural. Given its proximity to the eight mile Africa/Europe divide, the new p...
More Pow! Wow! Hits as Picked by Martha in Hawaii (Part II)
Today we jump right in to the warm Honolulu waters for a swim before padding barefoot up to the painted walls of Pow! Wow! where photographer Martha Cooper is waiting camera in hand and looking for a ...
13 from 2013 : Martha Cooper "A Train Runs Through Mandela's Kliptown"
Happy Holidays to all you stupendous and talented and charming BSA readers! We thank you from the bottom of our socks for your support this year. The best way we can think of to celebrate and comm...
Cbloxx & Proud Peacock Marches With Leeds United
These stormy spring days are full of dark clouds, so it’s time to brighten things up with ‘The Peacock’ mural in Leeds city center celebrating Marching Out Together. Even in these photos furnished by...
Brooklyn Street Art CA Cope2 Los Angeles Maximillian Gallery