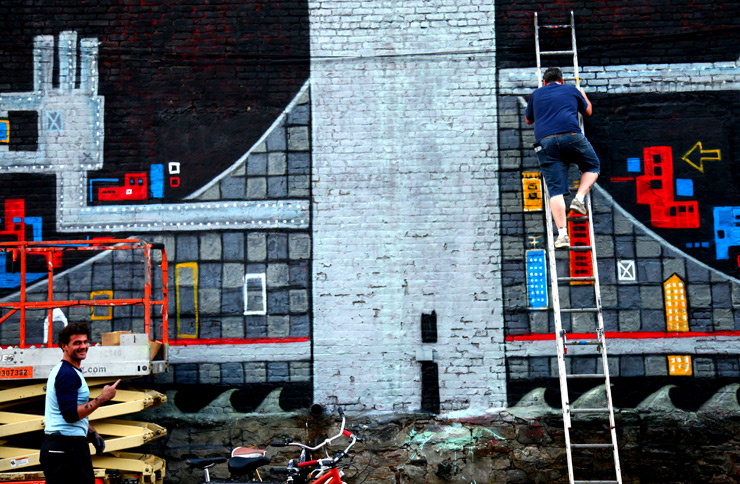 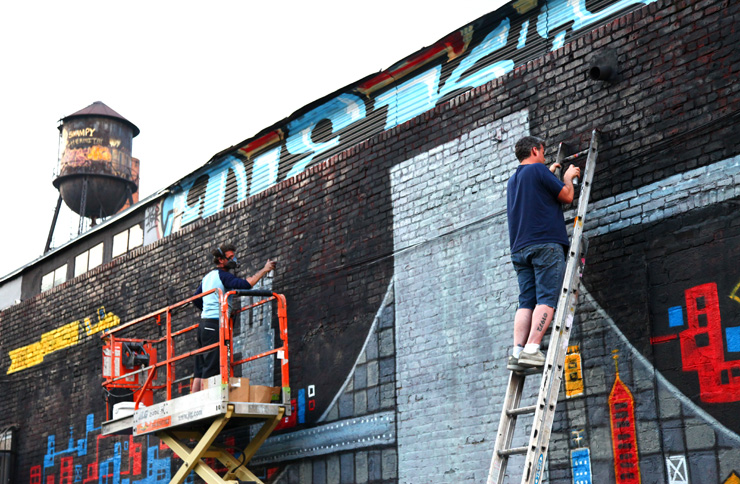 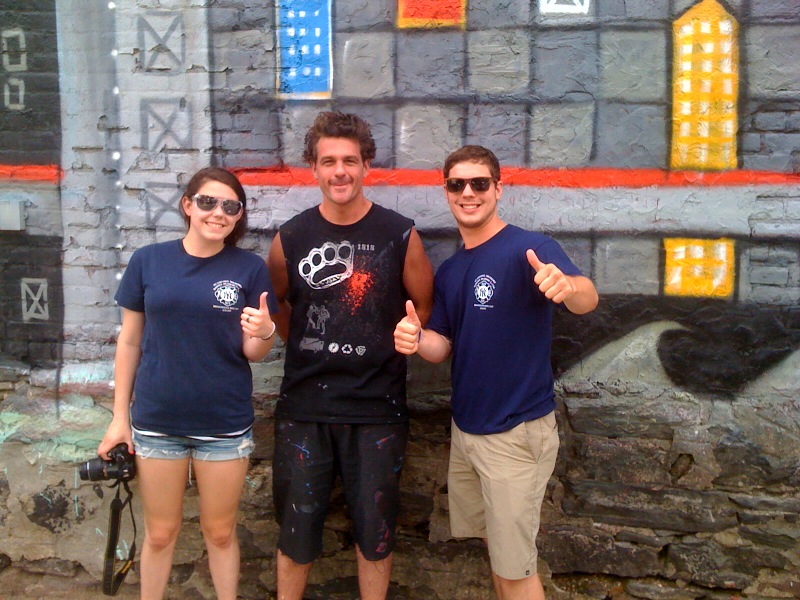 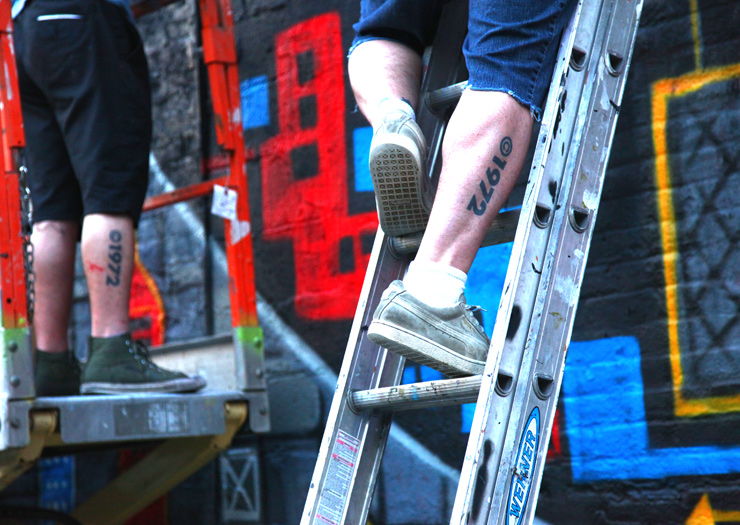 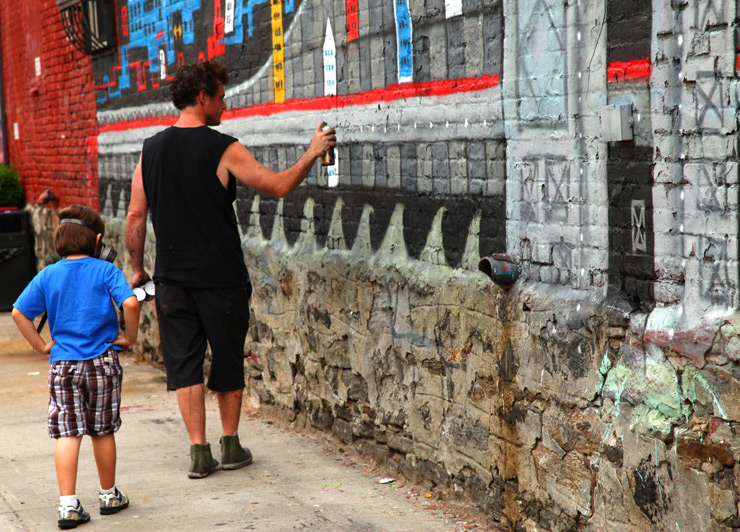 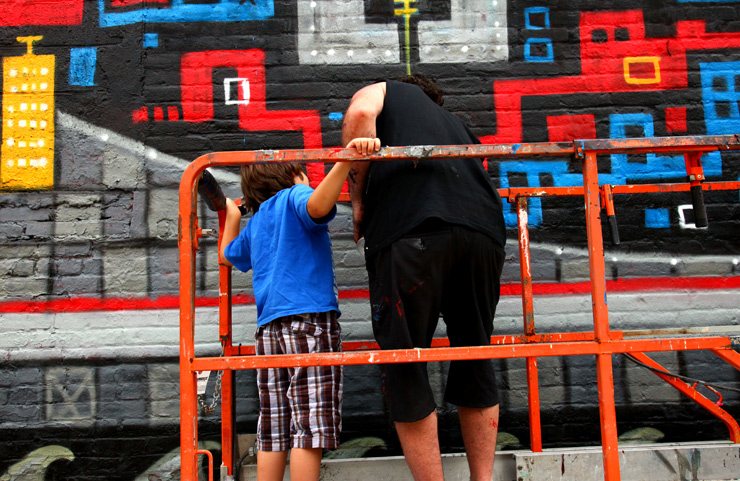 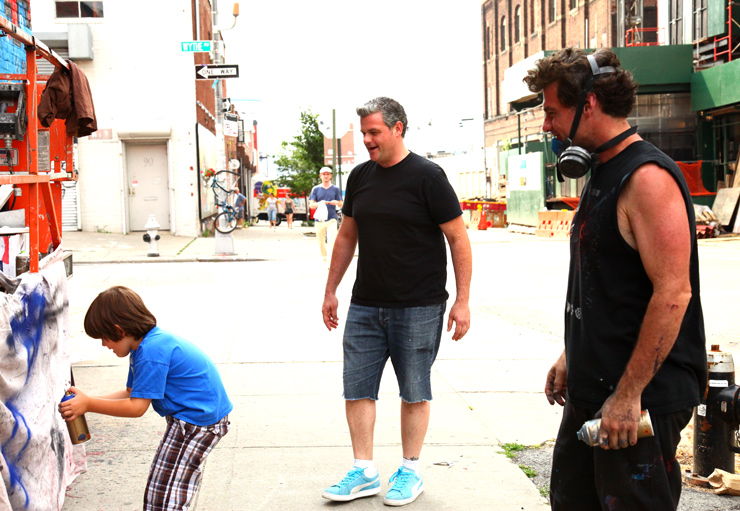 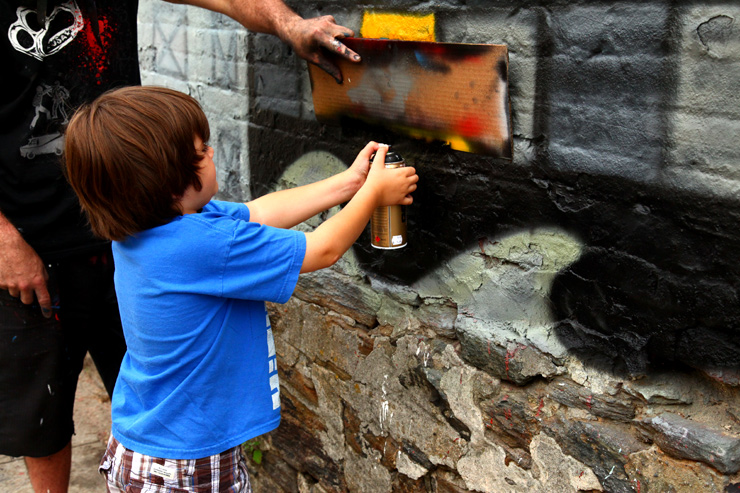 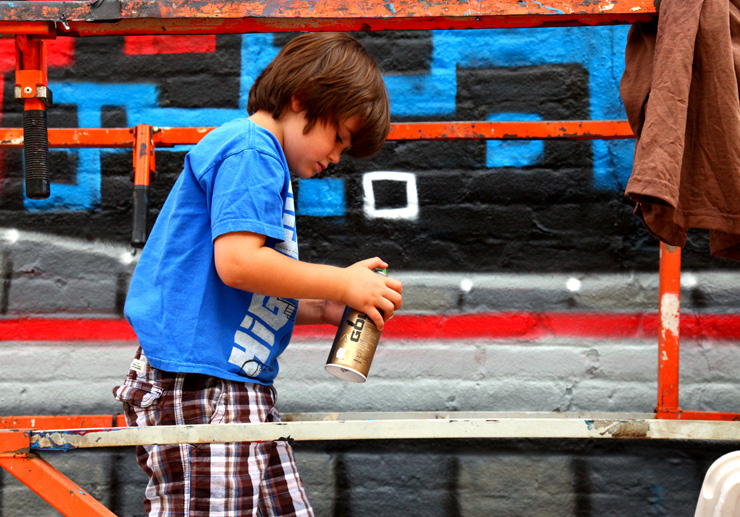 Skewville: The Next Generation. And on the lift, can in hand. (photo © Jaime Rojo) 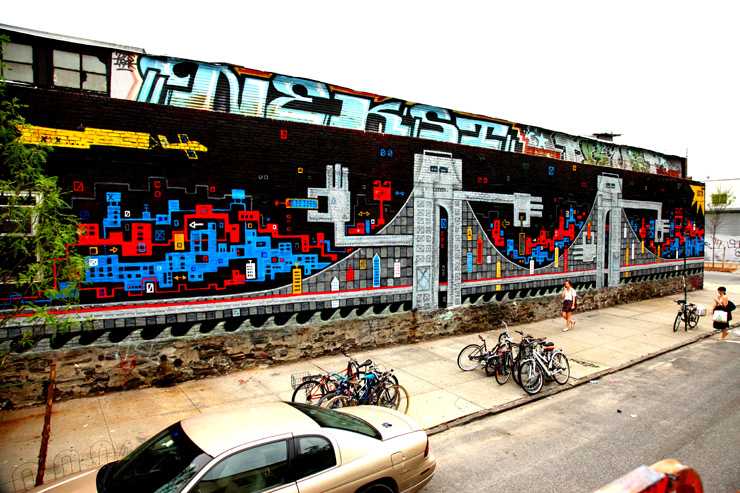 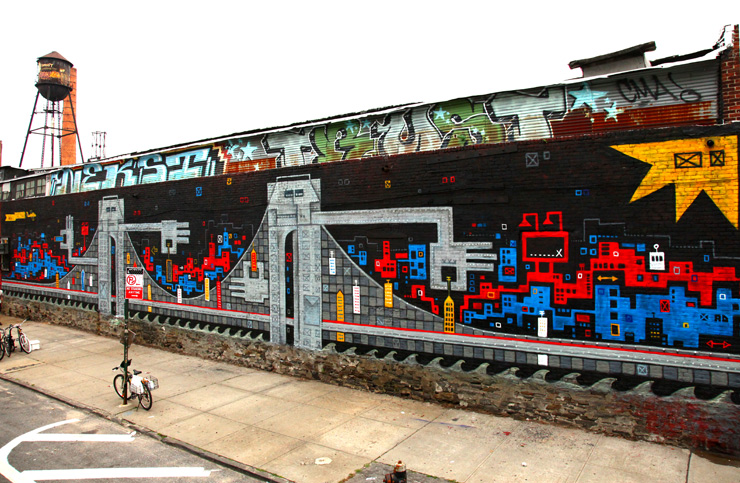 For his part, artist Jon Burgerman shuffled from his apartment in his bathrobe and slippers up the block to deface a perfectly nice car with his doodling.  An artist who avoids labels, today he was a Street Artist, and as you can see by the photos, a vandal. When not doodling he was busy flashing crowds as a steady stream of CrestFest attendees filed past him on the sidewalk taking pictures and striking up conversation while the international man of markers dutifully created characters and patterns and contemplated feelings of ennui and jetlag. 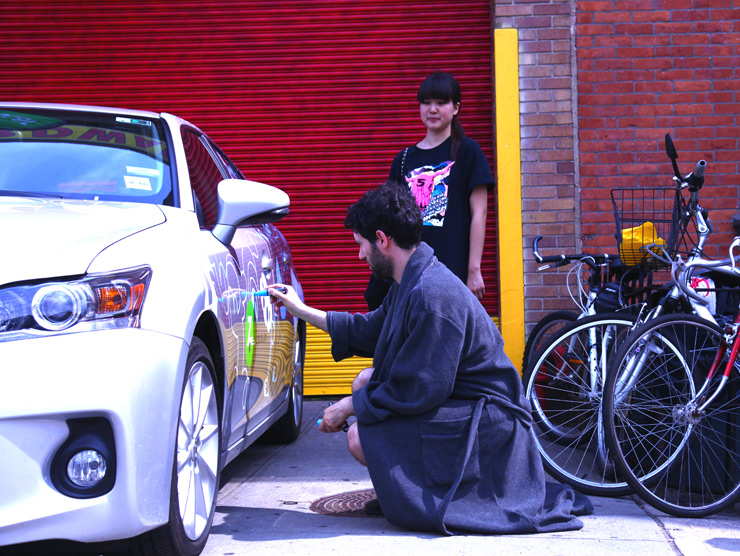 One perfectly normal looking but frisky senior found his bathrobe rather compelling and she demanded to know what he was wearing underneath it. For the benefit of all humankind we got a shot of his ensemble too. You’ll notice it’s always the shy reserved ones who have the racy boxers. 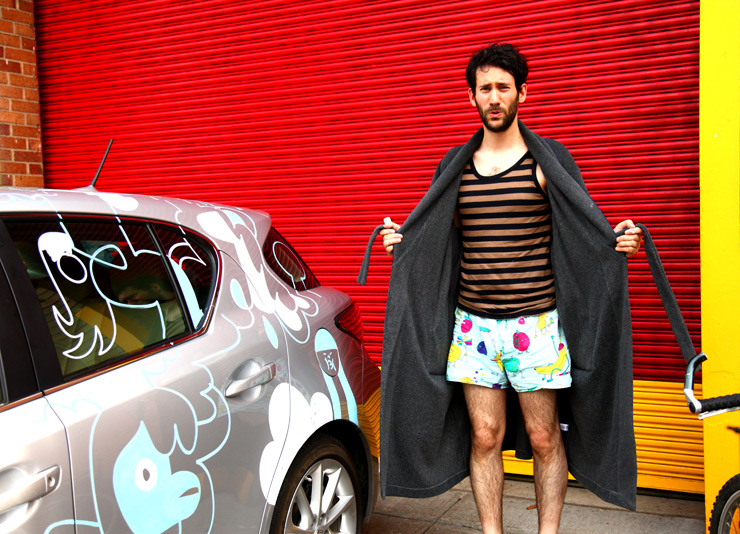 If this drawing thing doesn’t work out he can always try out for the Rockettes. Jon Burgerman. (photo © Jaime Rojo) 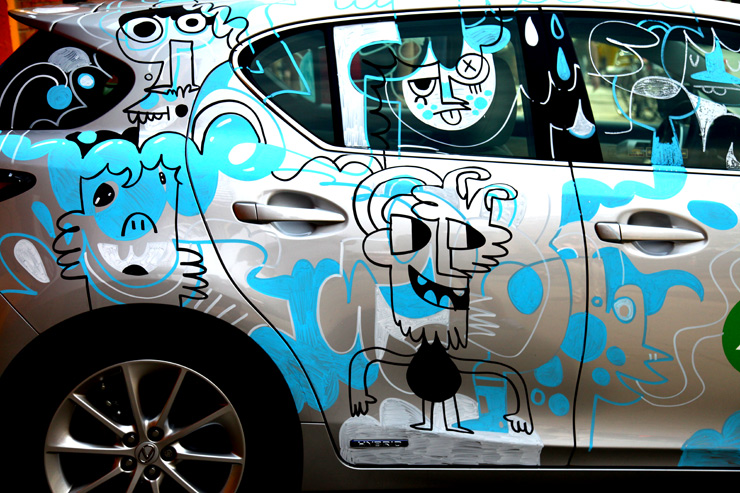 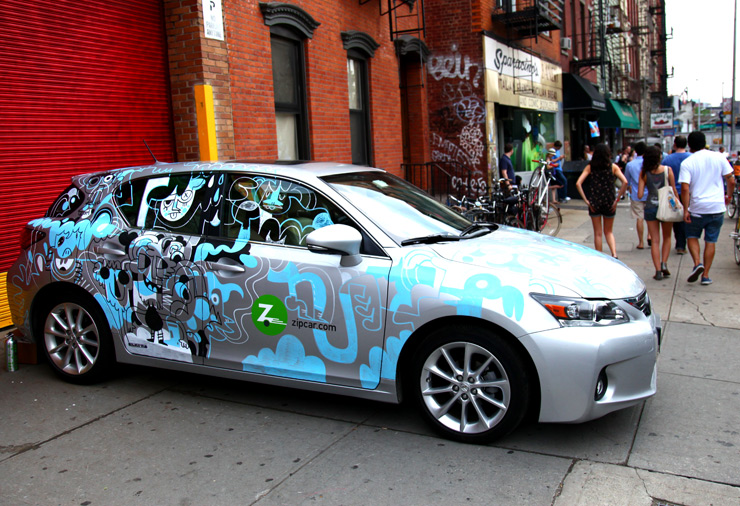 Then, like mixing peanut butter and chocolate, some sort of perfection was achieved when we hopped in the Burgermobile and went to visit Skewville and friends and park right in front of “Last Exit to Skewville”. Each artist feigned interest and admiration for the others work and gave back-handed compliments freely before we headed to a rooftop in Greenpoint for a beer at the NOS Launch party and to watch the sunset and revel in the creative fog that slowly enveloped North Brooklyn. 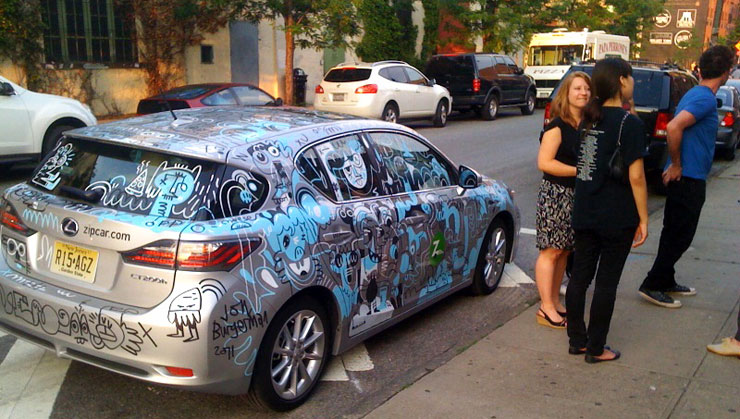 Jon Burgerman signed the back bumper before we drove through Williamsburg honking the horn and trying “draw” attention to ourselves. Draw. Get it? (photo © Steven P. Harrington) 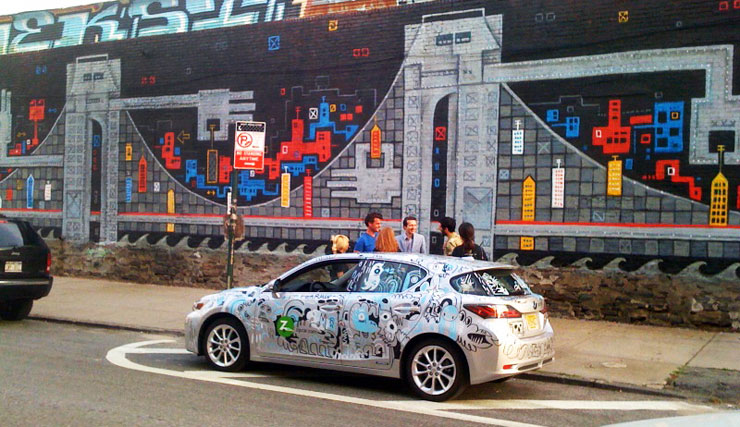 Special thanks once again to Crest Hardware and Montana Colors for their generous paint support. Zipcar was a sponsor of Crest Fest, and provided the car and posca markers for Jon Burgerman.

Thank you also to Joe Franquinha and Liza Shields from Crest for being such swell partners and stellar people and to Jennifer Galatioto, Joann Kim, and Leia-lee Doran and all the volunteers and artists and performers from Northside Open Studios Festival who helped us have a fun night at the launch party at “The End”.

Andrea "RAVO" Mattoni in Corbeil-Essonnes With da Vinci
Aerosol in pursuit of the “Masters” (Eurocentrically speaking) is a permutation of Street Art and the mural making tradition going back decades, including murals made directly by “Masters” (Latino-ce...
Tatyana Fazlalizadeh: When the Lion Roars Back, a small overview
We're excited because today we get to spend a few minutes on stage with one of our hometown heroes, the artist Tatyana Fazlalizadeh. Leveraging her artistry with her politics with her desire to suppo...
BSA Images Of The Week: 07.21.19
Dog days of summer be damned, the Street Art in all of its fabulous illegal varieties, the true Vox Populi (and self-advertisment) persists and insists through the streets this July. On the t...
BSA TALKS @ URVANITY MADRID 2019 / RECAP
We had a question going into the BSA Talks program at Urvanity in Madrid earlier this month: How deep is the street? Turns out it's very deep. We had 10 minds from different countries and discipl...
Could We Kill a Panda The Same Way We Kill a Bull? Michael Beerens in Paris
The Bullfight! The historic tradition! The glorious danger of a confused and raging bull ready to charge at his tormentor. The bulging manhood of the Matador as he proudly steps around the coliseum in...
Ad DeVille Ali Ha Brooklyn Street Art Crest Fest Droo Deville Jaime Rojo Jon Burgerman Last Exit to Skewville Northside Music Festival Northside Open Studios Skewville Steven P. Harrington Street Art