Brooklyn Street Artist Skewville, one of this city’s original sons, has been coaxing from his imagination a cityscape of intrigue and sly humor. With a bluntly cockeyed optimism tempered by the reality of kooks and freaks and madmen who run the streets and boardrooms in this city, over the past four days Ad Deville has been climbing and spraying and blocking out the giant chess game that is always at play.

After weeks of talking about where to take this piece called “Last Exit to Skewville”, the dude shows up with a piece of paper folded in half and a loose line sketch of the span of a bridge, chewing on the end of a pen. An amalgam of the bridges spanning the glittering and stormy East River, the pylons are two opposing chess players using the buildings of New York as chess pieces. As perspective is clarified above the river, a clunky cityscape emerges; a color punched rumbling blinking playground that calls you to jump across it’s rooftops and avoid falling. 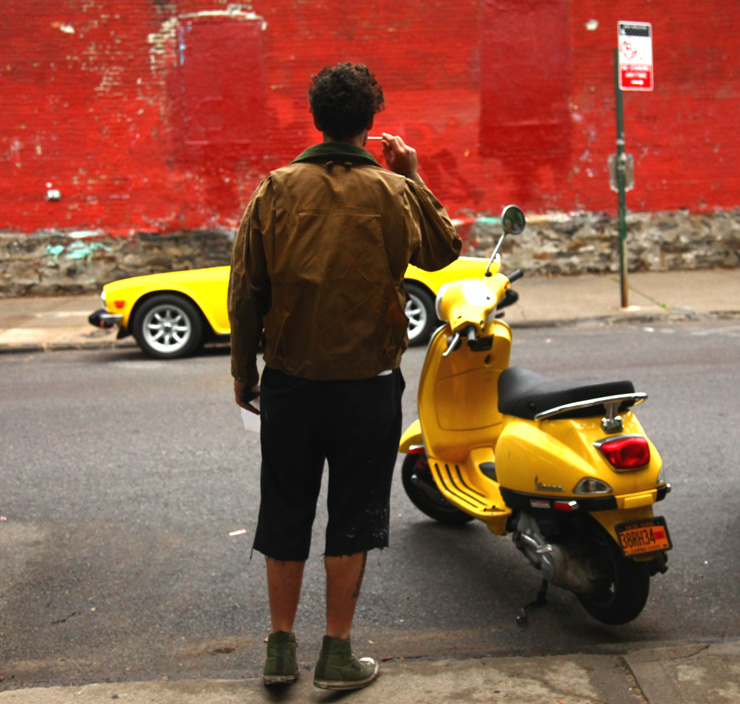 Skewville; Saturday. At the begining there was a big red empty wall, a pen, and a folded piece of paper with the span of a bridge drawn on it. This photo literally captures the instant Ad Deville stepped off the curb to begin marking out the piece. (photo © Jaime Rojo) 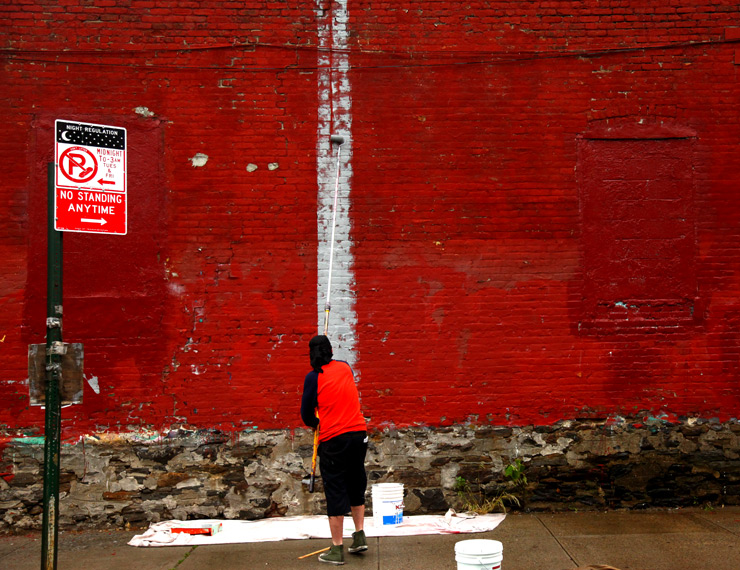 With his hands and arms and buckets and and rollers and cans he paces the length, climbing up and down ladders, blocking out the sound of traffic cacophony behind him and stepping aside for rain bouts; hour by hour the shape of the cubist and blocky abstractions that make a vibrant and shadowed city start to pop from this bricked Brooklyn wall. 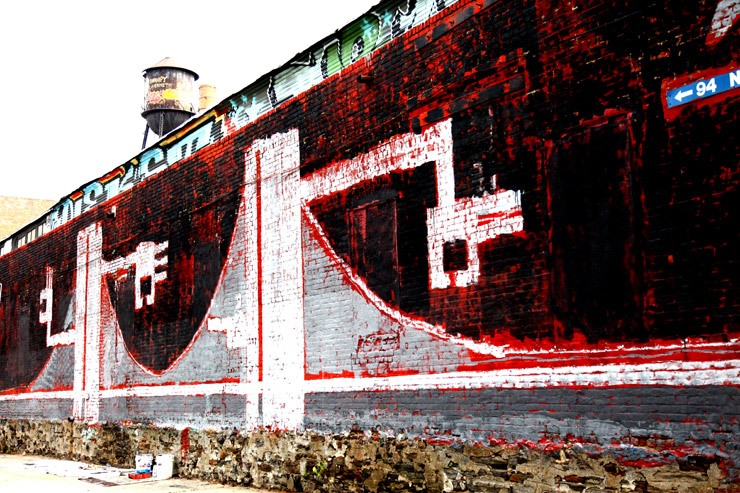 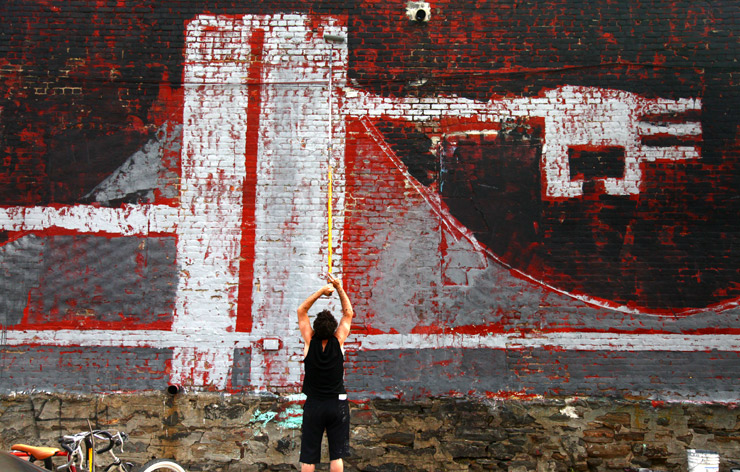 At this rate, Skewvilles’ finer graphic elements will arrive right on time as the week ends. Coming soon – marauding crowds of cleverly dressed, smart and sinuous music and art fans will swarm like honey bees in the streets of Brooklyn’s Northside. With maps and photo snapping cellphones in hand, they’ll see the installations in the streets, the artists in their studios, and Beirut in McCarren Park. 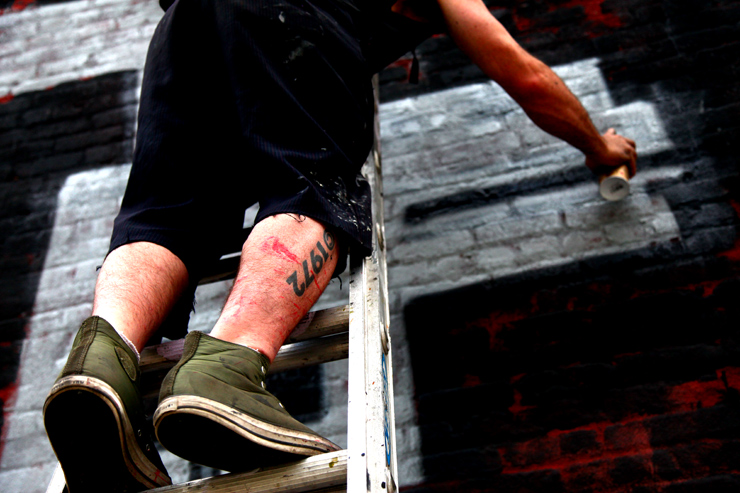 Northside Open Studios, The Crest Fest 2011, and the Northside Music Festival – This is the new Brooklyn, much like the old Brooklyn, where neighbors coalesce and celebrate and intermingle and where Saturday Adam Deville of Skewville will commander a scissor lift lofted high above heads to put the finishing touches on this ode to Brooklyn and New York and (dare we say it) his masterpiece. 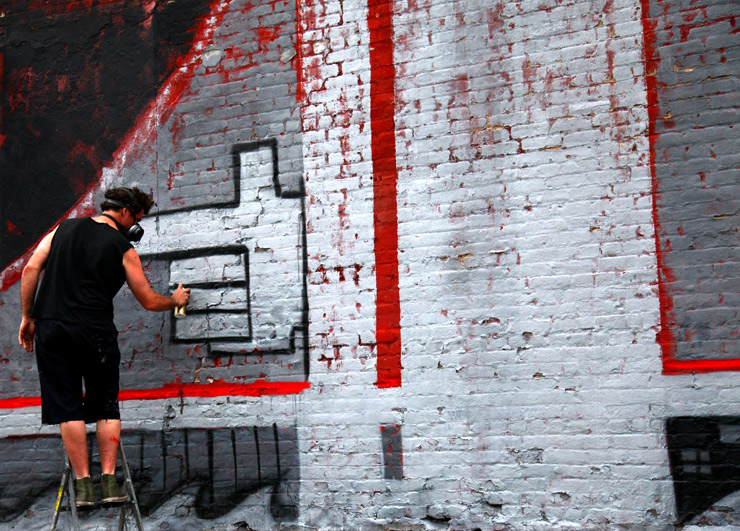 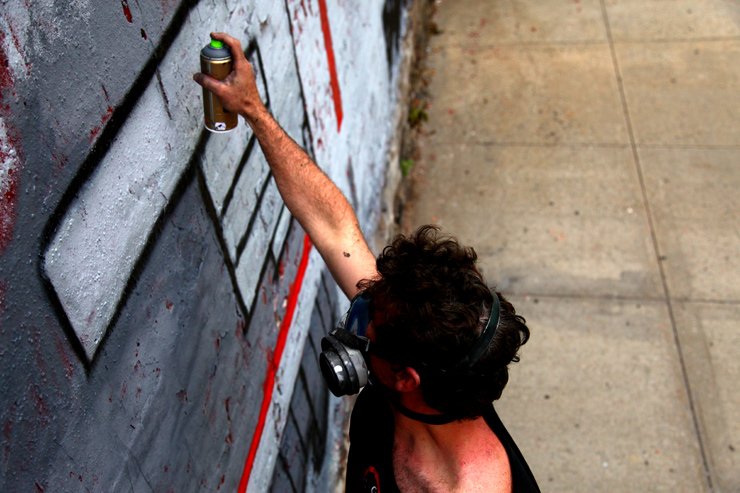 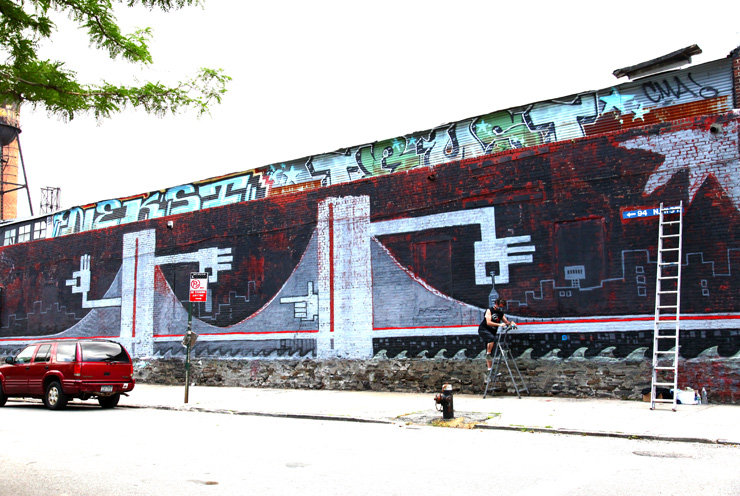 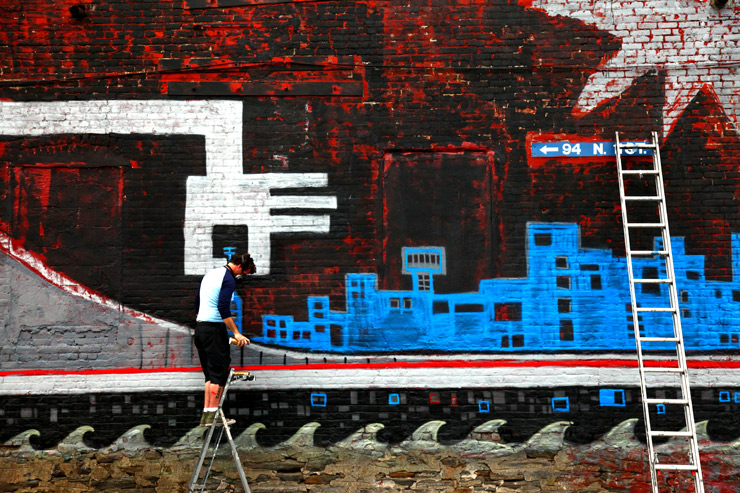 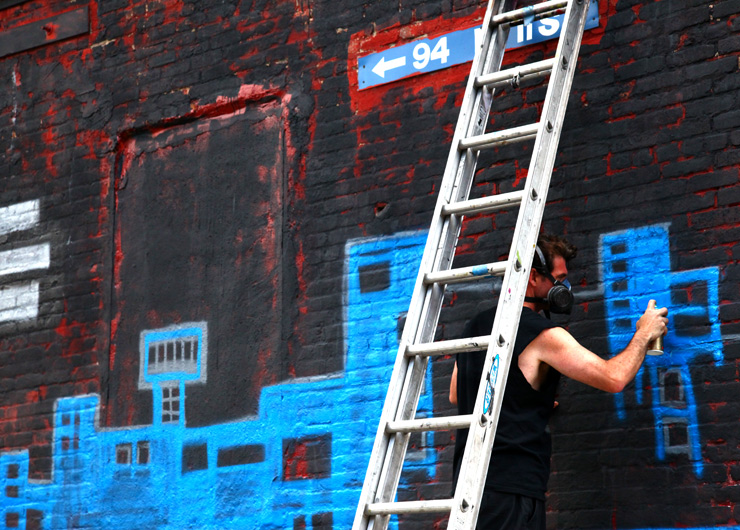 Skewville. Like any artist who knows that stretching is necessary for growth, Tuesday is the day Skewville extends his vocabulary with new untried color – an unusual addition carefully approached. (photo © Jaime Rojo) 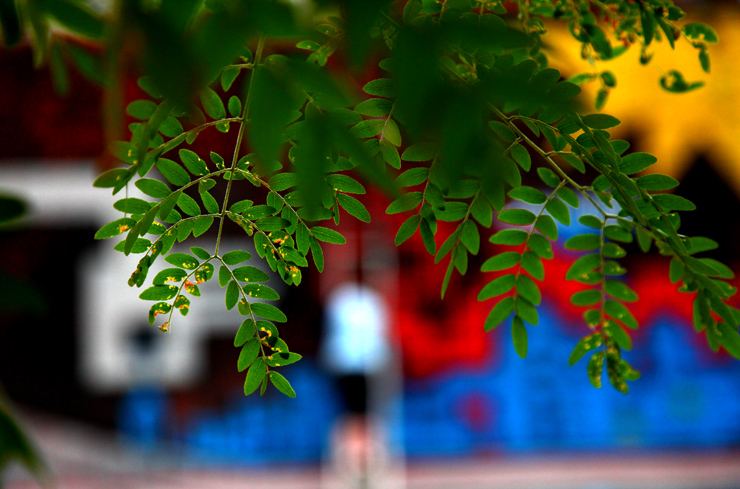 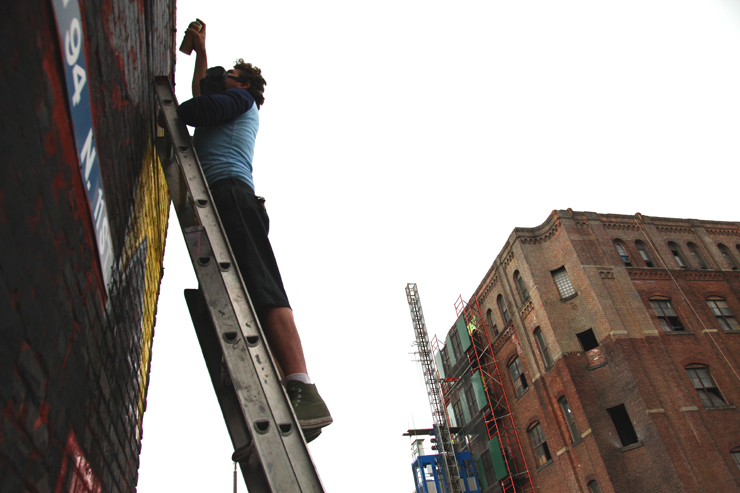 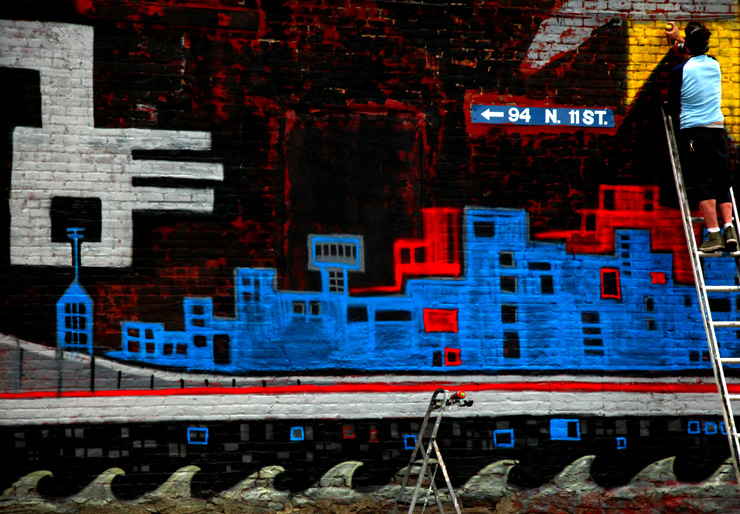 Skewville. Uniform waves lapping up the East River can easily be mistaken as the fins of sharks. (photo © Jaime Rojo) 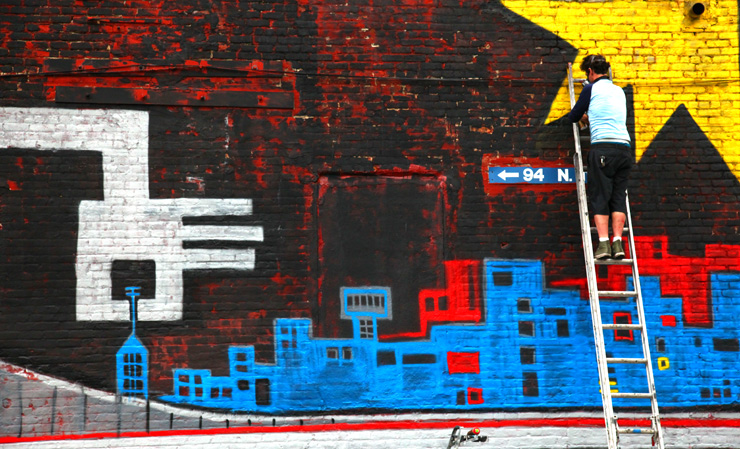 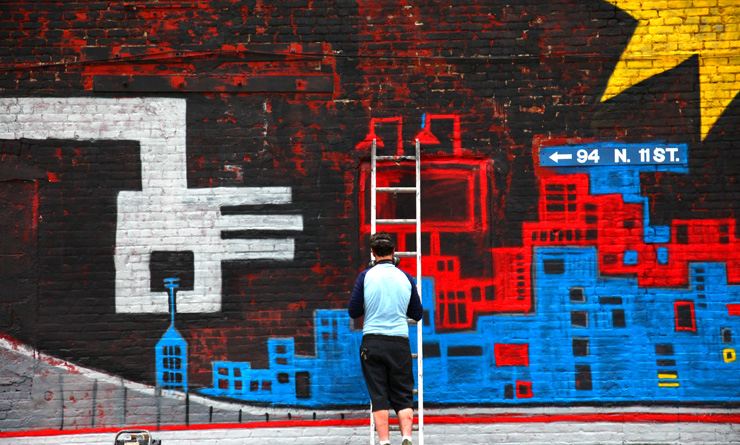 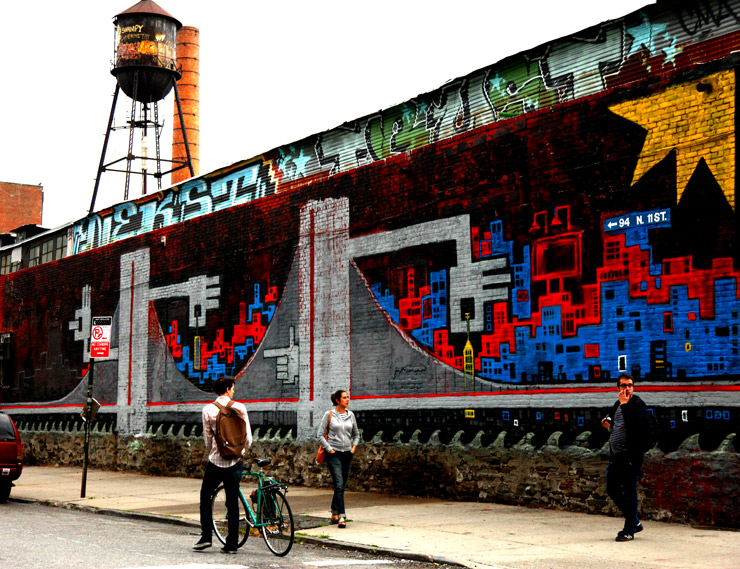 With the generous support from local family owned Crest Hardware Store (home of Crest Fest 2011) and Montana Colors, this project is possible.

at The END in Greenpoint! Bands, Installations, and a Bikini Reading Series on the Roof.

Koralie's Trippy Folk Precision is Harmonized for "Indigo Blood Project"
Former French Street Artist Koralie is currently having an extensive solo gallery show of paintings, sculpture and installation with Johnathan LeVine Projects in Jersey City, and her geisha is not har...
FIKOS "Earth and Sky", Massive Byzantine Painting in Kiev
Is this the world’s largest Byzantine painting? Graffiti artist and an iconographer in Orthodox Christian churches, Fikos is going for the record here in Kiev. " With 46 meters height, this is the l...
Wall\Therapy 2015 Begins in Rochester, NY
Rochester's Wall\Therapy mural festival began in earnest this weekend with a fine art show at 1975 Gallery and arriving artists beginning to prime their walls and sketch the outlines of the works th...
BSA Images Of The Week: 03.22.15
Can we please not talk about snow? Spring, you temptress. Here's our weekly interview with the street, this week featuring Angelina Christina, Bifido, BiP, Bortusk Leer, C215, Chris Stain, Crum...
We Love Paris In The Spring Time! New Shots of Street Art.
When Cole Porter wrote “I love Paris in the Springtime!” in 1953 he probably was thinking of showgirls and their suitors and the wickedness of the Montmartre dance halls in the 1890s, but when photogr...
Brooklyn Brooklyn Street Art Crest Fest 2011 Crest Hardware Jaime Rojo Montana Colors Northside Open Studios NYC Skewville Steven P. Harrington Superior Wall