Tony’s gallery is delighted to present ‘Bortusk took a trip’, the first solo show by UK artist Bortusk Leer. Since bursting onto the art scene in 2007, Bortusk’s naively spray-painted and marker penned monsters have become a common sight on the streets of London and New York . For the inaugural exhibition at Tony’s, Bortusk Leer will present a site-specific installation alongside a selection of recent paintings and sculptures.

‘Bortusk took a trip’ invites the viewer into the inner reaches of Mr. Leer’s psychedelic mind and takes you back to the fun and carefree days of our childhood. Transforming the gallery space into his private playground, we are invited to experience it as an opportunity to step out of the doom and gloom of our daily routines. An exhilarating mixture between a funfair, cartoon and rave party feel, the show’s only intention is to put a smile on your face and brighten up your day!

Bortusk has named his style ‘art comedy’ and dedicates himself along with a growing team of admirers and pasters to spreading the smiley faced, lolling tongued, and googly eyed LOVE around the world….Bortusk’s heavily satirical work and recognisable paste ups using newspaper as the support and method of spreading his own message, highlights an ongoing concern to challenge the idea of traditional mass media and mass produced objects. These acts of mischievous sabotage using obsolete objects and materials represent in fact another unconventional choice of his to use low-tech procedures to emphasis the often ephemeral nature and lifespan of these randomly applied paste-ups within our urban landscape.

These garishly coloured characters have travelled by sea and air to reach walls as far away as Auckland , Alaska , Jodphur and Barcelona and catching a glimpse of one of these little creatures in a dark corner or grim alleyway always brings a familiar friendly face to these far-away lands. These characters always seem to make themselves at home in their surroundings, be it taking a yellow cab in the Big Apple or tucking into a bratwurst in Berlin .

Over the past 3 years Bortusk Leer has exhibited in several London based group shows such as The Alternative Philosophy at Leonard Street Gallery and Mutate Britain at Cordy House with an array of big names in the street art scene. During the course of these shows his work has strayed into the realms of video, collage and sculpture, re-awakening an interest in 3D and installation art. Also in 2009 Bortusk’s monsters were made into ‘Street Monsters’, a series of 2 minute animations which were commissioned by the BBC.

Bortusk Leer shows no signs of slowing down, currently working on his first solo show in New York and cooking up some plans for further television take over. This top hatted avenger is only just warming up. 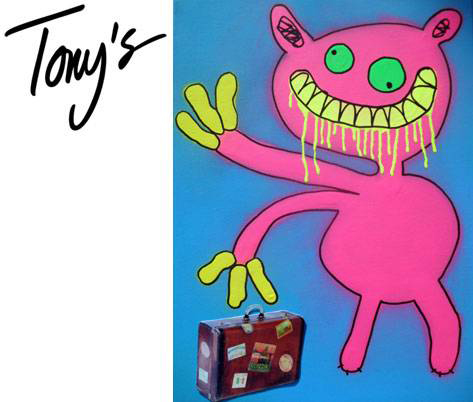 Cey Adams, Sophia Dawson and Marka 27 Speak Against Police Brutality
It's when you have an opportunity to see a piece of art on the street in person. The combination of portraits, graphic design, and text treatments may spring more from the imagination of those in the...
The Outings Project, Bouguereau, and a Memphis Factory Facade
Julien de Casabianca of the Outings Project was invited to the Brooks Museum in Memphis, Tennessee last month for an exhibition, workship, lecture, and a monumental installation that we have exclusive...
BSA Film Friday: 09.22.17
Our weekly focus on the moving image and art in the streets. This week we feature videos of installations and a tour of the "UNSTOPPABLE" exhibition by Jaime Rojo at the Urban Nation (UN) museum o...
Images Of The Week: 05.11.14
Happy Mothers Day to all the moms, mommies, mama, mas, mutters, madres, and variations on loving female caregivers out there. Thank you sincerely from the bottom of our hearts. Been a huge week...
Chris "DAZE" Ellis: The City Is His Muse
Active on the city’s urban art scene since the 70s and 80s as a teen hitting up trains on the Broadway line, this New Yorker transitioned to studio art thirty five years ago and never lost his love fo...
Bortusk Leer Brooklyn Street Art London Tony's Gallery U.K.