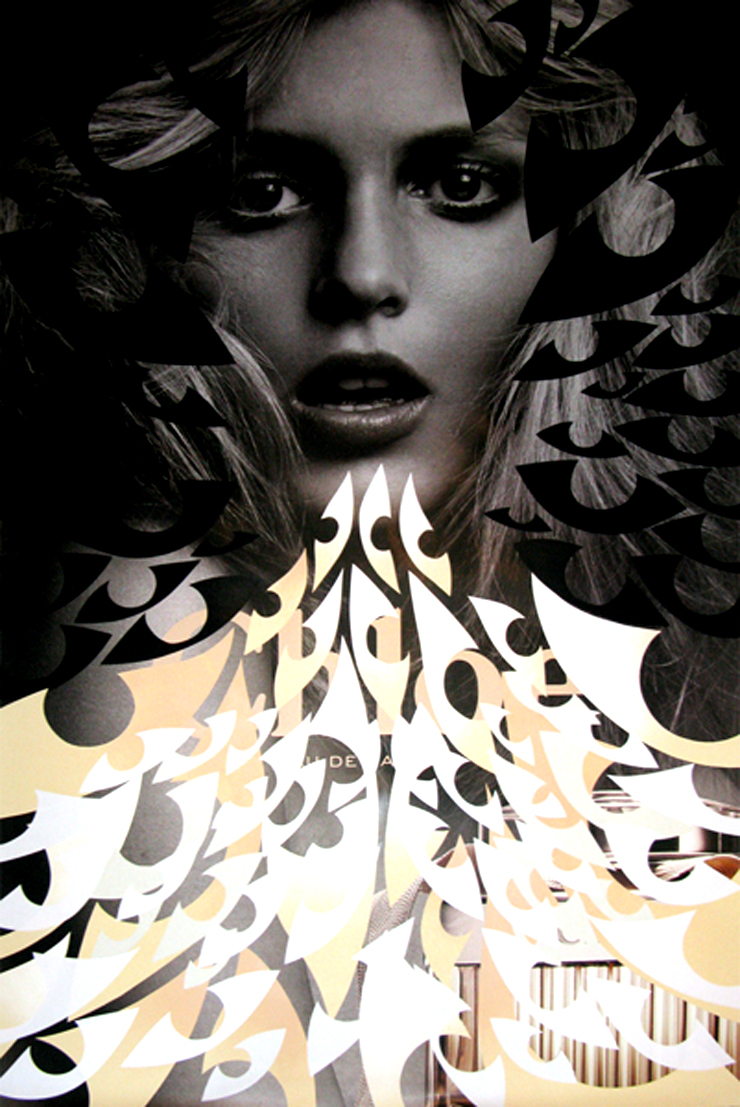 “According to Mayan prophecy and the Doomsday calendar, the world will end in 2012. Geomagnetic reversal, asteroid strike or supernova; at least we’ll miss the bloody Olympics”

One of the first generation of Street-artists; Mysterious Al gained international notoriety alongside D*face for his part in the infamous ‘Finders Keepers’ illegal art events.
In a career spanning almost a decade, Mysterious Al has shown in group exhibitions globally, as well as working with leading brands such as Adidas, Eastpak, Volvo, Orange and Yahoo.

Stolenspace is thrilled to present ‘The Doomsday Papers’; a selection of works in mixed media including wood, paint, newspaper, magazines, torn Bible pages and installation.

“As we prepare to enter what is being described as a new cycle of civilisation, I’ve become increasingly interested in different cultures and their beliefs, as well as my own thoughts and fears on mortality and fate. History is constantly being written… From the wonderfully elaborate depictions of Mayan Gods to mass-market celebrities, cult fiction and present-day witchcraft. What happens if all these humanities mix together? If these worlds collide?”

Images Of The Week: 12.01.13
It's December yo! The tree is getting lit this week for the tourists and New York art folk are headed to Miami for the ever-more-air-kissed Basel. We're still recovering from Thanksgivikku...
BSA Images Of The Week: 03.03.19 - Madrid Special
What a blast it has been this week in Madrid - on the street and on the stage with curators, artist, urban planners, professors, researchers, disrupters, and dreamers. We're happy we managed ...
Valencia Dispatch: Illustrators, Thinkers, and Riddles
Thought provoking, curious, underplayed. There is a certain circumspect quality to the Street Art scene in this seaside city in Spain that ranks third in population but which may be vying for the Stre...
Largest Piece by BustArt in Tegel, Berlin for Urban Nation
Massive and bright and staring at the summer sky, the new mural in the Tegel area of Berlin is quintessential BustArt. Two decades after starting his mark-making as a Swiss graffiti writer, his style...
"Occupy City Hall" Turns Into "Abolition Park"
Occupy City Hall is a movement that appears to bear a very close resemblance to the Occupy Wall Street movement nine years ago. Born with the protests against police brutality and the murder of Georg...
Brooklyn Street Art London Mysterious Al Stolen Space Gallery U.K.