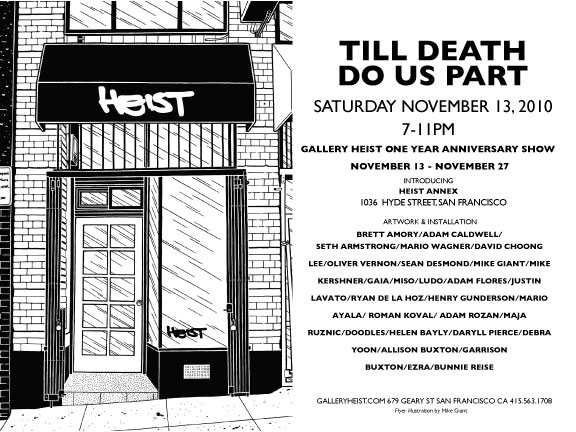 TILL DEATH DO US PART

Show, “Till Death Do Us Part” a group exhibition celebrating a year of work

since the gallery’s inception. The opening will be held on Saturday, November

A new venue specific to the anniversary show.

The anniversary show will present the work of emerging and established contemporary figures from the Bay Area, as well as artists hailing from New York, Los Angeles, Paris, and Melbourne.  Along with paintings, photographs, mixed media works, and video, the show will include an installation by Ryan de la Hoz and a performance piece by Adam Rozan (of the Oakland Museum), as well as musical performances by Mark Aubert and TM.

Guest curators Allison and Garrison Buxton, of AdHoc gallery in NYC, will be co-curating and co-hosting the exhibition.

The main location of Gallery Heist, at 679 Geary Street will feature an installation that will provide  an opportunity for viewers to observe the obscured process of curating and running an art gallery.

Included in the installation will be various pieces of ephemera from the first stages of opening the gallery through the thought processes behind every show; photos, videos, notes, business cards, correspondence between the curators and artists, writers, editors, and figures within the art community will be displayed.

In conjunction with the exhibition, the artists will have access to several walls around the city to use as their canvases and to promote the show while contributing to the burgeoning local art movements. This process will be documented and displayed during the exhibition.

The exhibition will be on view at 1036 Hyde Street from Saturday November 13 – November 27, 2010. Viewing hours will be Tuesday – Saturday 4-8PM and by appointment. Gallery Heist is located at 679 Geary Street San Francisco, CA 94102.

Art is an extension of our culture and communities, serving as a vessel for the visual definition of our times. Art is not a luxury; it is a necessity.

Our mission is to foster innovative artistic expression and provide a sanctuary for the creative process and its importance and role in the redefinition of contemporary culture. Gallery Heist is a place for artists to gain exposure and develop their careers.

We encourage freedom of expression and experimentation within their work and artistic ideas. The walls of Heist will continue to house work that is representative of the contemporary generation, offering a venue for artists who challenge and analyze our social and cultural responsibility, traditions, and behaviors; specifically those who are leading the front of a conscious art movement.

Gallery Heist was opened in November of 2009 by twenty three year old Julianne Yates and has since become a destination for urban & new contemporary art in San Francisco. Located blocks away from the commercial galleries of downtown San Francisco’s Union Square, the gallery lies near the historical Tenderloin, which sees a demographical mix that serves as a microcosm for the whole of San Francisco.

Colombia Diary: The Completed Works, The Gold Rush, and the Jaguar in You
Today a wrap up of BSA at an unusual location in Colombia to see a new initiative with Street Artists in an abandoned distillery brought back to life with their imaginations and penchant for transfo...
"Tracing Morocco", Hendrik Beikirch
Dignity in “Tracing Morrocco” gives pause, requests your consideration. Last year we wrote about Hendrik Beikirch's journey to Morocco, The Trades. With the support of the Foundation Montresso he emb...
Philadelphia Mural Arts, A Golden Age
It is a rainy day in Philadelphia, but you can’t tell it by listening to Jane Golden. After 30 years and countless meetings with community groups, artists, city agencies, elected officials, volunteer...
Vinz in New York Draws Attention to Fracking and Italian Sculpture
VINZ was in town recently and left a few of his amazing labor intensive paintings that highlight the world of natural beauty and hybrids. Remember when George Bush warned us about this in his State of...
New Video for Project M/3 at UN Site in Berlin
Here's a fresh video (below) completed yesterday that shows a little of the excitement and machinations behind the scenes of the Project M/3 in Berlin, as well as dramatic foreshadowing of the UN. Dir...
ad hoc arts Adam Caldwell Adam Flores Adam Rozan Allison Buxton Brett Amory Brooklyn Street Art Bunnie Reise CA Daryll Peirce David Choong Lee Deborah Yoon Doodles Ezra Li Eismont Gaia Garrison Buxton Heist Gallery Helen Bayly Henry Gunderson Justin Lavato Ludo Maja Ruznic Mario Ayala Mario Wagner Mark AubertTM Mike Giant Mike Kershner Miso Oliver Vernon Roman Koval Ryan de la Hoz San Francisco Sean Desmond Seth Armstrong Shawn Whisenant